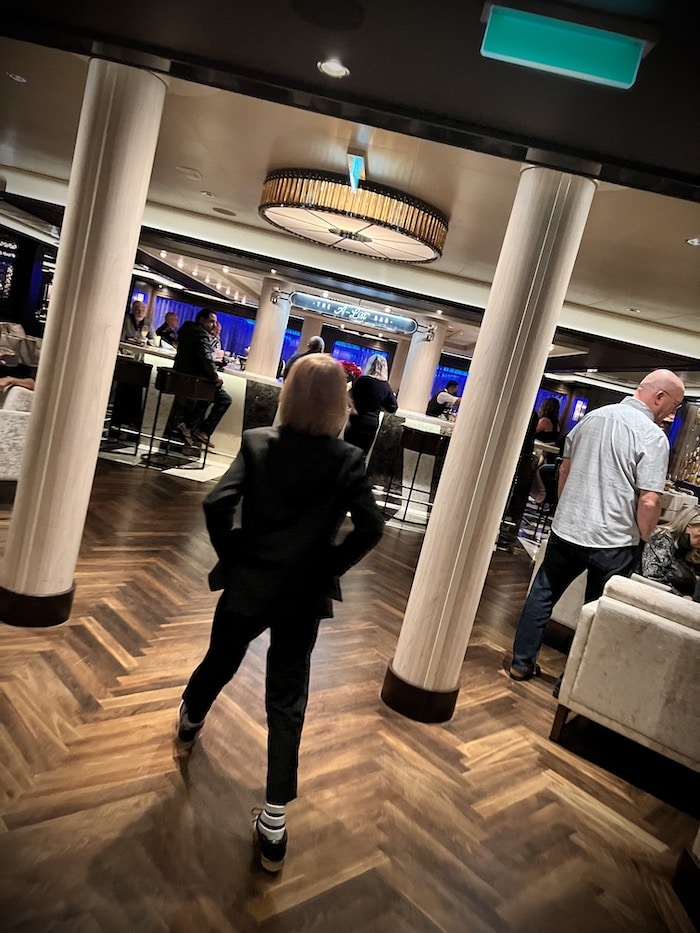 Is dining on Norwegian Cruise Lines really any good, and is it worth the sticker shock splurge for a “luxury cruise within a cruise”? About a trip that perhaps should never have happened in the middle of a Covid-19 surge.

Packed into what looked like an airplane hangar in San Pedro, thousands of cruise travelers stood in line to get their rapid antigen Covid test before boarding the Norwegian Bliss, a massive cruise ship that carries over 4,000 guests and 1,700 crew members. After hours of lining up, getting tested, and then waiting for negative test results – we all got transported by bus to the actual cruise terminal, to check in and eventually board the ship. The cruise industry was severely hit by Covid-19 restrictions, and we’ve all read the horror stories from ships floating seemingly without direction on the oceans during different phases of the pandemic – when no ports would allow them to dock due to onboard outbreaks among crew and guests. But with rules in place that all crew and guests would be fully vaccinated to be able to board the ship, as well as pre-boarding covid testing – we still felt rather comfortable that we’d be able to be safe onboard the Bliss.

That was our first mistake.

Like many others in the industry, Norwegian Cruise Lines (NCL for short) have been betting heavily on larger ships with over the top attractions like go-cart tracks, water slides and laser tag arenas – as well as an increased focus on a more modern approach to food and beverage. Long gone are the days where cruise travelers would suit up in their best evening outfit to have dinner at the same table, at the same time every day (although you can still opt in to the traditional dining system). Instead, a plethora of specialty dining options are scattered across the ships, ranging from Asian fusion, sushi and Mexican street food, via craft beer pubs and whiskey bars, to French and Italian establishments with fine dining ambitions.

As part of the move to cater to a more upscale crowd, NCL launched The Haven almost a decade ago. Marketed as a “luxury cruise within a cruise”, it is a secluded and private area within Norwegian Bliss’ upper decks, with its own pool, lounge, bar and restaurant. Additionally, all Haven suites (larger than the normal cabins) are served by butler service and have priority access to disembarkation at all ports.

Honest Cooking decided to take the trip south from Los Angeles, to board the Bliss and The Haven in the final week of December. Our goal was to sample as many and as much of the menus onboard the ship during our 7-day cruise, to finally assess whether NCL’s boasting about their fantastic onboard-gastronomy was real – or if it was just lip service in the pursuit of a new, more food centric crowd.

This was our second mistake.

Now let’s start by stating the obvious. With dozens of restaurants and bars onboard, it’s more or less impossible to try them all in the span of just one short week – and going deeper into menus would have taken multiple cruises. But there are some things we can definitely conclude. First and foremost – NCL still focuses more on quantity than quality when it comes to food. Prepare to be constantly stuffed throughout the cruise! Portions are large, and that’s part of the problem, but since cruise ship dining packages include several courses for every single meal – and the crew works very hard to get you to try as many courses as possible even at breakfast – you have to be incredibly disciplined to stick to a calorie count that is below 4,000 per day. Now, what’s the problem with that? Isn’t the whole point of going on a cruise to eat and drink constantly? Sure, but it does take a little bit of the joy out of it if you go into every single meal already feeling like Mr Creosote from Monty Python’s “The Meaning of Life”. At one point during the cruise, we ended up calling the Bliss the “Bloat-Boat”.

But perhaps more importantly, when you’re providing what’s essentially an “all you can eat” menu for every single meal at every single restaurant, it’s perhaps not surprising that the quality of the food you serve will have a hard time keeping up.

Which brings us to the next problem. The actual food itself. It’s not all terrible. Some of it is decent. Most of it is “meh”. Nothing is great.

The steak at Cagney’s (one of the specialty dining options that come at a premium price) was ok, but doesn’t live up to the top steakhouse level that you’d get in any half-decent food city across the globe. The sides are many and very filling, but lacking in punch and flavor. The wine list was pandering to a crowd that’s insecure about their wine choices, thus becoming rather uninspiring.

The Haven Restaurant, which is the exclusive private restaurant for the 100 or so Haven guests that have paid a significant premium for access, serves up breakfast, lunch and dinner every day – with a menu that doesn’t change. And again, the food is just “okay”. The kitchen seems to be more comfortable with traditional comfort foods like burgers and sandwiches, while more sophisticated menu items lack in depth and presentation.

At Le Bistro, a French themed restaurant with heavy interior (which makes it not feel like a bistro at all) has a promising menu with escargots, hand cut steak tartare and a filet de beuf Rossini. But the snails come out rather cold, under-seasoned and bland. Under-seasoning is the theme of the tartare as well, and the Rossini comes with a tiny low quality slice of foie gras and a filet that leaves much to be desired.

The Teppanyaki restaurant? Benihana is better.

We can go on about every single restaurant on the ship, but I think you get the gist. It’s not that good.

The one restaurant that actually manages to deliver something of a flavorful dining experience is Food Republic, an global cross-over restaurant that’s largely overseen by a lot of travelers. The menu is all over the place, from Mexico, to Japan, to China, to Peru, to Thailand and back. But the food is good, vibrant, lighter and fresher than anything else on the ship. Would it have made it as a standalone restaurant ashore? Probably not, but if you have to go on an NCL cruise – this is where you will have to eat most of your meals.

Now, apart from the disappointing food experience – any Covid-safety measures that NCL had in place didn’t work. By day three of our 7-day cruise of the Mexican Gulf, our butler suddenly disappeared. The day before he had spent 45 minutes together with us in our suite planning our son’s birthday, but he was now nowhere to be found. He called in, clearly congested, and just told us that someone else would be looking after us in the coming days. Was he sick? Did he have Covid? No one told us. No one reached out and asked us how we were doing, or if we had any symptoms. Instead, another crew-member accidentally spilled the beans. Our butler had tested positive for Covid, and he was now in quarantine.

NCL had no plans at all to inform us about this, so instead we were forced to make some difficult decisions on our own. We had spent hours in the company of the butler in the days previous. Were we infected? What should we do? We decided to enter a sort of self-imposed semi-quarantine ourselves, mainly venturing out to catch some sun at The Haven’s empty sun-deck while the ship docked in the three remaining ports. Keeping track to see if we’d come down with symptoms. Staying in the suite as much as possible. At no point did NCL reach out to tell us officially that we had been exposed to the virus.

This took any pleasure that was left out of the picture. Our cruise went from something that was a celebration of our son’s birthday and the new year – to a time spent in fear of having caught a disease that had killed millions.

Upon disembarkation day, and in the car back to Los Angeles, symptoms started to show. We went straight home, and then to a testing center. Indeed, the whole family was testing positive. After a month-long struggle with severe Covid-headaches for my son, I reached out to NCL to ask for compensation for the fact that we had half of our cruise ruined by the fear that the crew member had infected us, and also due to the serious after-effects it had on my son. However, NCL declined to fully compensate us for the ruined cruise. And while none of us felt excited to go back to “the bloat-boat”, that felt like the final insult.