A stir fried cauliflower loaded with the intoxicating flavor of fresh curry leaves.
By Prathima Rao 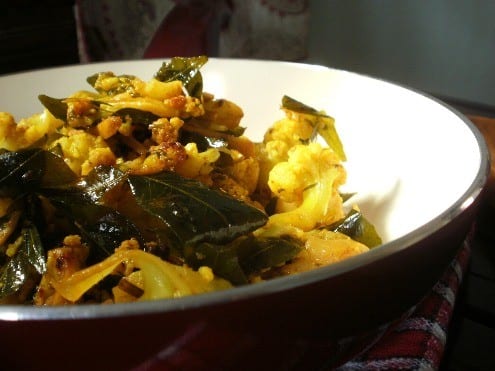 The sizzle and smell of coconut oil or clarified butter as it is being seasoned with quintessential South Indian spices – mustard seeds, fenugreek seeds or the urad dal (split gram gram) are a common comforting sound in all South Indian homes. These spices or dals along with asafoetida or cumin seeds or dry red chillies are some of the most basic ingredients that go into a South Indian tadka for flavoring traditional recipes.

A tadka or bagaar  is the process  tempering where whole spices are added to hot oil or ghee and fried briefly, not more than a minute but just enough to flavor the oil with the aroma of the spices.

A tadka may be of two ‘types’. It may added at the final stage of preparing a dish, where a small pan is used to prepare the tadka. As the  seeds & spices start to splutter and dance about in the pan, it is poured into the hot dish and immediately covered with a lid and set aside for a minute or two so as not to lose its flavors. This kind of finishing tadka is usually followed in case of dals, sambhar.

Tempering can even be made at the initial stage, where spices are added to hot oil and then followed by the remaining ingredients. Popular indian curries call for tadka at the beginning. And then there are dishes that demand tempering at the beginning and at the end too!! Imagine the explosion of flavors of that can take place in such dishes!

At whichever point it is added to a recipe, even if both tadkas call for similar ingredients, the taste and flavor both lend to the dish are way different to each other!

Tempering process is also called chaunk in Bengali or oggarne in Kannada or tarka in Hindi and so on. While most of traditional Indian recipes call for a tarka, the spices used vary. North Indian recipes may need cumin seeds, cinnamon, cloves or cardamom or fennel seeds, bay leaves, onion seeds and so on added to hot mustard or vegetable oil or even butter or ghee.

A common ingredient in the South Indian version of a tarka, besides the popular South Indian spices is the curry leaf. It is one plant you will find in many homes in Southern India. They have a nice aromatic flavor and also packed with numerous medicinal properties. They can be used as a remedy for indigestion, good for hair growth, improves eyesight to name a few. All possible ways to cook and enjoy its taste and benefits have been explored – added whole to curries or dals or ground to a paste for some dishes or sauteed and powdered with few spices to make dry chutney. This dry chutney is served as accompaniment to dosas (lentil pancakes) or idlis (steamed idli cakes) or other south indian breakfast dishes. 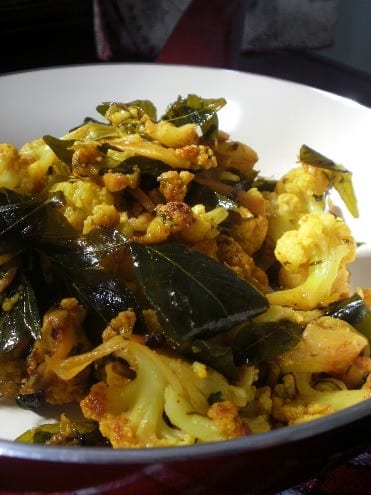 Onto the recipe now, where the flavor of the curry leaves is dominant and hence simply hearty & tasty! Be generous in adding this wonder herb. And now coming to the question why the dish is called 95..this was actually a recipe my mom came across in the newspaper back in year 1995 and that was how it was named by the chef. Of course this is not any authentic or traditional recipe but just reminds me of South Indian cuisine because of the liberal use of the curry leaves.

Here a tarka is required at the beginning. And there is no substitute for the fresh curry leaves. A little effort taken to procure this fresh herb from any indian grocers is worth it! 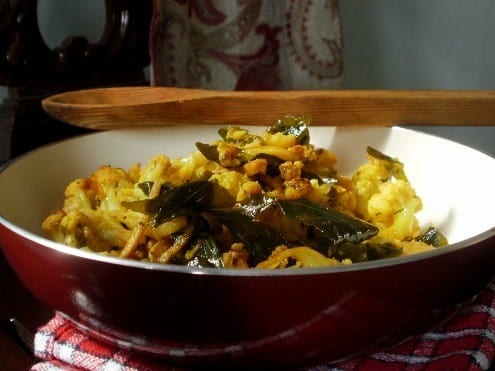 Print
Prep Time
20 mins
Cook Time
20 mins
Total Time
40 mins
A stir fried cauliflower loaded with the intoxicating flavor of fresh curry leaves. The curry leaves turn nice and crisp once the dish is ready and you can`t help but relish and munch on these herbs too!
Author: Prathima Rao
Recipe Type: Main, Appetiser
Serves: 4
Ingredients
Instructions
Notes
You could remove and discard the seeds from the green chillies and then add the chillies to the pan so as to get its flavor without being overly spicy. Do not cover the pan for more than 5 mins to retain the freshness and crispiness of the vegetable. Garam masala is the ever popular blend of spices added to most North Indian dishes. It is readily available in all indian supermarkets or some even make it at home!
2.1.7