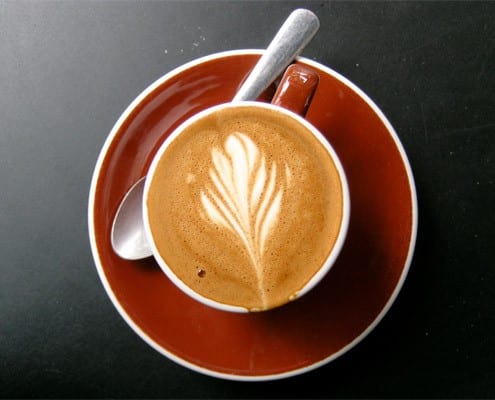 For those looking for a no-fuss espresso machine, can their be quality?
By Bill Walsh

Many coffee lovers either own or covet their own home espresso operation. To have stellar shots and scintillating lattes in the comfort of one’s living quarters is almost as good as having your own personal butler-barista (kind of like Kato in the recent Green Hornet film).

Yet many folks who strongly love espresso seem to go without an espresso machine simply because to get a quality espresso machine (like a La Marzocco or Rancilio), a micrometrical-adjustable burr grinder and the other necessary components (tamper, steel milk jug, etc) not only costs a handsome cent, but pulling quality shots takes practice and passion, calling for time and energy. Some folks just don’t want to or cannot make such an investment.

But if you’re willing to compromise on quality, the good news is that the obstacles of cost, time and complexity go right out the door. Appliance empires have churned out thousands of no-skill-needed, super automatic espresso machines, allowing the average coffee drinker access to mediocre – palatable espresso, cappuccinos and the like at the push of a button.

This all brings the obvious question: can a super automatic machine (one that grinds, tamps, pulls the shots, steams the milk and cleans itself without human aid) concoct decent espresso and cappuccinos? To try to address this query, the folks at Philips Saeco and at Ultimo Coffee in Philadelphia agreed to allow me to compare and contrast a high-end super automatic machine (Saeco’s Syntia) next to Ultimo’s high-end commercial La Marzocco.

Heading over one brisk night to Ultimo coffee, joined by owner Aaron Ultimo, we set up the super automatic on a free bar top and began the experiment. We used the same water, milk and beans (Counter Culture‘s Toscano) to keep the variables low. 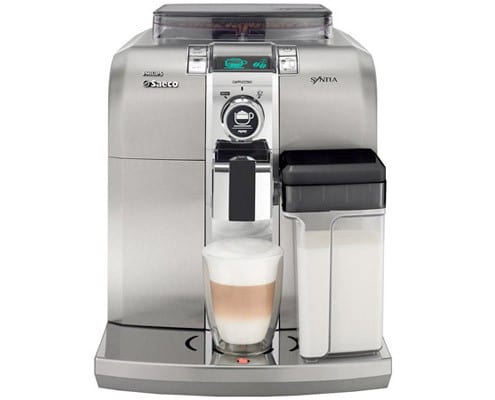 As a higher priced super automatic, the Syntia machine boasts being certified by Italian coffee tasters as being able to produce an authentic espresso and cappuccino (sadly, I can’t say that this means much as I’ve had horrible espresso from such “certifications”). The Syntia is also truly super automatic, as one button grinds the beans and pulls the shot for you; similarly if you want a cappuccino, you hit a different button and it grinds, pulls the shot and steams the milk too.

Keeping the espresso function on the “short pull” setting, the shots were of a 3-4 ounce volume (a little high for “short”) with an even, light brown crema. The flavor was reasonable, as it held all of the prominent flavors of the Toscano espresso blend but it fell flat after that, really lacking the subtler nuances of a good espresso. The body was dry and the drink overall proved lackluster. Adjusting the grind wasn’t really too effective in changing the outcome, as the shots remained similar as we made the grind finer (to accommodate for the initial high volume). Overall, the espresso proved fair, with the flavors none too bitter and of a mediocre level.

Testing the cappuccino, the machine steamed the milk first and then dropped the shots in, creating an odd vampire bite in the milk. Once again, the flavors were fair, with the milk and espresso producing a dry beverage with a muted sweetness and bit of cardboard. The machine produced little in the way of microfoam and overall, the integration of the espresso and milk was haphazard at best. Still, I have to admit that the beverage was still drinkable and on par with what I’ve had at some 2+ or 3+ cafes.

Moving onto Ultimo’s La Marzocco, one of Ultimo’s baristas pulled some glorious shots that embodied a complexity of flavors including bittersweet chocolate. The shots were balanced and smooth, with a brown crema and velvety body. Ultimo’s cappuccino also proved stellar, with a creamy texture of sweet milk complimented with notes of cocoa and honey. The latte art also showed strong integration of the elements.

Clearly Ultimo’s professional baristas made better drinks, yet in comparing their product to the Syntia’s, I have to submit that a non-coffee geek would probably be satisfied with this super automatic. Using top notch milk, fresh well-roasted coffee beans and filtered water, the espresso and cappuccinos were decent enough in taste to make the average coffee drinker happy (especially if one plans to laden said drinks with lots of sugar and syrup).

If you’re looking for a simple (though expensive) espresso machine to make you a fair cappuccino, you would be justified in getting something akin to Saeco’s Syntia. But if you have hopes of duplicating a drink you’ve had at a shop like Ultimo Coffee, try out CoffeeGeek’s guide here on what equipment to buy.

To see more pictures, see the post on the Pure Coffee Blog.