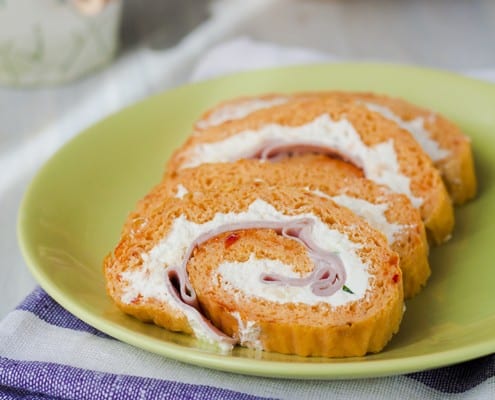 Ajvar is the classic – and utterly delicious – red pepper relish from the Balkans.
By Tamara Novacoviç

Various rolls have always been associated with religious, mythological and gastronomic preservation. That is probably why so many rolls, both sweet and savory, have always been a traditional part of food in Croatia and this part of Europe.

When we say “roll” or “roulade“, I guess the first association is sweet cinnamon rolls and such, as well as sponge roulade filled with chocolate or whipped cream and fruit. However, there are interesting savory rolls, both delicious and decorative, that can be the best appetizer. Such is this roll. And what about this pepper relish?

Pepper relish in Croatia is called ajvar. It’s originally made of roasted (today sometimes cooked) red peppers. The so-called rog peppers are most often used – they’re horn-shaped with thick flesh. Usually some eggplants are added, as well as garlic, sometimes chili. Ajvar became popular throughout former Yugoslavia after World War II. Depending on added chili, it can be sweet, piquant or very hot. It is usually consumed as bread spread, salad or a side dish.

Ajvar is traditionally made in mid-autumn and preserved in jars. The preparation is not that simple, as it takes long time and manual labor (stirring, peeling of the roasted peppers and eggplants). Once the roasted vegetables are peeled, they’re usually ground in a mill and then stewed for several hours in huge pots. Salt is also added, as well as sunflower oil in order to enhance further preservation (and sometimes a bit of vinegar). Hot ajvar is poured into hot sterilized glass jars and sealed.

I wanted to explain the notion of ajvar because it is used in this roll. Only 3 tbsp of it give it a nice orange color. You can play with natural colors and add cooked chopped spinach for green color, or poppy seed for dotted effect. These are all vivacious and natural, spring colors.

If you don’t have ajvar available, use any other similar pepper relish / spread.

Print
This roll is the perfect spring appetiser.
Author: Tamara Novacovic
Recipe Type: Appetiser
Ingredients
For the sponge
For the filling
Instructions
2.2.6

The Perfect Wines for an Italian-Inspired Easter Brunch or Dinner