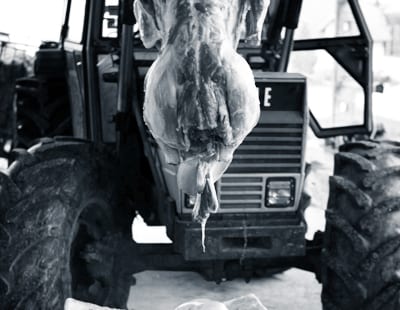 In the tiny alpine village in the mountains of Slovenia where my wife grew up, a pig dies. Beside its lifeless body stands a man dressed in Socialist era blue overalls, grinning ear to ear, a pair of glistening knives in his over-sized hands.  We’ll call him Egon.

With the speed and precision of an Olympic fencer, Egon breaks the pig down into its component parts, with not a hoof going to waste.  He uses exactly and only five ingredients in his renowned sausages: natural casings, salt, garlic, white wine, and pork.  No preservatives, no junk, no filler.  These sausages could not possibly be fresher, made while the oink still echoes.  The entirety of this ex-pig will be joyously consumed.

It’s not pretty, but it is part of rich evolutionary and cultural tradition.

There are scientific arguments one might make for why it is ethical for humans to eat meat. It is harder to find a moral argument.  We are biologically programmed to be omnivorous. Chimpanzees, our nearest relative in the animal world (chimps and humans are 95-98.5% genetically identical), are also omnivores: they eat mostly flora, but sometimes fauna, as well. So did our cave-dwelling ancestors. We should take a note from this data and focus meals on vegetables. Meat should become a side dish, rather than today’s enormous steak with a small pile of creamed spinach bringing up the rear. We do eat more meat today than is either healthy or sustainable.

We are obliged to consume meat in a state of at least subconscious denial. Because of our ability to empathize, our compassion, no one wants to think of where our meat comes from. While we don’t mind killing ants, meat comes from theoretically cute and thoughtful-looking creatures. It is a fair argument that anyone who wants to eat meat should have to participate, at least once, in the butchering of what they intend to consume.

But one overlooked aspect of the great meat debate is the social one. Our hunter-gatherer ancestors would have rejoiced in the meat provided by a hunting party which, at great peril, returned with a kill that might keep an entire community in protein for a week. Farming has removed the danger from killing animals, but the communal spirit, the joy, anticipation, and bridging of differences brought about by group consumption is still a part of our world, and a shining one.

Meat is delicious and it brings people together. When Egon butchers one of the pigs on his farm, folks from all over come to purchase meat: smoked ham hocks, smoked sausages, roasting sausages, blood sausages, loins, cutlets, and the leftover scraps which are made into meatballs. The waste-free kill becomes the center-point of a community gathering, just as it did for the hairy-knuckled proto-Egon many millennia ago. The village doesn’t rejoice in quite the same way when the annual broccoli harvest rolls around.

Egon and I have nothing in common. When I try to engage him in conversation, it usually results in my desire to pummel him over the head with one of his sausages. Egon thinks that homosexuals should not be allowed to adopt children, and that vegetarians cannot possibly perform sports or manual labor. There is only ignorance behind his ideas, no malice, objectionable though they might sound. Nevertheless, I still want to whomp him with a sausage.

When we do get together, I try to avoid potentially infuriating topics and focus on the meat-based gathering, a fellowship of pork. One thing everyone seems to agree on: Egon makes the best damn sausage south of the Alps.