PARTNER POST — TrySwedish Thursdays is a culinary collaboration between TrySwedish, West Sweden, Gothenburg and Västerbottensost cheese. Discover the edible delights of the land.
Learn the traditions of the late-summer Swedish celebrations, how to have your own, and where to join in when visiting West Sweden. Join us at NORTH Festival for an authentic crayfish party in NYC. 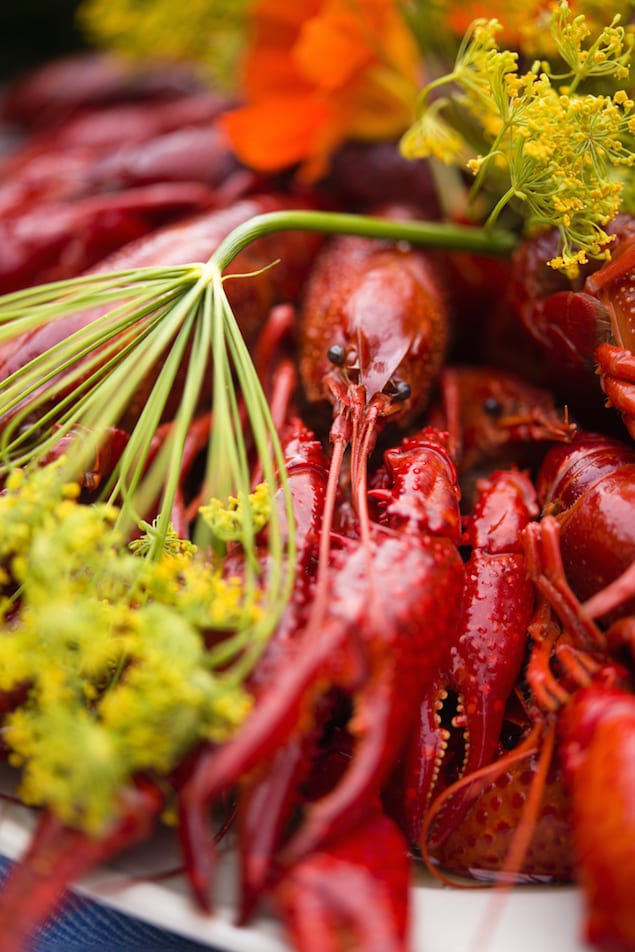 As a last hurrah to summer, Swedes acknowledge the season with a festive crayfish party. Silly songs, snaps, and Chinese paper lanterns and hat decorations are a crucial part of the celebration to say goodbye to the sunny time of year. This may be the one Swedish holiday where meatballs are not the focus of a meal, although they are still present. Instead, the crayfish proudly takes center stage for a fun change.

Ask a few locals if they will be serving salt or freshwater crustaceans at their gathering and you are sure to receive some passionate response. Swedes enjoy engaging in lively debates about the two sources and each have their own strong preference. If you celebrate the holiday in West Sweden, in view of the beautiful coast, you are likely to be enjoying the main dish from the sea. A crayfish from the are often referred to as langoustines or ocean crayfish and have a pinker hue, while freshwater fish are more red. Despite their ardent preference, most hosts of a crayfish party do not catch their own offerings. However, if you would like to get in on the action you may join fishermen in the Fjallbacka Archipelago to see how its done, and for a tasty bite of the catch, too.

Crayfish have been caught and enjoyed by the people of Sweden since around the 1600’s. However, it was once an upperclass-exclusive food that was served warm in puddings and stews. Crayfish eventually become prevalent with the common people and were boiled, then served cool. By the 1800’s, all people of Sweden were attending crayfish parties to celebrate the end of summer and what once was the opening of fishing season for the crustacean. While the catching restrictions are no longer in place today, the festivities are still observed at the same time of the year.

If you are visiting the area near the end of August, you will notice that most gatherings are private parties at homes with friends and family. However, if you take a trip to Weather Islands and visit Väderöarnas Värdhus you can take part even as a visitor.

In the US, you may have difficulty finding true Swedish crayfish at your local seafood stores, but southern crawfish would surely get you in a similar spirit until you are able to visit the region. Once you have secured the fish, now you need decorations. Most parties, along with the Chinese paper hats, have bibs for each of their guests to protect agains drips and juices.

Be sure to boil the crayfish before your guests arrive so they have time to cool down. Each Swede has their own seasonings, but most boil the crayfish will dill, sugar, salt, and maybe even a beer. Lay paper or a cloth down on your table and serve crayfish straight from the surface with plenty of fresh dill. Few utensils are needed as most of the foods served at a crayfish party require only your hands, however, be sure to have a claw cracker on hand as backup.

A traditional Swedish crayfish party will serve other items besides the seafood. You will most likely find pickled herring, potatoes, sausages, crispbread, cheeses, and Västerbottensost cheese pie nibbled in between crayfish. Did you know that the average Swede eats one pound of crayfish each year? Of course, a majority of that consumptions occurs during a crayfish party, so be sure to have great libations to wash it all down with. In between each fish and the fun singing, guests will often drink “snaps” or shots of spirits such as aquavit that go well with the other flavors on the table. Cold beer is also a common pairing with the festivities. Be sure to line up the crayfish shells after you empty them! A true Swede would keep count of how many they eat, slurping their way to the finish.

Travel to the region for a true taste of what it means to say goodbye to summer with a bang!

Head over to the NORTH Festival site for more info on the crayfish party hosted in NYC.