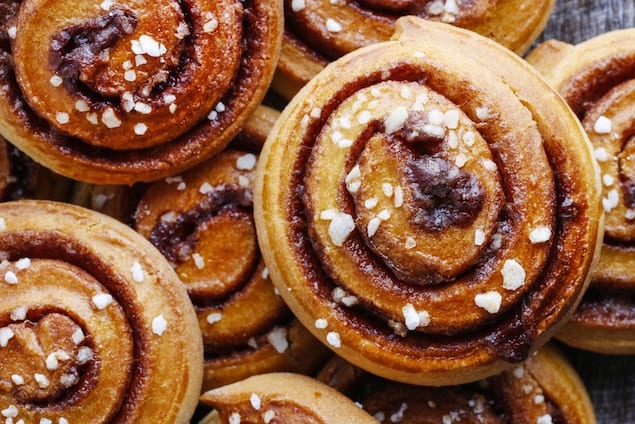 PARTNER POST — TrySwedish Thursdays is a culinary collaboration between TrySwedish, West Sweden, and Gothenburg. Discover the edible delights of the land.
Swedish cinnamon buns or Kanelbullar are a part of the delicious afternoon fika, or coffee break, tradition. Located in Gothenburg, Café Husaren makes one of Sweden’s largest pastries. Try making your own with the favorite recipe.

Shutterstock: Agnes Kantaruk
Located in the historic and trendy Haga neighborhood of Gothenburg, Café Husaren bakes the beloved kanelbullar pastry. Swedes love their cinnamon buns, often speckled with cardamom too, so much that October 4th has been dedicated to Swedish Cinnamon Bun Day.

After the first World War, Swedes could once again afford luxury baking ingredients like wheat flour, sugar, cinnamon and other spices. In celebration of these items being available again, the Swedish cinnamon bun was born. Before that point, cinnamon had only been used in savory dishes in Swedish cuisine, but its recent availability prompted bakers to bring it into pastries, too.

For the owners and bakers at Café Husaren, the Swedish cinnamon bun is more than just a pastry. One whiff of a warm spiced bun and they immediately think of cozy connections over coffee, afternoon breaks with friends and uspophostinated, pure pleasures. There are a handful of cafés lining the streets of the quiet Haga neighborhood and from morning to the afternoon they are filled with patrons coming and going or staying for a relaxed lunch or coffee break complete with a cinnamon bun.

Now if you are thinking of the classic American cinnamon bun baked side-by-side in a pan and slather in a too-sweet thick glaze, throw that image from your mind. The Swedish cinnamon bun is baked separately into a rustic swirl, spiced with cinnamon and cardamom, and finished with pearl sugar for a perfect subtle sweetness and a beautiful a crunch, too.

Café Husaren has made the news with their larger than average pastries. Generally their buns are baked to be 30-35 cm (11-13.7 inches) in diameter and weighs at least 431 grams (just under one pound). But the largest one they have ever made is called the Super Hagabulle and was over 50 cm (19.5 inches) in diameter and weighed more than 1 kg (2 pounds). Besides making a deliciously large treat, Café Husaren also prides itself on making a bun that is totally vegan and the best part is you can’t even tell.

The Foolproof Guide to Roasting Lamb

When you travel to Gothenburg, be sure to mark each afternoon with a traditional fika and Swedish cinnamon bun. On October 4th, if you are too far to travel to the country for the official celebration, try the recipe below. Café Husaren suggests enjoying a bun with a hot, black, Swedish drip-coffee, bryggkaffe. Children tend to enjoy the buns with a glass or raspberry juice and while you can have a kanelbullar at anytime, it is of course best during an afternoon coffee break.

Find out more about delicious foods and restaurants at www.goteborg.com and www.westsweden.com.