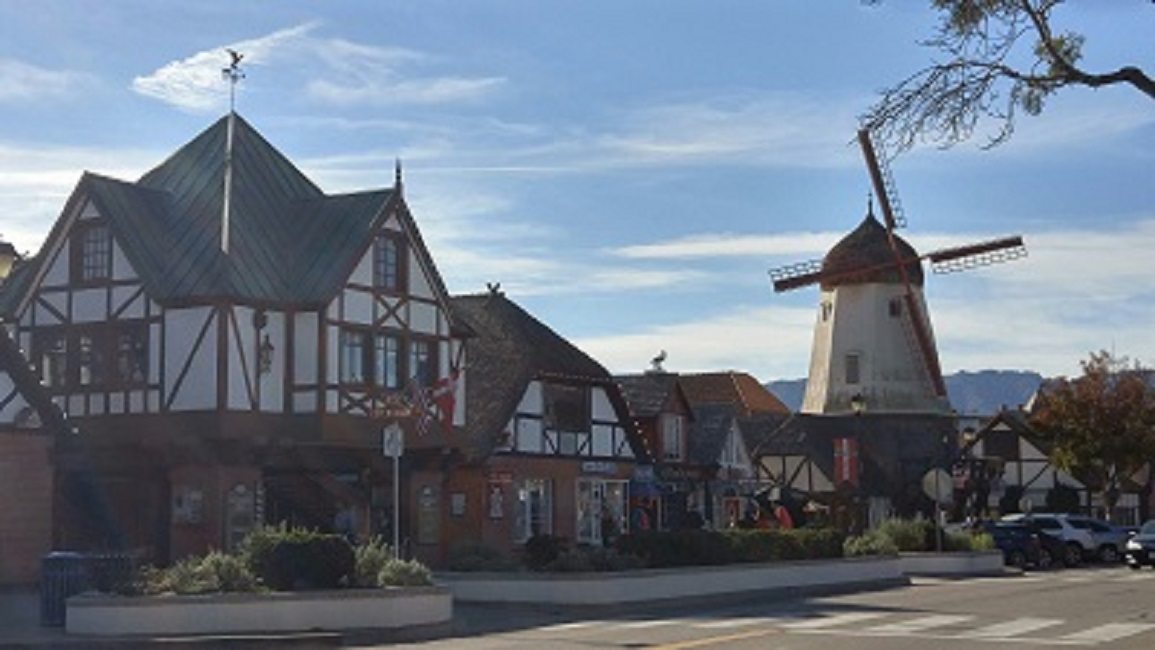 A visit to Solvang, known as “Little Denmark”, is like a visit to another world, complete with international edible delights.

Aebleskivers, round puffy pancakes made in the Danish like town of Solvang, California, is the food you think of when visiting this town in the Santa Ynez Valley. They are such a treat that those of us who visited Solvang in years past, bought a heavy duty cast iron aebleskiver pan and planned to make them at home.

Solvang, also known as the cute “Little Denmark” has generational Danish and Solvang descendants living in this central coast town 2 hours north of Los Angeles. They are serious about aebleskivers and their Danish heritage.  Jeff Paaske, a proud Danish-American and owner of Solvang Restaurant, keeps traditions alive for his mother country of Denmark.  During the Danish Days celebration weekend, his restaurant will serve over 3000 aebleskivers topped with raspberry jam and powdered sugar.  Jeff’s extra-large aebleskiver pan makes 50 at a time over a gas flame.  He showed me how he moves his wrist at just the right angle to turn the puffs of dough into golf ball sized round pancakes.  Traveling periodically to Denmark is important to him to keep up the cultural bond between both countries.  During his recent visit, he was inducted into the prestigious Christian lV Guild.

Solvang is proud of him and of course, the aebleskivers.

I must admit I was skeptical when I heard the dining scene had new and modern venues, after all, the Main Street has looked the same for 50 years.  A quick walk past fairytale style buildings with windmills and thatched roofs and I arrived at First and Oak restaurant.  Who would have thought that a former British chef in Gordon Ramsey’s 3 star Michelin restaurant would be running this kitchen in Solvang?  Chef Steven Snook uses local farms for his fine dining menu and the breast of duck cooked in a sous vide with local peaches was incredibly tender and flavorful.  It was picture time when the sautéed scallops and corn puree were presented wedged between watercress essence. Chef likes living in the slower pace town which also has much to offer his cooking needs with wineries, fresh produce and ranches.   Chef Snook changes the menu according the seasons and pairs wine from the restaurant owner’s vineyard, Coquelicot Estate. Judging from the number of diners who filled the restaurant and the outside patio, they have a winning combination.

The buzz around town and on social media was about the celebrity chef who opened her own restaurant near the center of town. Chef Pink (Crystal DeLongpre), and her wife and business partner, Courtney, combined their talents and opened Bacon and Brine earlier this year.  They had a successful small sandwich shop and the demand for the way they do business meant opening a full-service restaurant.  It hasn’t all been a cake walk, taking over an existing building had its challenges. You wouldn’t know that now from the line of people waiting for a table. Chef has an extensive culinary background and appeared on Top Chef and Food Network’s Cutthroat Kitchen. She knows how to put ingredients together and can be seen working away in the open kitchen.  She only serves organic food and all meats and produce come within a 5-mile radius. Pigs and cattle are raised to her specifications and she makes thick slabs of bacon as her namesake. Courtney loves the process of fermentation and brining is her forte.  She brought me a refreshing glass of lemon verbena kombucha tea with my Bahn Mi smoked chicken sandwich. Convinced the bacon couldn’t be missed, a thick slab of chef’s bacon lay artfully on top of a caramel donut, sprinkled with sea salt.

Solvang has distinguished itself with traditional and modern dining and the varieties are sure to please everyone.

The Solvang Restaurant – Searching for Aebelskivers