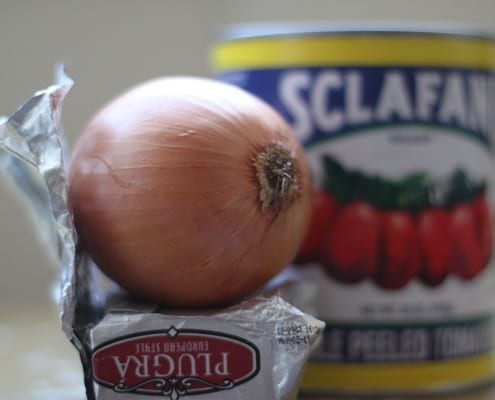 This is one of my first memories. And one of my favorites. I have no idea how old I was. Maybe three? It stuck with me. I totally abandon all culinary principles in favor of cotton candy every time. There is a picture of this moment somewhere. Even if it were lost, it’s been permanently burned into my cortex.

As a kid, my lunches were always a point of spectacle. Last night’s chicken Marengo, with all its mushrooms, olives and white wine, perfuming an area generally occupied by the smell of rectangles of cafeteria pizza. Another day might be California rolls, or a stir-fry of bok choy, water chestnuts, baby corn and bamboo shoots. Things my classmates cringed at and I craved. Other parents used to ask mine, “how do you get her to eat these things?” I never recall their answer.

I remember drinking V8. Putting it in the freezer to get it extra cold. Then sitting, eyes closed, trying to identify the flavor of each vegetable at a time. Could I taste the watercress? I thought I could. I was probably seven or eight. There is a good chance that I’d never had watercress before. But I was pretty sure I could taste it somewhere there between the celery and the beets.

What makes some of us this way? Is it chemical? I was lucky enough to be fed by two parents who were both amazing cooks in their own right: my father was the grill-master and wise sage of grilled cheese, my mother kept notebooks full of her own recipes and taught me the ways of butter and deglazing with wine every damned time you can. I thank them at every single opportunity for teaching me to like good food, but some of the blame for my food obsession has to be placed on me. Otherwise, there would be no explanation for you brave souls who suffered countless tuna noodle casseroles and frozen bags of cubed mixed vegetables, emerging from the other side as beautiful, ravenous phoenixes with such good taste.

Guys, I know you’re out there. How did we do this to ourselves?

Sometimes, my memories of food from childhood are so vivid, I worry that I’ve maybe stopped creating food memories. In case you feel the same way, I’d like to share something with you that will snap you right out of it. I will now recall, until the end of time, the evening during my twenty-seventh year in which I stood, leaning over a pan of tomato sauce, face so close I was at serious risk for tomato and butter burns, inhaling obsessively. A LOT of people have talked about this tomato sauce. In fact, I am pretty late to the party. But, if someone as obsessive as I am could miss it, maybe you have too. And that just wouldn’t be fair, you beautiful, ravenous phoenixes.

Tomato Sauce with Onion and Butter

Print
Prep Time
5 mins
Cook Time
50 mins
Total Time
55 mins
A brief tirade from someone quite invested in this recipe: Do not muck about with this the first time. The second time, throw in some garlic, a bit of oregano, whatever you want. I certainly did. Be aware, however, that you will always return to this starting point. And no matter what you do to it, it will never taste better than the way Marcella told you to make it. Eat this simply with some spaghetti or papardelle, maybe a BIT of Parmesan over the top.
Author: Adapted from Essentials of Classic Italian Cooking, by Marcella Hazan
Recipe Type: Main
Ingredients
Instructions
2.2.1