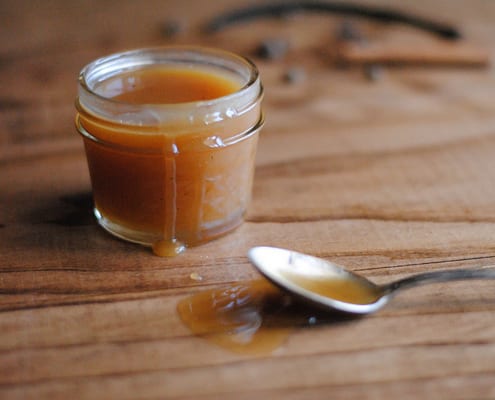 Natasha is a love-and-matriarch-taught maker of sweet things. She is…

A few weekends ago at the farmer’s market, I got some Mercier Orchards apple cider. Ever since then, I’ve been drinking apple cider like a mad woman! I’ve decided that warm, spiced apple cider poured over bourbon is my official go-to holiday drink. So naturally, I began thinking about spiced cider and dessert. Something warm and smooth and comforting. This caramel is it.

Natasha is a love-and-matriarch-taught maker of sweet things. She is passionate about using local and seasonal ingredients and making simple, satisfying sweets that make even the least of sweet tooths swoon. Although she is a native Texan, she currently resides in Atlanta where she is finishing up law school and documenting her sweet adventures through photos, recipes, and stories on her blog at tartletsweets.blogspot.com.