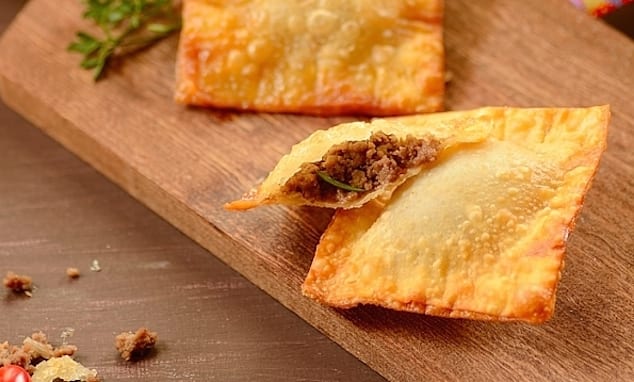 These small fried beef empanadas are quick and delicious. They can be served as an appetizer or an afternoon snack. Use wonton wrappers as a delicious shortcut.
By Denise Browning

Thinking of something quick to make for your next get-together or party? These fried beef empanadas (pastel de carne) will both save you time and make your guests quite happy. The secret for preparing them quickly is to use wonton wraps instead of making the dough from scratch.

In my home country of Brazil, traditional fried beef empanadas can have either a half-moon shape (often used for the smaller sized empanadas) or an envelope shape (typical for the jumbo size). They are one of the most popular pastries to serve as party appetizers, as well as for quick snacks. Beef empanadas are available from street vendors (where they are frequently served with chilled cane sugar), at cafés, bakeries, and specialty shops known as pastelarias (empanada shops).

Although the origin of empanadas (pastéis) is controversial, there is strong evidence that points to Asia, meaning that empanadas likely developed from Chinese eggrolls and Japanese gyozas. Both were adapted to whatever ingredients were available in Brazil during World War II, and then sold by Japanese immigrants and their descendants, beginning in the state of São Paulo. They were such a hit that they quickly started being marketed both at empanadas shops (pastelarias) and at street markets all over the country.

Print
Prep Time
10 mins
Cook Time
20 mins
Total Time
30 mins
These small fried beef empanadas are quick and delicious. They can be served as an appetizer or an afternoon snack. Use wonton wrappers as a delicious shortcut.
Author: Denise Browning
Recipe Type: Appetizer
Cuisine: Brazilian
Serves: 25
Ingredients
Instructions
Notes
Store fried beef empanadas (leftovers) in a clean airtight container in the refrigerator for up to 24 hours. Heat in the oven before serving.
3.2.1275