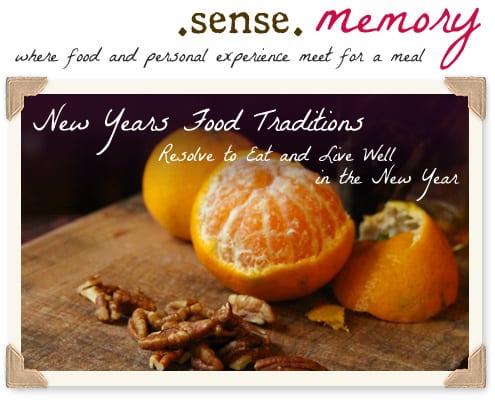 Historically, the approach of the new year has been celebrated by many cultures as a time of prosperity and hope, which was directly represented by what was on the plate.
By Denise Sakaki

Long before Santa Claus came to town, I started seeing resolutions being planned to cut back, eat less, and approach 2014 with a litany of newfangled, fad-inspired regiments to put the Cabbage Soup and Grapefruit Diet to shame. There’s nothing wrong with a healthy amount of moderation when it comes to meals, but when did New Year’s become such a feast of joyless promises?

Historically, the approach of the new year has been celebrated by many cultures as a time of prosperity and hope, which was directly represented by what was on the plate. The first meal of the year, for many cultures around the world, foreshadows one’s feast or famine in the upcoming months, so of all the meals to make a big deal out of, this would be it. The American Southern combination of black eyed peas and stewed greens on New Year’s has connections to the Civil War, when so many resources were laid bare, and simple animal feed like greens and black-eyed peas were what remained. Humble, but nutrient-rich, these basic ingredients kept people alive in a time of war. These ingredients date further back to European roots, where greens like cabbage were considered lucky because they resembled currency. Germany and Sweden often serve sauerkraut as a new year’s dinner side dish. Black-eyed peas, also called rubiya, are a common item served for the Jewish new year (albeit at a different time of the year), Rosh Hashanah, as a symbol of abundance and fruitfulness. Similarly, lentils symbolize prosperity in Italy, which is why lentil soups are often a popular first meal of the year.

A food’s shape is also significant – round, circular edibles are celebrated in many cultures as a representation of a year being completed. In Greece, they coincide the celebration of New Year’s and St. Basil’s Day with a round, sugar-dusted cake, a vasilopita, where a coin or small trinket is baked inside. Similar to the European and Louisiana “King Cake,” the person who receives the slice with the treasure will see a prosperous year ahead and hopefully no broken teeth. Noodles are the preferred food-shape for shogatsu (New Year’s) in Japan. Eating toshikoshi buckwheat soba noodles is said to send out the old year, and slurping the notably long noodles without chewing or breaking the strand rewards the eater with both luck and longevity. Just be careful – there’s no good luck in choking on your food.

The importance of what food looks like translates to color – gold-hued food means money in your pocket. The Peruvian dish, papas a la huanchaina, is a potato dish tinted with turmeric or a saffron-like spice called tadillo, giving it a bright yellow color. Chinese New Year’s meals often include egg pancakes, spring rolls and tangerines, all having that warm, golden glow. It may not be doubloons, but a colorful meal is a bright way to start the year

Unlike the oppressive modern-day diets, abundance in New Year’s feasts was a way to welcome a positive year ahead. It can be all about the numbers – in Portugal and Spain, it’s customary to eat exactly twelve grapes or raisins at the stroke of midnight to bring luck for each upcoming month. Fish, preferably a whole one, represents prosperity for Chinese feasts. Pork is a popular main course from Asia to Europe, as its fat and meat quantity represented richness, and from a practical standpoint, if there was a healthy-sized pig to slaughter, it ensured food for the rest of the winter. In Europe, wild boars were traditionally hunted and on the first day of the year; the animal itself was viewed as a positive symbol because pigs use their snout to root in the ground in a forward motion. Always moving ahead, never looking back, if a pig can keep its resolve, why shouldn’t we?

There are also foods to avoid before greeting a new year – and it’s not because they’re not lowfat or gluten-free. Turkey, goose or any winged bird is considered a poor choice; despite its delicious roasted state, it may fly off with one’s prosperous future. Chickens are bad luck because they scratch about for their food, and you don’t want to eat an animal that literally has to scratch out a living. You would think something luxurious as lobster or crab would be an ideal feast, but they were also tagged as omens of bad luck because they can crawl backwards, and the new year was all about pushing forward.

If this list of Old World traditions and superstitions doesn’t have you wondering what the heck to serve on New Year’s Eve that won’t ruin 2014, just remember the overall theme of how you start a year is how that year will progress. Don’t stress over every calorie consumed; savor quality ingredients, greet each meal with appreciation and joy. And just for good measure, when eating that celebratory New Year’s meal, leave a bite or two on the plate, to ensure prosperity ahead.