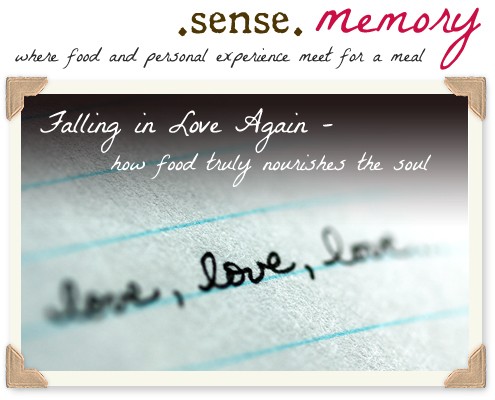 Can you be an avid gourmand even if you suffer from ulcerative colitis disease? A moving story about falling back in love with food.
By Denise Sakaki

Imagine your body turning against you and the food you eat, the internal system you rely upon to process and absorb nutrients, suddenly becoming a hostile environment to every delicious morsel. It’s called ulcerative colitis, an auto-immune disease that affects as many as a million people in the U.S. It causes an inflammation in the colon, preventing the digestion and absorption of food, with the body painfully rejecting it, and in severe cases, can lead towards organ failure or a heart attack due to lack of fluids and nutrients in the body. Imagine your most cherished dish, a beloved food, becoming a total stranger to you, and a slow starvation leaving you as frail as a bird.

Michelle* doesn’t have to imagine this, because she’s been living with colitis as a constant companion in her life for nearly fifteen years. But she’s never let it stop her – she’s an avid gourmand, traveling across the country to feed her hungry heart’s desire, writing the blog Radish and Rose. She has an enviable collection of cookbooks, adores Thomas Keller, and no matter what anyone says, she will always adore cupcakes. She is a true bon vivant, celebrating feasts with friends, and the way food can transform a life. That is, until the feast became famine. Her body turned against the food on the plate, leaving an already petite 5’3” frame twenty-six pounds lighter, a literal whisper of a girl. Suffering a severe inflammation that nearly caused a fatal shutdown, Michelle spent weeks in a hospital, completely bedridden, her meals given intravenously. Doctors were able to stabilize her, eventually starting her on a gradual reintroduction to solid foods again, but the experience was understandably traumatic, even for someone who has lived with colitis for years. Where in previous situations, she had always been able to control the flareups with dietary changes like eating bland foods until her system could recover, but this time was different. She knows the way she looks at food will never be the same, and yet her epicurean spirit remains undaunted.

“When [the colitis] happens, it gets out of control easily,” Michelle says of the attacks. It’s been a few weeks since she’s been released from the hospital. She’s home now, reengaging with daily life and a paced regiment of gaining the weight back through several small meals a day. Despite her appetite finally returning, familiar cravings for creature comforts like macaroni and cheese or hamburgers have to wait. Michelle explains how one loses a considerable percentage of muscle mass while in the hospital; despite being on medical supervision, the body literally starts to cannibalize itself. She’s spent days on a strict diet of plain rice and fish, simply prepared, as a baseline to reacquaint her system to solid food, processing the crucial vitamins and minerals to rebuild that muscle. She keeps a diary of individual things she’s introducing to her body, ticking off new items daily in a notebook. The ingredients we take for granted, like roasted potatoes or raw lettuce, are like milestones her body is eagerly hurtling across with every passing day. She remains in good spirits, a sparkle has returned to her eyes, as she explains how she looks forward to every day, as it means she can eat something new. “I’m so happy to be alive,” she says with genuine joy and matter-of-factness. Where some would see this paced approach towards eating as an agonizing path for a food enthusiast, Michelle sees it as something of a newly discovered romance. Every item she lists in her food journal is like a love letter for the tastes and flavors she is getting to know all over again. After being sensory-deprived of solid food, it’s like her palate hit the “restart” button, and she’s like a child tasting things for the first time, but with the appreciation of an adult who can savor every morsel.

Michelle’s first bite of spaghetti and meatballs “tasted like a dream,” she raves. The noodles were overcooked for easy digestion and the sauce wasn’t overly flavored, but it felt like a symphony.

Roasted carrots are like candy. While sugars of any kind are still difficult to digest, she allows herself small bites of a lemon cake, which to her, is a touch of the divine. It’s still no paradise; she’s on several medications, some foods are painfully rejected. The gradual building up of strength is frustrating, as the act of walking up the stairs of her home is tiring. It can sometimes feel as though the world is passing her by, but she credits the food blogging community as a source of inspiration, drawing hope from it. She knows her recovery is eventual, and even if she may have to give some things up, she has an unyielding positive attitude. “My mind has such a strong memory of food,” she says when she looks at her fellow bloggers’ posts of enviably rich meals. “I don’t care that I can’t eat that. I can enjoy the memory of having had that food at some point, and it’s enough.”

It’s been an educational process; Michelle has learned to substitute things her body takes issue with processing, like dairy or wheat. She’s been looking to vegan recipes for substitutions, pleased to discover how easily coconut milk can replace the richness of cream. It’s created a new enthusiasm for foods she may not have eaten regularly, like Asian cuisine. “I love mochi,” she said with a smile. And it’s heightened an awareness that everyone considers but may not always take seriously, the issue of processed foods. Michelle’s return to grocery shopping felt like a rude awakening. “I couldn’t believe how much processed stuff was there,” she lamented. It’s not like the chemical-laden powdered doughnuts appeared out of nowhere, but it becomes more abundantly clear how prevalent the pre-fab dietary habits of the average American is when your health depends on avoiding it. She’s renewed her habit of buying organic when possible, and being diligent about fresh, simple foods.

The love of food is simply an expression for a love of life. Michelle has a second diary, a personal one with short, private notes for herself. She started it when she came home from the hospital. Every bite that renews her relationship with food brings back cherished memories, and a reminder to live with gratitude, in every moment. She speaks of a renewed sense of clarity, an ability to look past the haze of present-day concerns and write down things like, “Make better choices for happiness.” And in between promises to learn new recipes and discover healthy alternatives, the simplest lesson emerges from this complex relationship between food and life, written clearly for her future moving forward: “love, love, love.”