Called torta al testo, torta meaning pizza or bread, and testo referring to the heavy iron pan the bread is cooked on, this is one of Umbria’s favorite food traditions.
By Kathy Bechtel 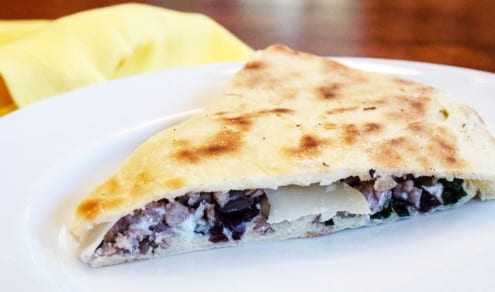 You can find torta al testo stuffed with just about every combination of vegetables, cheeses and meat you can imagine. You’ll find it on tables and in restaurants throughout Umbria, but hiding under different names – we’ll see it as pizza al testo, near Gubbio it is crescia, on the Tuscan border it is ciaccia, further south near Terni, pizza sotto il fuoco or pizza sotto lu fucu (under the fire).

This ancient dish is believed to date back to the Etruscans, early settlers of Umbria and Tuscany, predating the Romans. Then unleavened, this was a mixture of flour and water, and cooked over hot coals on a disc made of river pebbles and clay, very similar to a flour tortilla in Central American.

Today, a testo can be purchased at an Umbrian market. A modern testo is made from iron or iron and aluminum, and is meant to be used on a stovetop. A cast iron pan would be a great substitute, and I use a non-stick skillet which works just fine too. Most modern recipes for torta al testo include some sort of leavening agent, such as yeast. It makes a great antipasto, stuffed with Umbrian favorites like prosciutto, pecorino, and drizzled with Umbria’s famed olive oil.

During summer months, Umbrians love their food festivals, or sagra. These are food festivals that celebrate a single favorite dish, or local product. You will find torta al testo at many a sagra, but the towns of Sant’Egidio and Montefranco love their torta so much that they devote an entire sagra to it!

The torta al testo can be served as a flatbread to accompany a meal, or stuffed with just about anything you can think of. My recipe below uses a fairly common stuffing of cheese, sausage and sautéed greens. The bread itself does not keep well, so should be used as soon as possible after cooking. You can make the dough a day in advance, and let it rise in the refrigerator – this long rise would even improve the flavor. Have the fillings ready to go, and you can whip up your stuffed torta al testo in about 15 minutes.