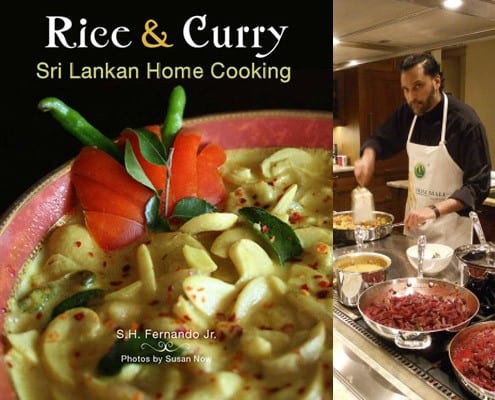 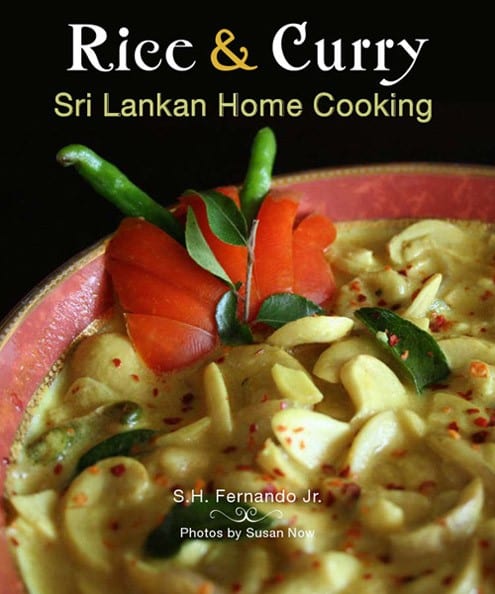 S.H. Fernando Jr. is an established music journalist, filmmaker, musician, and has recently added cookbook author to his resume. He is the author of “Rice & Curry: Sri Lankan Home Cooking”, a phenomenal cookbook published by Hippocrene Books this past November. So great is his cookbook that it made The New York Time’s “Notable Cookbooks of 2011” list. He is here to tell us all about his beautiful cookbook and about the hidden secret that is Sri Lankan cuisine. Please help me welcome S.H. Fernando Jr.

1. Describe your cookbook to us, what should readers expect?

Rice & Curry is really an introduction to Sri Lankan cuisine, which I believe is one of the last undiscovered culinary gems of our time–as well as one of the best. Sri Lankan food is folk-cuisine, which is meant to be prepared at home, so it is perfect for all those home cooks out there who are looking to expand their repertoire and try out some truly incredible flavors. Most recipes are supplemented by tantalizing photos, so you know how they are supposed to turn out. There is also a lot of information about Sri Lankan culture, as well as a whole chapter on travelling to Sri Lanka.

2. Why did you, an established music journalist, filmmaker, and musician, completely change course to write a cookbook?

Food has always been a ‘hobby’ of mine, and I have always been interested in cooking. As opportunities within the music industry and the media have drastically diminished within the last few years, making it more difficult to earn a living, I decided to shift my focus to food. In addition to the cookbook, I maintain a blog called “Rice & Curry” , and I also market my own spice blends, called Skiz’s Original (available at Foodoro.com). I also have a cooking show on Youtube called “Pan Asian,” which focuses on dishes across Asia. So I have dived headfirst into my passion for food.

3. Why did you choose the name Rice & Curry: Sri Lankan Home Cooking for your cookbook?

“Rice & Curry” is actually the term that Sri Lankans use to describe their food, which encompasses the staple food, rice, as well as a broad gamut of curries both meat and vegetable. The meal is supplemented by various salads, chutneys and pickles. Since this food is not haute cuisine, but meant to be cooked at home and enjoyed everyday, it is most certainly home cooking.

4. You went back to your parent’s homeland of Sri Lanka to research and write your cookbook. Can you tell us why you choose to go and what the experience was like?

I have been going back to Sri Lanka since I was young as that is where most of my large extended family lives. When I had a break in my schedule, and nothing really keeping me in the U.S., I decided to go back for a full year and finally work on this cookbook, which has long been a dream of mine. Because my interests are so varied, I always seem to be splitting time between so many different projects, but this time I decided to commit to this one project and focus all of my energies there. The experience was really incredible because I love food, and to be able to dedicate a whole year to just studying cooking was really special. I learned how to shop for produce at all the outdoor markets; I learned about all the individual spices that Sri Lankans use; and I ate at so many different places—from the street to restaurants to peoples’ homes. The best food is always found in peoples’ homes, and Sri Lankans are so hospitable that if you like a particular dish they served, they are more than happy to give you their recipe. That’s also how I initially compiled a lot of the recipes in this book—from friends and family—though I tweaked them myself also making them more accessible to the western palate (which really means using less chili). But all the recipes in the book are truly authentic and are considered standards of Sri Lankan cuisine.

5. What was the best part about writing your cookbook?

The best part about writing the cookbook was, of course, trying out the recipes, perfecting them, and sampling the food! 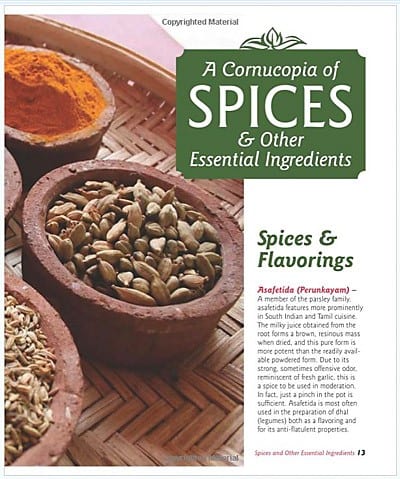 6. There are so many great recipes in the book. Which one is your favorite or the one you cook most often?

I think probably my favorite dish is Fish Ambul Thiyal (Sour fish curry) because it’s a typical Sri Lankan dish that you can get no where else. It’s made with a special ingredient called goraka, which is basically a dried, sour fruit, which gives this dish its signature tart taste. This special ingredient may be ordered from Sri Lankan food websites, which I include in the back of the book.

7. When did your passion for cooking begin?

My passion for cooking began as a young child, watching my mother in the kitchen. She used to entertain a lot, and as I got older, I would help her prepare big Sri Lankan meals.

8. What do you enjoy most about cooking?

For me, as a creative person, cooking is such a creative activity, and also very meditative and relaxing. I cook everyday, and I’m happy (and lucky) to be able to do it. As I also like to travel and experience different cultures, cooking allows me to travel without leaving the kitchen, and I am really interested in all kinds of food.

9. If you could only use three words to describe Sri Lankan cuisine what would they be?

10. What recipe, or dish, would you recommend to someone trying Sri Lankan cuisine for the first time?

Chicken curry, definitely. For one, it was the first curry I learned to make, so its easy, and it’s also a mainstay of Sri Lankan cuisine. 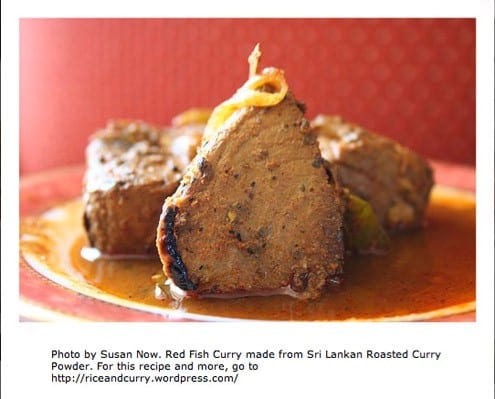 11. Why do you think Sri Lankan cuisine has not received the attention it so deserves?

First of all, Sri Lanka is such a tiny country, and being in the shadow of India, everyone assumes that Sri Lankan food tastes exactly like Indian food. This is both true and false. Sri Lankan food uses some of the same elements of South Indian cooking, but being an island, the culture, food, and history of Sri Lanka is unique. Sri Lankan food evolved to be its own thing altogether in the same way that, for example, Vietnamese food was influenced by Chinese food, but stands on its own as (I believe) one of the great cuisines of the world.

12. Being that India is Sri Lanka’s Northern neighbor, I’m sure most people would assume that the cuisines of both countries are quite similar. What are the differences that set Sri Lankan cuisine apart from Indian?

While curries are popular in both India and Sri Lanka, we use coconut milk and coconut oil in our cooking as opposed to dairy products like yogurt and ghee. Sri Lankan curry powder is also very complex, using a combination of some 13 different spices and ingredients, which are dry-roasted before being ground and combined together. In Sri Lanka, we also use whole spices such as cinnamon and fresh curry leaves in practically every dish, which gives our food its signature taste. Finally, Sri Lankan food is very heavy on the chilies—both in powdered form (dried red chillies) as well as fresh whole green chilies.

13. You served as a guide for Anthony Bourdain, on an episode of his No Reservations Travel Channel show, when he traveled to Sri Lanka. You must have been so proud to talk about and show the true flavors of Sri Lankan cuisine to the world. What was the experience like for you? And do you think the program gave a good insight into the local flavors?

Since No Reservations is one of the few TV shows I try not to miss, it was very exciting to appear on the show and serve as Bourdain’s culinary guide for Sri Lanka. He’s as funny in real life as he comes across on screen, and even though he was sick for most of the taping of the show, he was a good sport. As a producer myself, it was really interesting to have an inside look at how the show is put together, and I really like the fact that everything is very natural and unrehearsed. We never re-shot a scene twice, and I was never coached about what to say or do by the producer or director. I also have got to say that the two cameraman (yes, that’s all they use) were very professional and got great coverage and B-roll for every scene. Aside from a few segments—like portraying the Galle face Hotel as the hotel from the horror movie, The Shining, as well as an overly long segment on the Dutch Burghers of Sri Lanka (who represent a very small community)–everything was pretty accurate. But also keep in mind that you cannot really capture such a diverse a place as Sri Lanka in an hour-long program. For some reason the segment we shot at a Tamil restaurant and a Muslim Street food stand were omitted. I really wanted to have both of these included because both Tamils and Muslims are an important part of the fabric of Sri Lankan society, and their culinary contributions as well comprise an important part of Sri Lankan food. But on the whole, I believe the program gave people a good “taste” of our cuisine.

14. You took Anthony Bourdain and his crew to meet Leela, who’s story is told in the book, during the taping of the show. What was Leela’s reaction to not only being made famous by your cookbook, but now appearing on a hugely popular tv show?

Leela, who was my aunt’s cook for 42 years, is like a member of the family, whom I have known all of my life. You don’t know how many emails I have received from Sri Lankans or people traveling to Sri Lanka who want to eat at her house, as if it’s a restaurant. She is a very humble lady, and she was both thrilled and embarrassed to see herself on TV, but I’m not sure she realizes what an impact she made on those who have seen the show—including Tony Bourdain, who declared the meal at her house as his favorite one on the trip.

15. What’s next for you, do you have another cookbook in your future? If so will you continue with the Sri Lankan theme?

As you know, I have a variety of interests. Right now, I am working on a documentary film about Ethiopian music. I have gone to Ethiopia several times in the last year and I LOVE their food. They use a lot of the same spices as Sri Lankans do, but their food tastes completely different. I am also releasing a new album this year on my label, WordSound. But I will continue to blog and write about Sri Lankan food and all things spicy. And I would like to develop my Youtube cooking show, “Pan Asian,” into a real TV show, and incorporate a travel angle into it. As much as I like Andrew Zimmern (Bizarre Foods) and Bourdain, I think there is a lot of room for more programs about food and travel, but from a completely different perspective. 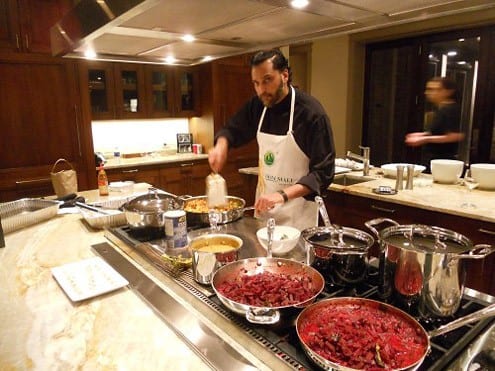 Get your copy of Rice & Curry  now 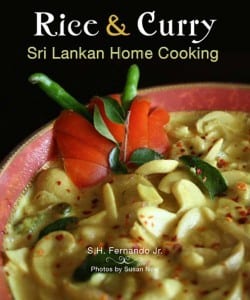