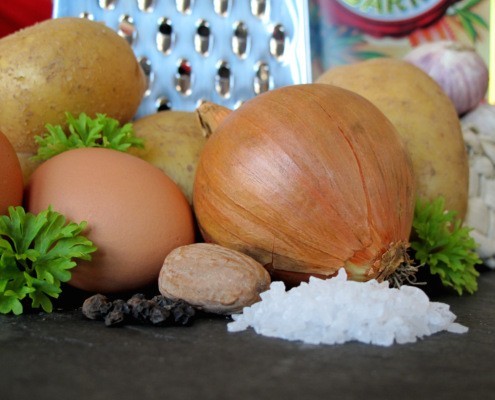 Steen Hanssen is back with more culinary wonders from Germany. This time, the Reibekuchen – German potato pancake.
Text And Photo By Steen Hanssen

Reibekuchen, also known as Kartoffelpuffer is a potato pancake dish that is hugely popular across Germany and very simple to prepare and cook. The dish is often associated with Christmas markets where it’s served with Apfelkompott (apple gravy)  a befitting heavy and nourishing bite, ideal for the cold winter season. Reibekuchen (literally translates into grated cake) is also a popular side dish in Bavaria where it’s eaten with Sauerkraut and sausages. In the Rhine region around the city of Cologne the term “Reibekuchentag” (potato pancake day) is still being used to describe the traditional meatless weekday of Friday. Unfortunately the potato pancake has also become quite popular as a fast food dish found in the prefabricated and frozen food sections of many a budget supermarket. This of course is an utter abomination especially considering how easy they are to make.

It’s well known that Germans love their potatoes, Pommes (large french fries) is an iconic side dish often accompanying the equally iconic curry-wurst or any other bratwurst, pork of beef cut. The “Kartoffel Klöße” of the Knödel family is another significant German potato dish alongside mashed and traditional boiled potato.

It was  Friedrich the Great, King of Prussia (1740-1772), who in response to the ever present fear of famine ordered his well organized Prussian bureaucracy to implement a comprehensive education and information campaign promoting systematic potato cultivation. The co-called “Kartoffelbefehl” (Potatoe Decree of 1756 ) stand as a testimony to Friedrich’s visionary transformation of Prussia into a modern state. The potato plant, brought over from Peru by the Spaniards in the mid 16th century had by the time of the Potato Decree already been in Europe for 200 years without being acknowledged for it nourishing potential and thus largely ignored. By late 1780ties Friedrich’s efforts to educate and persuade the deeply skeptical and mostly rural population of the benefits of the crop eventually paid off and the potato has since become a stable food in Germany.

To make traditional German Reibekuchen, you finely grate a kilo of starchy potatoes (if available I use the Bintje type) and one big white onion while draining away any excess liquid, through in a couple of beaten eggs, some spoons of potato flour (in case the texture is too moist), season with salt, pepper, nutmeg, garlic powder and finely chopped parsley. Form the dough into small 1 cm thick American sized pancakes and fry them in oil on both sides until golden brown and crisp. Do serve with apple gravy, perhaps some speck or sausage and definitely with a cold beer.

Is Grenache The Next Big Wine From California?