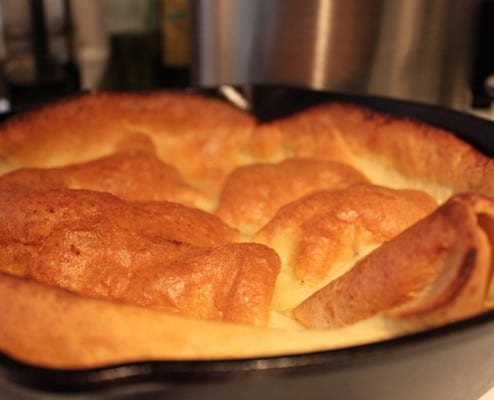 If a popover and a pancake had a baby, it would probably be Dutch.
By Rebecca Orchant

I have a love/hate relationship with pancakes. I love them for certain things: the occasional, buttery crunch they get on the outside when they’ve been cooked just right, the puffy air pockets that soak up syrup and the fact that they are one of the few foods you can eat in shapes. I hate them because they are almost always too sweet, too heavy and they are, let’s be honest for a minute, very rarely in shapes. Not to mention the fact that I am usually full after three bites and hungry again in thirty minutes. It is for all these reasons that a Dutch Baby is one of the best things to happen to my breakfast life in some time.

Nevermind the bizarre, morbid enjoyment I get out of proclaiming that “the baby is in the oven” (parents for whom I occasionally babysit, I will never do this, I promise). A Dutch Baby is a puffy, tender, crispy, buttery oven pancake that I can’t seem to stop making. It’s as if a popover and a pancake had a baby. And then you put that baby in the oven. (Seriously, that was the last one, I promise.)

Anyway, this delight has made many an appearance in our kitchen on lazy Sunday mornings because – did I mention this yet? – it is idiotically easy. After doing a bit of research, it seems that some people take theirs out of the oven long before I do, so that it’s still a bit custardy in the middle and they can throw fruit and other stuff in the middle. I, however, like this be a little crispier. The crunch is very satisfying next to some bacon (or… whatever you guys eat who don’t eat bacon) and a few soft scrambled eggs.

I like to use salted butter for this because it makes it – well- a little salty. I think it’s a nice contrast with the sweetness of good maple syrup. Enjoy and stay warm! 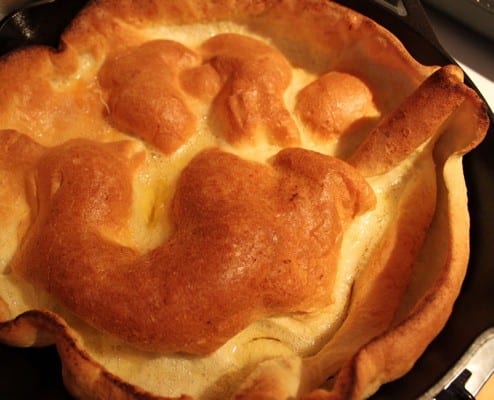 Print
Cook Time
35 mins
A Dutch Baby is a puffy, tender, crispy, buttery oven pancake that I can't seem to stop making. It's as if a popover and a pancake had a baby.
Author: Adapted from the Joy of Cooking
Recipe Type: Breakfast
Serves: 2 - 4
Ingredients
Instructions
2.1.7