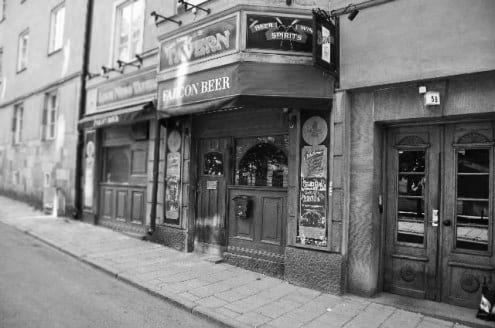 Beer geek Joakim Bergman talks about his favorite place to go for a brew in Stockholm. The classic Loch Ness Tavern.
By Joakim Bergman

In the heart of Södermalm, Stockholm, nestled between a douchebag-ridden college bar and a foul smelling afterwork joint lies a Mecca for beer geeks, micro brewery fanatics, craft beer connoisseurs, and just about anyone who’s sick and tired of the run-of-the-mill beer scene, and wants to suck down something a little bit more special. Here lies the Loch Ness Tavern, a small, discreet pub that’s jammed full of exciting beer from all the corners of the earth.

At first glance, when you enter the rugged door to gaze upon the incredibly tacky mosaic-art that litters the walls, it looks like any other English themed pub abound, but when you sit down to get a beer you immediately realize that there is something special about this place. From the way you instantly befriend the bartenders and their vast knowledge of beer, to the incredibly well-stocked refrigerators, you come to realize that is a place you want to come back to. Everyday.

With the everchanging stock, Loch Ness has an incredible variety of beers, not the largest, but definitely one of the best. I would recommend trying the Inveralmond Blackfriar, a smooth and rich Scottish Ale, the Sixpoint Bengali Tiger, a wonderful and hoppy IPA and the Great Divide Hercules Double IPA, a powerful and punchy IPA that almost knocks you over with taste. Or you can just let one of the genius bartenders behind the counter decide for you, always a foolproof plan.

If you’re ever in Stockholm, and you enjoy good beer, Loch Ness is a must-go.