Rendering duck fat and then braising these succulent duck legs takes time, but the final result is as satisfying as Thanksgiving dinner.
By Heather Schmitt-Gonzalez 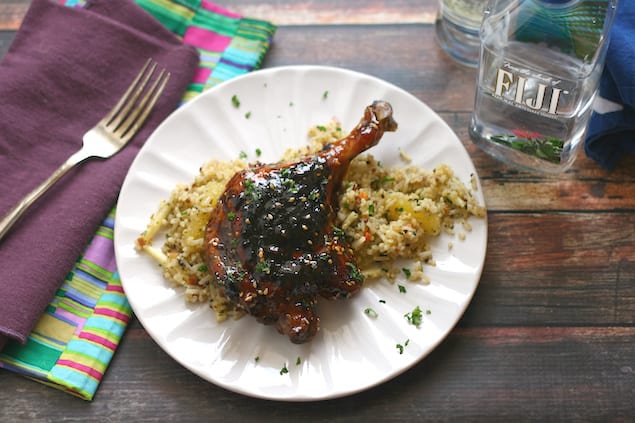 Recently I realized something, and it made me a bit wistful. I realized that I don’t take my time in the kitchen anymore. I mean, YES—I’m always in the kitchen. Always testing recipes. Always making dinner. Always moving a stack of cookbooks from the table to the floor. Always fretting over lack of counter space…lack of daylight…lack of clean dishes. Hurry, hurry, hurry. Spending my time instead of taking it.

Sixteen years ago, when I moved into my first real apartment…not a dorm room, not a house or apartment shared with college roommates…just me, I took my time in the kitchen. I was just coming into my own. I was learning cooking processes and techniques. I used to make lists, explore ingredients, and prepare meals that took time. Golden-skinned chicken that was roasted in the new stoneware dish I was so proud of. Chuck roasts so tender and beckoning that burning my fingertips just to get an early taste didn’t hurt a bit. Pink hams wrapped in a shiny glaze. Pork loins propped up by a bed of sturdy vegetables. You know, the type of food that envelops the entire house in a sense of calm.

And I did it just because I enjoyed it.

Honestly, it bummed me out a bit to think that I’ve devolved. I mean sure, life is more hectic than it was then. Life as an adult will do that to a person. But, I was the one who let that feeling get away. Fortunately I know how to get it back. Maybe not in the exact same way that I had it when I was 23—but in a way that makes sense for 39-year-old me.

Today’s fast-paced world can make it easy for anyone (or at least me) to forget that sometimes slower is better. I’m ready to take back some of my time in the kitchen. I’ll use it to tease my family with intoxicating smells from the oven. Scents that will have them waiting at the dinner table (that they set) 20 minutes early in anticipation of what’s to come. Starting with these braised duck legs. 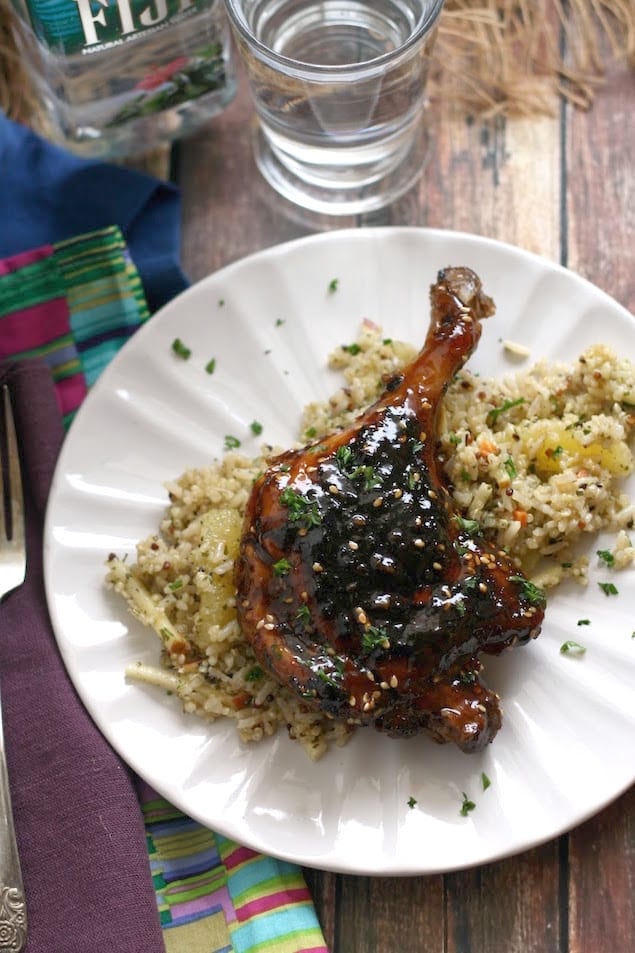 Now, they way they came about was kismet, really. With my recent realization still turning about in my head, I was offered the opportunity to work with FIJI Water on their Perfection Takes Time campaign, which just so happens to be “a celebration of everything delicious that takes time and care to prepare”. Coincidence? I think not. I’m definitely of the “everything happens for a reason” school.

What does focusing on delicious things that take time and care to prepare have to do with FIJI Water? More than you might guess. Now, let me begin by saying that if you’ve seen me with a disposable water bottle in my hand anytime in the last 15 or 16 years, it’s most likely been a FIJI bottle. Over time, my kids and husband have a separate times all asked me why I like FIJI the best. I’ve always told them that I think it tastes the best. It’s soft and sort of airy, and I don’t really know how else to describe it. My response usually elicits shrugs and “hmmm’s“. But I guarantee they were thinking about it the very next time they brought that bottle to their lips.

Back to the connection. In case you weren’t familiar, FIJI Water actually does come from Fiji. Their water process starts over 1,600 miles above the nearest continent with tropical rain that is purified by equatorial trade winds. The rain water falls into a pristine rain forest that’s surrounded by ancient, dormant volcanoes. As the water is slowly filtered by volcanic rock, it gathers minerals and electrolytes (which just so happen to be one of the reasons behind that softness I mentioned earlier). The water then collects in a natural artesian aquifer deep below the earth’s surface, protects it from outside elements, thus preserving it. Natural pressure pushes the water towards the surface, and right there at that source is where FIJI is bottled.

So, in true my true walking-contradiction form, I wanted to get started immediately. Hurry, hurry, hurry-up and slow down. So, where to begin; what was going to help me get that feeling back? Sixteen years ago, the thought of cooking duck never even crossed my mind. Like, ever. I wasn’t something that I grew up eating. But I could roast the heck out of a chicken or a turkey.

Along with all of the other things that have changed since then, duck is now a regular protein in our rotation. A peek into the fridge revealed four beautiful duck legs just begging to be rendered into slow cooked bliss. It does bear mention that while I have worked duck into our meal rotation, not everybody in my family is entirely sold on it yet. But each and every one of them is coming around, and it’s revelatory dishes like this one pulling them in one by one.

I made these on a weekday. I started early so I could get some good light to photograph by. The first step of the recipe is simply rendering that sought-after liquid gold from the duck legs—duck fat. It’s a slow and steady process that is good at reminding me why slower can be better. Four legs wearing their crispy skin like rock stars, and one small jar halfway full of liquid gold later, I was ready to start step two.

Step two increases the area of that comfort bubble that’s forming around the stove. The duck legs are nestled partially into an infused bath that enchants the entire house with it’s intoxicating smell over the next 90 minutes. On to step three, and a final searing of the skin that temporarily lost its crispness. Soon the succulent dark meat sports a sticky, burnished surface that crackles as you bite into it.

This realization, this process, this step back towards doing what enjoy in the kitchen again was amazing for so many reasons, but I’ll leave you with two of them:

Halfway through braising, my son walked into the kitchen and told me it smelled like Thanksgiving. Thanksgiving is the day I look forward to most all year because of the time I take in the kitchen. Relevant.

The duck leg that I set in front of my son came back with nothing more than bones on it. No skin. No meat. Just a content smile that I recognized as an echo of my own.

I needed this reminder.

If you want to see how I did it, you can find my Asian-inspired Braised Duck Legs recipe on the FIJI website.

Get this and many other Perfection Takes Time Recipes here or visit FIJI Water’s homepage.

This post is part of “Perfection Takes Time”, a partnership between Honest Cooking and FIJI Water.

0
Heather Schmitt-Gonzalez November 18, 2014
No Comments Yet