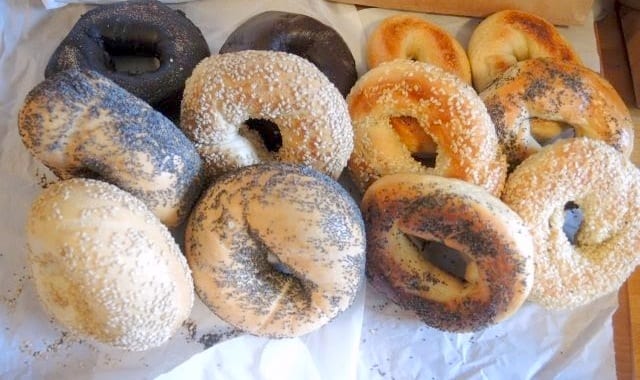 The quest for an authentic bagel can be more daunting than one may imagine. Mitch Weinstein explores the offerings of two new NYC bagel joints.
By Mitch Weinstein 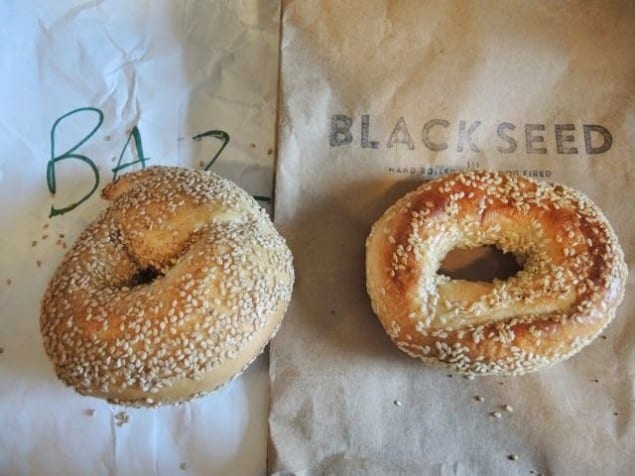 New York City has never been short on bagels. At least not since the early 1900s, when the International Bagel Bakers Local 338 was formed. Hundreds of bagel bakeries existed – my paternal great-grandfather was a bagel baker in the Bronx – as a matter of fact, he and my great-grandmother are buried in the Bronx Baker’s Mutual Aid Society plot at a cemetery in Springfield Gardens, Queens. (I also have a seltzer-man in my background, who sold seltzer off of a horse-drawn cart, but that’s another story). Of course, hundreds of bagel bakers and bakeries meant that there eventually were competing unions, non-union shops, strikes, strife, walkouts, lockouts and all that good stuff that comes along with a good product, the labor that it takes to make a good product…and ownership. Socialism aside (and Socialism is what was behind those early labor unions and why they were important), along came Harry Lender, who basically screwed the pooch, by first mass-producing bagels (with a machine he bought, but didn’t invent) and then by perfecting the slicing and freezing of his mass-produced bagel.

Eventually, all hell broke loose, bagels grew to ginormous size, and whoever first put a blueberry into a bagel should get 30 smacks with a stale bialy. When I moved to California (a long time ago), I was sad and missed bagels (and don’t get me started on pizza); that is, until I found a bagel place where they actually made bagels the old-fashioned way – hand-rolled, boiled and baked – in San Jo freakin’ se. I patronized them for years until I moved back to New York…the land of the giant bagel – the better to make a sandwich on – something a bagel was never meant to do, in my opinion; that’s what sliced bread, baguettes, rolls, lettuce leaves (please) and god-knows-what are all for – NOT BAGELS!

Fast forward to 2014 and within the last three months, two brand-new bagel places have opened (and I think there’s another on the way). Both claim to hand-roll, boil and then bake their bagels the old-fashioned way – even if one is Montreal style, and boils in honey water and bakes in a wood-fueled oven, and blah blah blah (I imagine old Harry is spinning in his grave about now). So, what better way to spend some time, with Significant Eater available as a taster, than by trying these two new offerings?

Let’s first take a look at the products side by side. Baz Bagel is on the left and Black Seed Bagel is pictured on the right side. 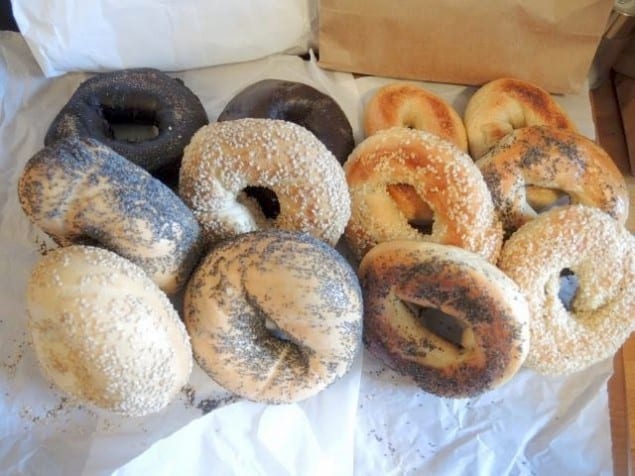 I detect some ginormity in the Baz bagel, as well as a rather generous hand with the toppings…

When put on a scale, the Baz bagel weighed anywhere from 2 – 3 ounces more than the Black Seed bagel – which was right in the ballpark of what a real bagel should weigh (just under 3 ounces). Here’s an interior view for perspective… 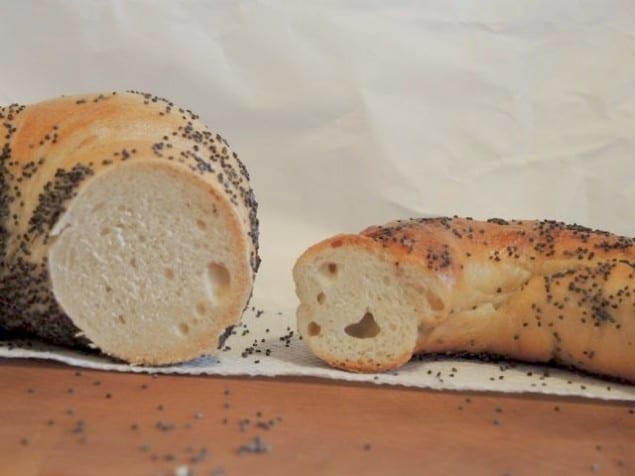 But really, it’s all about taste, isn’t it? And to be honest, to really taste-test a bagel, they should be eaten fresh – not the next day, not frozen, not whatever, but because of time constraints, I had to use the toaster. One half of each bagel was cream cheesed, and one half was buttered.

The far-from-final analysis gave us a clear-cut favorite. The density, the weight, the crustiness and the taste of the Black Seed bagel did it for us…though Sig Eater did note that they were a bit sweet from their honey-water dip. The wood-burning smoke is evident while the bagels are still in their bag, but not really so much in the finished product. And the Baz bagel, which had a nice flavor, just did not have enough crust-to-crumb ratio for us…it’s sandwich sized. Additionally, and don’t tell Sig Eater, I tasted the bagels before they were toasted – and liked Black Seed’s more that way as well.

Oh – one little thing – I still prefer the minis that Russ & Daughters sells – they’re specially made for R & D by the Bagel Hole in Park Slope, and they’re my favorite. You can’t make a sandwich on them, and why would you? Bagels were always meant to be enjoyed, a half at a time, with a schmear and a bit of lox.

So don’t worry, great-grandpa Harry. Someone will get it right one of these days.

The Grown Up Tuna Casserole