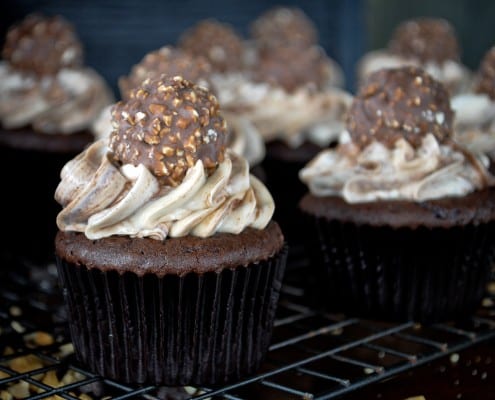 Nutella is one of those pantry items that never spends much time actually in my pantry.  I buy it, and I use it immediately.  And, if I don’t have a recipe rolling around in my head, I usually just eat it with a spoon.  Or on pound cake – or on graham crackers.  OK, if we’re being honest, (Honest Cooking, and all), I’m not above just using my finger.  I’m not proud.

I’m fairly certain that I’ve never had a jar of Nutella in my pantry for more than 24 hours.

The recipe for these cupcakes was born on a trip home from the grocery store one evening.  Before I even put my groceries away, I had these cupcakes baking away in the oven. This chocolate cake is rich, moist and just firm enough to stand up to the Nutella whipped cream filling. The silky-smooth Swiss meringue buttercream is swirled with ribbons of Nutella, and the combination of the cake, filling and frosting will have you swooning. You will actually fall in love with a cupcake.

Now, I have to make a trip to the grocery store.  I’m out of Nutella.  Enjoy!