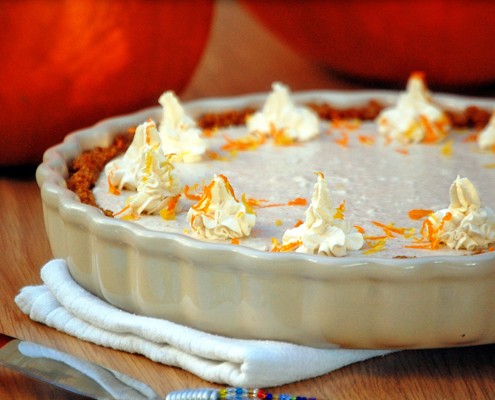 There are variants of Harvest Festival all around the world, and they all happen when the weather turns cold. In the US it’s called Thanksgiving. The last Thursday in November is the most important holiday in the American calendar. On the busiest travel weekend of the year in the US, everyone rushes home to sit down with family and enjoy a huge, gut-busting meal, usually followed by sprawling on the sofa in a tryptophan-trance watching a football game. The feast, which is traditionally epic in proportions, usually includes the traditional turkey with all the trimmings, and is invariably finished off with pumpkin pie. I think I may the only American who does not like pumpkin pie.

After I grew up and moved away from home, I often hosted what I called my ‘Thanksgiving for Orphans’, meaning a dinner for people whose families, like mine, were too far away for them to join. If anyone wanted pumpkin pie at these dinners, they were told to bring it themselves, because I’ve never made one and have no intention of doing so. 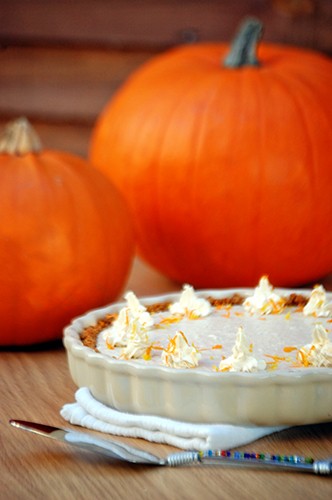 However, I may have mellowed with age, and I now feel somewhat obligated to offer up something that at least resembles pumpkin pie. So I came up my own version: no-bake pumpkin cheesecake. I make it with fresh pumpkin, delicately-spiced and not overly-sweetened, and a sharp and citrusy ginger biscuit crust. And it’s no-bake, so it’s dead easy to put together. Why not give it a try this year – at your Harvest Festival or Thanksgiving dinner, or even at Christmas?

Happy Holidays to all of you – whatever, whenever and however you celebrate! 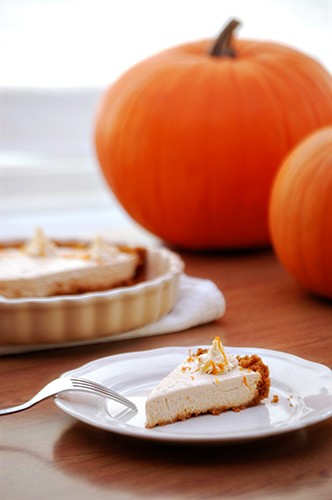 Print
Prep Time
30 mins
Total Time
30 mins
A dead simple, no-bake pumpkin cheesecake for Harvest Festivals and Thanksgiving alike.
Author: Ruby Moukli
Recipe Type: Dessert
Serves: 8
Ingredients
Instructions
Notes
1. I have been asked if this tastes much like pumpkin pie and the answer is yes. It tastes enough like the 'real' thing to satisfy traditionalists, but is different enough that I'm happy eating it. It's essentially a fresher, milder and zingier version of what you might be used to. 2. If you are lucky enough to live in a country where 'Speculaas' (or similar) biscuits are available, use those for the crust instead - amazing. If you can't find them, or ginger biscuits, blend up some gingerbread men, or else use graham crackers and add a pinch of powdered ginger and nutmeg.
2.1.7