In Mexico tortas are very popular meals. They can be served cold or hot, wet in a sauce, dry or grilled.
By Nancy Lopez-McHugh 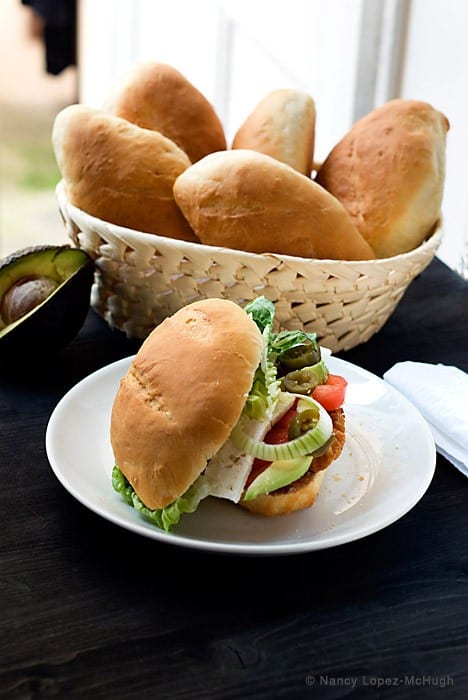 Torta is a Spanish word, which depending on the Spanish speaking country, can mean either cake, a flat bread, or sandwich. As you can see I’m talking about a sandwich. In Mexico tortas are very popular meals. They can be served cold or hot, wet in a sauce, dry or grilled. The ingredients are as simple as beans, ham and cheese, scrambled eggs, or heartier ingredients like the milanesa you see here. In Mexican Spanish milanesa means a breaded and fried cutlet. The cutlet can be either beef, pork or chicken.

The cutlet is much the same as an Autrian or German Schnitzel and a Czech smažený ?ízek. From our travels around central and Eastern Europe we’ve learned that breaded and fried cutlets are a popular meal around the region and beyond. In fact it was the Central and Eastern Europeans who introduced the cutlets to Latin America. Of course over time the cutlets evolved according to local cuisine and ingredients. In my family milanesa means a pork cutlet, but unlike the European versions our cutlets are served as a sandwich.

Print
Prep Time
30 mins
Cook Time
15 mins
Total Time
45 mins
In Mexico tortas are very popular meals. They can be served cold or hot, wet in a sauce, dry or grilled.
Author: Nancy Lopez-McHugh
Recipe Type: Main
Serves: 4
Ingredients
For Cutlets:
Toppings:
Bread:
Instructions
To prepare cutlets:
To assemble tortas:
Notes
*Chicken, or turkey or beef may be used instead of pork if desired. **If Mexican bread is not available any sandwich roll can be substituted.
2.2.6
The recipe is quite simple and can be adjusted according to taste or what you have in the refrigerator. The bread I used is Mexican bolillo bread, they are homemade but it is not my recipe. The bolillo recipe can be found here.
Previous Article