Not all veggie burgers are grill-able, but this one is ideal. Garbanzo beans are the base of this veggie burger, and are amped up in flavor from the Roasted Red Peppers and Caramelized Onions and a generous spoonful of the garlic. The combo flavor was awesome on a toasted bun and topped with feta cheese and more arugula.
By Taylor Kadlec 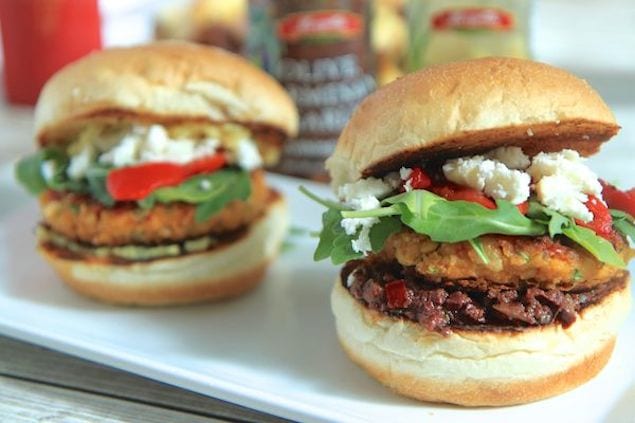 While I’m not a vegetarian (BACON!!) I can definitely appreciate a good veggie burger. In fact, when there’s an option between a regular beef burger and a veggie burger, I almost always go for the veggie. I like the heartiness and flavor from veggie burgers, and all of the different things they can be made one.

How-ev-er…one thing that really bums me out about veggie burgers is that most of the homemade recipes I’ve made are not exactly grill-able. It seems that the combination of beans, grains, and veggies just can’t mesh quite like good ‘ol ground beef and it ends up a hot mess on the grill. Luckily I have found a SOLUTION! So now you can grill out in your backyard or have a picnic in the park (with a grill nearby) and enjoy your new favorite veggie burger without throwing in curse words at the grill. Picnics are much more enjoyable without the swearing, y’know.

The trick is pre-cooking the veggie burgers on the stovetop. You don’t have to cook them completely, since you’ll be throwing them on the grill later, but you want to get that nice crust to form on the outside so you have no problem handling it on the grill. Then you can keep them in the refrigerator or even the freezer for when you are ready to throw them on the grill. Works like a charm, I’m telling ya!

Garbanzo beans are the base of this veggie burger, and are amped up in flavor from the Roasted Red Peppers and Caramelized Onions and a generous spoonful of the Savory Garlic Spread. I also threw in some breadcrumbs and an egg for binding it all together and a handful of arugula arugula for some greens. The combo flavor was awesome along with a nice lathering of the Olive Parmesan and Garlic Everything Spread on a toasted bun and topped with feta cheese and more arugula.

Print
Not all veggie burgers are grill-able, but this one is. Chickpeas are the base and amped in flavor from roasted peppers and caramelized onions.
Author: Taylor Kadlec
Recipe Type: Main
Cuisine: Mediterranean
Serves: 6
Ingredients
Instructions
3.2.1275