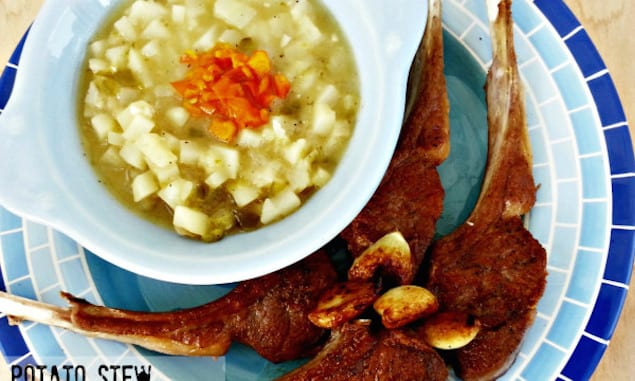 [adrotate banner=”44”] Try these lamb cutlets and a potato stew, a riff on patatas bravas and lamb lollipop commonly served in Salamanca with a beautiful glass of Rioja wine.
By Sarah Platanitis 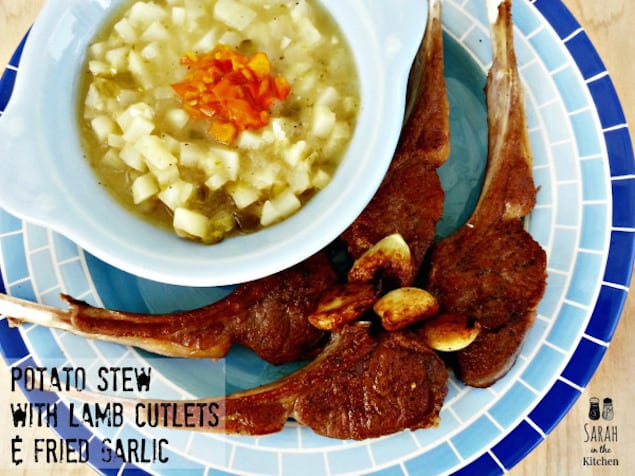 This month’s Good Eats is all about wine from the Rioja region of Spain. Rioja is a picturesque region in northern Spain and home to some of the most food-friendly wines in the world. It’s also the next-door neighbor to Castilla and León, the region where I lived for a while in my early 20s.

My two favorite things to do with friends were travel the countryside and eat. I still dream about the foods that we found and it has become a habit to pick-up a Rioja wine for everyday pours and special occasions because it pairs well with a wide array of culinary styles outside the Iberian peninsula.

Rioja wines are made with tempranillo grapes, a black grape that ripens early and known as the king of grapes. They give notes of plum, tobacco, leather and vanilla. The alcohol and acidity are deftly balanced and I’ve even seen sorbet made with sweeter Garnacha grape blends.

Riojas can be found in traditional ruby red, as a white (blanco) and a rose (rosado). Winemakers don’t rush their wines to market but rather release them from their cellars ready to drink. This means a perfect wine every time. Most bottles are priced around $15 and a fine vintage runs $30 or less.

In the dusty city of Salamanca, a place with ancient architecture that I once called home, tapas are called “pinchos” because of the toothpicks that pierce the savory snacks. The place we used to visit often would first serve us tiny bowls of piping hot potato stew, the abuelita’s healthier riff on patatas bravas, or fried potatoes, then we’d order up a big plate of lamb “lollipops” with whole fried garlic cloves and a Rioja red. Trust me, there’s no better way to sip away spend an evening.