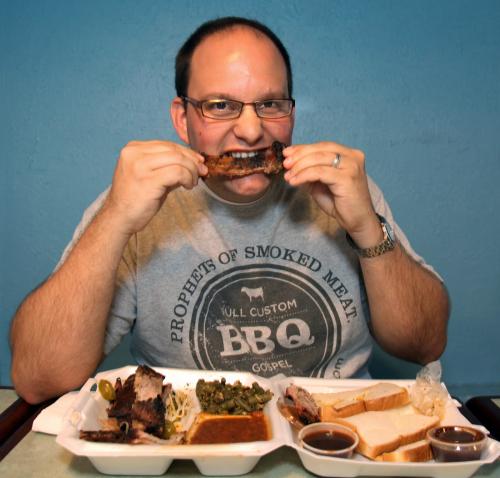 Daniel Vaughn may have the world’s best job. He is the only Barbecue Editor in the world, dedicating all of his working life to eating and writing about barbecue for Texas Monthly magazine.
By Noah Charney

A former architect from Ohio, Vaughn came to barbecue late in life, after he had moved to Dallas to practice architecture.  He has also just released his first book, also the first book published by celebrity chef, writer, and TV host Anthony Bourdain’s imprint of Ecco Books.  The Prophets of Smoked Meat follows Vaughn’s road trips through Texas, tasting barbecue at several hundred joints.  We spoke to Vaughn about his tastes, how to spot a good brisket, and the many ways to describe food as “smoky.”

I’m a huge barbecue fan, and you have what seems to me a dream job.  How did you get recruited by Texas Monthly to become the nation’s first and only Barbecue Editor, after the success of your personal barbecue blog?

I was recruited by them simply because they didn’t have enough content for the app they were developing.  That was almost two years ago, they were putting together a Texas BBQ app.  They had the 2008 Top Fifty reviews, but they wanted to put another respected opinion on the app that would include more than 50, around 350 reviews from my website.  When they approached me about the app, I never expected that, a few years later, I would be a full-time BBQ editor for them.

What prompted you to start the BBQ blog?

There was a big trip I took in 2006, down to central Texas to eat at a bunch of the greats, to see what the fuss was about, why people were writing about these places, why publications like Texas Monthly spent so much time and space writing about barbecue.  Most of the places getting ink were in central Texas.  We planned a three-day trip, hitting sixteen BBQ joints, the best of the best.  I came back changed forever.  I took audio notes about each one of those visits and just continued that when I came back to Dallas, visiting other places.  Started the blog to keep track of it for myself, the places I’d gone.  Began to put more and more time and effort into it, and I finally got to a point where other people were using it as a reference.

How different is Dallas BBQ from Central Texas BBQ?

No, we really don’t have one.  If you were to describe it, it’d be cafeteria style.  Everything with a ladle of salsa on top, and served with free soft serve ice cream after the meal.  We do have a couple of places, like Lockhart’s Smokehouse and Pecan Lodge, where you’re going to get Central Texas Style, well-smoked meats served by the pound.

Your book is on Texas BBQ.  What are some recommendations of yours for North Carolina, St Louis, Kansas City, or Memphis BBQ?

In North Carolina, Lexington Number One, Stainee’s (get the Outside Brown Sandwich), Skylight Inn in Ayben.  Those were all great.  For Kansas City, my favorite is LC’s and Oklahoma Joe’s.

What about KC classics like Gates or Arthur Bryant’s?

I wasn’t really a fan of Gates.  It seemed like a salt bomb, from the meats to the sauces, all too salty.  Didn’t do it for me.  Arthur Bryant’s was good.  I just liked the smoke and burnt ends and ribs better at LC’s.

How did your book become the first published by Anthony Bourdain’s imprint of Ecco Books?  Did you work directly with him?

That’s a long and involved story.  Basically it was a lot of good timing and dumb luck.  My agent in Dallas had been running his own agency, but then got recruited by Inkwell in New York to be their Dallas office.  Bourdain’s agent thus became my agent’s colleague.  That was just when Bourdain wanted to do this line of books, and I was finishing up my book proposal.  Those events came together and, before I knew it, I had a book deal.

Bourdain picked the book from the proposal.  He liked it, we got the deal worked out.  I met him again when we filmed “No Reservations” in Austin.  We met again in New York when I got the second version of the manuscript done.  I didn’t get line edits from him.  He basically said, “I got the proposal, I like what you did, keep going from there.”  He gave me some good pointers off the second version of the manuscript.  Line by line editing was done by Libby Edelson, who was brilliant throughout the whole process.

How did the experience of writing a book differ from writing your blog?

So fucking long!  Sorry, it sounds clichéd, or obvious, but it just took forever!  I sat down at night for almost all my writing, after work…  I took six weeks off from work (as an architect), to do the road trips.  When I came back, I had to get back to my 40 hour a week job, but I had a book to write and only a few months to do it.  I wrote it at night at a bar here in Dallas, the Dubliner.  They don’t kick you out til 2am, so I got plenty of good writing time in.  Especially when I sat down to start, I sat for the first few weeks and realized I’d only gotten through a chapter and a half.  Looking at how many words you write in a night, and how much more you have to go, it can seem daunting.  I just had to break it up, chapter by chapter, and crank it out.

How did you celebrate when you finished?

A pretty minimalist deal.  My wife went into the closet and grabbed a nice bottle of port and a six-pack she’d bought me, from the fridge.  I emailed off the final version to my editor at around midnight.  So my wife grabbed me some booze and we had a drink to celebrate.  As far as big-time celebrations, we haven’t done that.  We’ve got two kids, we’ll drop’em off with the in-laws soon and then we’ll fly up to New York to the book launch party, and then have some fun without the children.

Might there be future books about BBQ out of state, or elsewhere in the world?

I don’t really know where I want to take the next BBQ book.  I don’t think I’ve done all I can in Texas.  I went through NC for three days a few weeks back.  Folks asked if I was researching for the next book.  Three days in NC, to think I can say anything of meaning that hasn’t already been said, is a bit haughty.  There’s not much I could add to that conversation yet.  Rather than just talking about Texas BBQ joints and reviewing them, I’d like to look deeper into the people who are cooking it.

I liked that part of your book, where you profile some of the chefs.  That surprised me.

It was great getting to meet all those people on the road.  Aside from one or two, it wasn’t difficult to get the recipes out of them.  Wayne Miller just sat with me for an hour and talked beef ribs, while I took notes like crazy.  A lot of it came through emails after my visits, people would send me their recipes.  Only one person, Mondo Vera, he told me he was all-in for giving me the recipes, but I never could get him to call me back.  That was an important one to have in there, the last place to do South Texas barbacoa (smoking cow head in the ground, rather than steamed or braised).

Is it every tricky for you, when you sit down to write, to come up with new ways to describe the same basic foods?  I imagine a restaurant critic would find it easier, one night Chinese, the next night French, but you focus on the barbecue of one state.

Ha-ha!  Absolutely!  It’s a challenge—how many ways can you say “smoky?”  I’ve tried more and more to figure out similes that could actually help you figure out what I’m talking about.  There are only so many adjectives.  Broad food writers have trouble coming up with new ways, so it is tough for me.

How do you approach a plate, or butcher paper spread of BBQ.  I imagine it’s like an art critic approaching a painting, but could you take us through, step by step?

As I mention in the book, it starts when I order.  The best way to order BBQ is when you can watch the person cutting it.  You can learn a lot from how the meat reacts to the knife.  If it takes elbow grease to get the knife through the rib, maybe you don’t want six of them.  Maybe you want just one.  Once I get the meat, I pick up brisket first, as that’ll be the first to dry out on you.  You can learn a lot from touching it.  How easily does it come apart?  What moisture level is in it?  The tenderness is clear from pulling it apart.  Does it separate easily or is it resistant?  I call that “accordion brisket” and you don’t want that.  Not a good sign.  Then take a bite of that and move on to the rest of the plate.  But the brisket is the starting point.

You mentioned some of the clichés of what a joint should or shouldn’t have don’t necessarily apply.  But when you walk into a new place, do you have a sense right away as to whether it’ll be good or not?

When you first approach a place, it tells you a lot whether you can smell smoke in the parking lot or in the restaurant.  That’s obvious number one.  Even if you finish cooking at 8am and you open at 11, the smoke should still be hanging around.  If you can’t smell smoke, you’re gonna have problems…