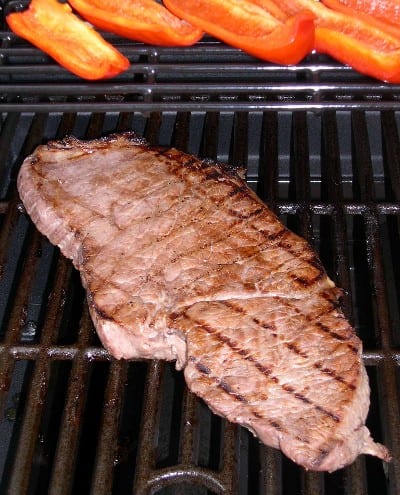 Mike Crimmins is the over caffeinated blogger behind Daily Shot…

While I’m trying to eat less red meat and more green vegetables, it’s about that time of year when all I can think about is grilling outside every evening. Of course, being a certified coffee addict, my favorite recipes include java in one way or another.

One of my favorites is caffeinated London Broil. The coffee flavor isn’t overwhelming, the flavors of the marinade came out stronger, but it’s hard to miss the hints of coffee. It adds a slightly woody, somewhat nutty flavor to make this recipe one hundred percent delicious.

Combine the marinade ingredients (everything except the steak, olive oil and salt) into a saucepan and cook slowly over medium heat until the brown sugar is dissolved and the marinade is completely mixed together.

Take out a ¼ cup of the marinade and put it in a separate covered bowl in the fridge.

Place the London broil in a ziploc bag and carefully pour in the marinade. Extra emphasis on the carefully or it can get messy.

As your closing the bag, try to force out as much air as possible. Let it refrigerate for up to 24 hours.

Turn the grill to medium-high heat.

Drain the marinade from the bag.

Rub the meat with the olive oil and season it with the salt.

Cook the meat on the grill. Cook it to your preference, but I suggest medium-rare. It brought out the flavors of the marinade perfectly.

Down the Shore: Off Season Eats in Cape May

Take the meat off the grill and put it on a cutting board. I know you’re going to want to eat it right then, but cover it loosely with foil and let the juices settle for five minutes.

Slice thinly against the grain.

Season if needed. Warm the marinade from the fridge. Serve and enjoy.

Twelve steps seems like a lot, but when you break it down between the creating the marinade and cooking the steak, it’s pretty simple overall.

There is more in the works. Right now in the Daily Shot Of Coffee lab, we’re testing more coffee influenced recipes so keep an eye out for more recipes on Honest Cooking in the future.

Mike Crimmins is the over caffeinated blogger behind Daily Shot Of Coffee and now Passion For The Pint, which revolves around his second favorite beverage. When he's not drinking coffee, he's probably cooking with it or asleep.