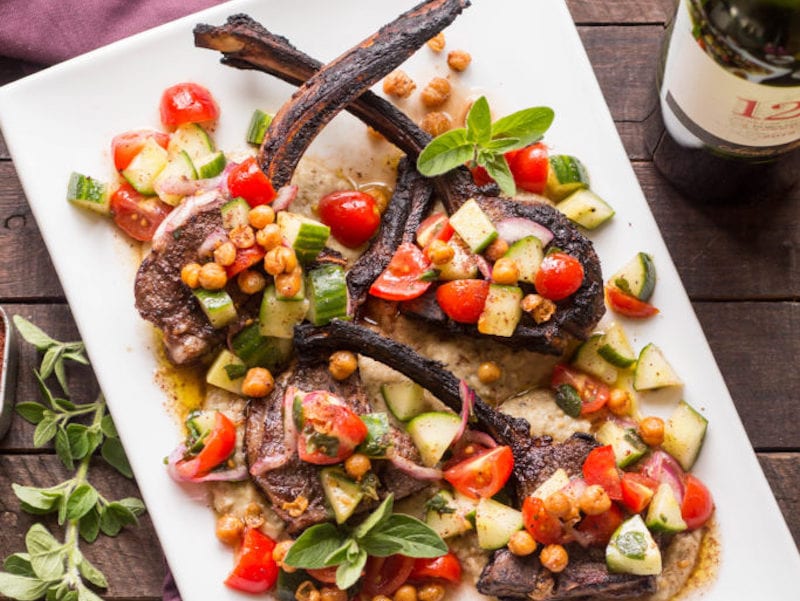 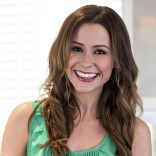 PARTNER POST: Dive into the 120 days of summer with Santa Rita wines that pair perfectly with the foods of the season, straight off the grill.
Bursting with bright flavors from tomatoes and cucumber, this grilled lamb with eggplant sauce and crispy chickpeas is a summer stunner that we can’t resist. 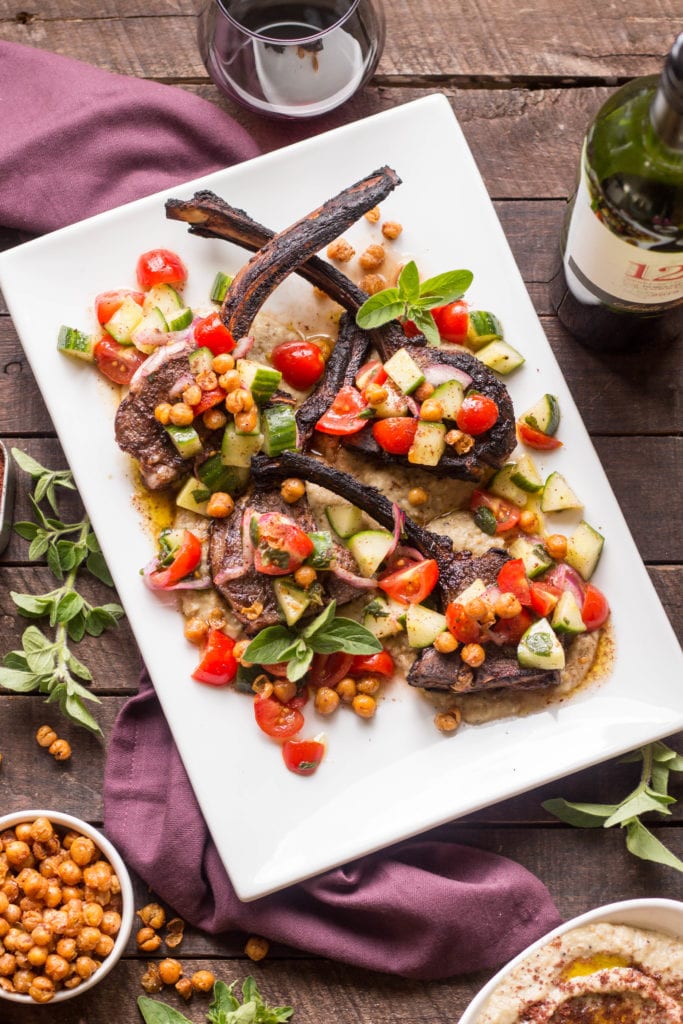 With Memorial Day weekend now under our belts, the summer season, and hence grilling season, is unofficially-officially upon us. This is my favorite time of year. And I know, I tell you that fifteen thousand times every June. It’s just that I get really fired up – no pun intended… okay, it was totally intended – about summertime stuff, because it turns me into a happier, healthier person. As soon as the sun starts shining and the weather warms up, I crave healthy food and being outside, while the rest of the year I just want to sit on the couch and eat cookies. 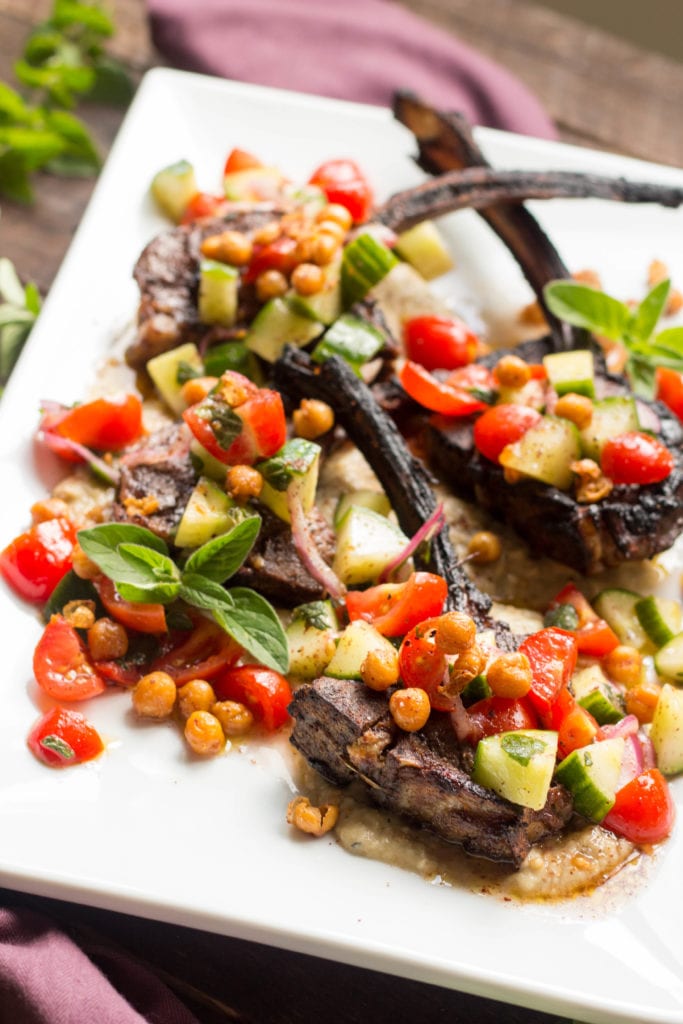 We don’t eat a ton of meat in this house, but we definitely like to have a solid source of protein at least a few times a week. I love steak, but lamb has become my favorite red meat of choice. We never had lamb growing up, as my mother was opposed to eating the youngin’s, and for a long time I was too. It took me a few tries to get into lamb, but I’ve come to think it has more flavor and character than other meats.

These chops take inspiration from Mediterranean and Middle Eastern cuisine, which have quite a bit of overlap, and both of which I’ve been really into lately. 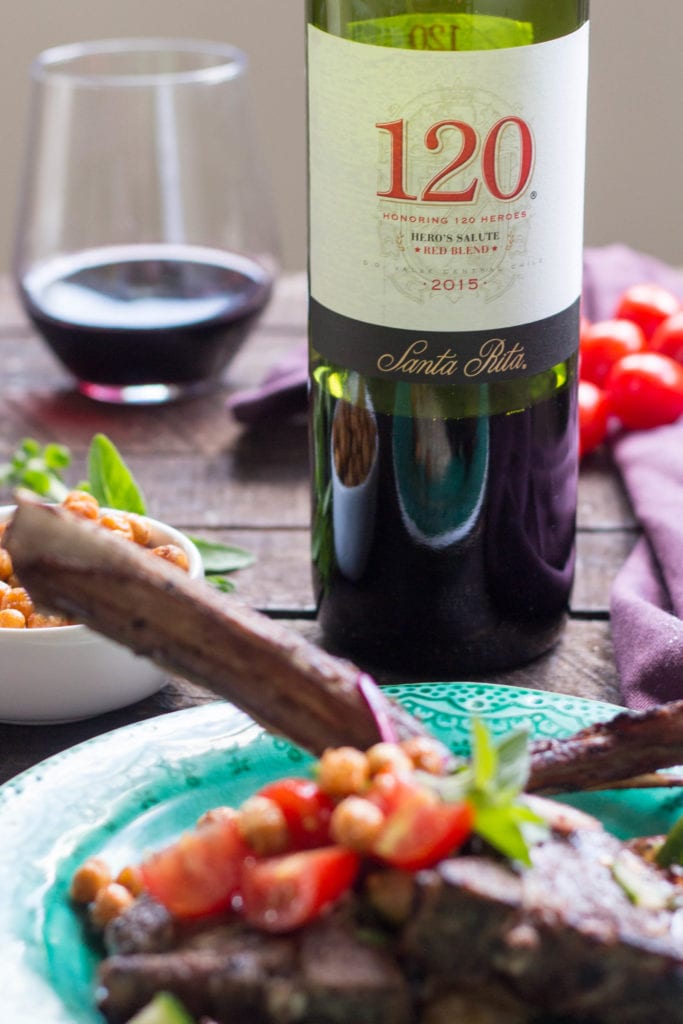 I marinate the lamb in a robust bath of red wine, lots of garlic, oregano, vinegar, Badia Complete Seasoning, honey and a touch of cinnamon. I chose Santa Rita’s 120 Hero’s Salute Red Blend for it’s fresh fruity elegance and balanced acidity. In addition to working well in the marinade, it’s also my pick for drinking with the meal. It’s bold enough to stand up to the meat, but light enough for a warm summer night. Santa Rita’s 120 series of wines was named after the historic event in which 120 soldiers took refuge in Santa Rita’s cellars in 1814 during Chile’s war for independence. I love a wine with a story, especially when it’s as tasty as this one.

After marinating, the lamb gets grilled, then nestled over top of a silky, garlicky roasted eggplant puree. It’s topped with a fresh tomato cucumber salad that’s accented with fresh mint and sumac, a tangy spice common in the Middle East. For an extra layer of texture and crunch, I roast chick peas until perfectly crisp and sprinkle them on right at the end. 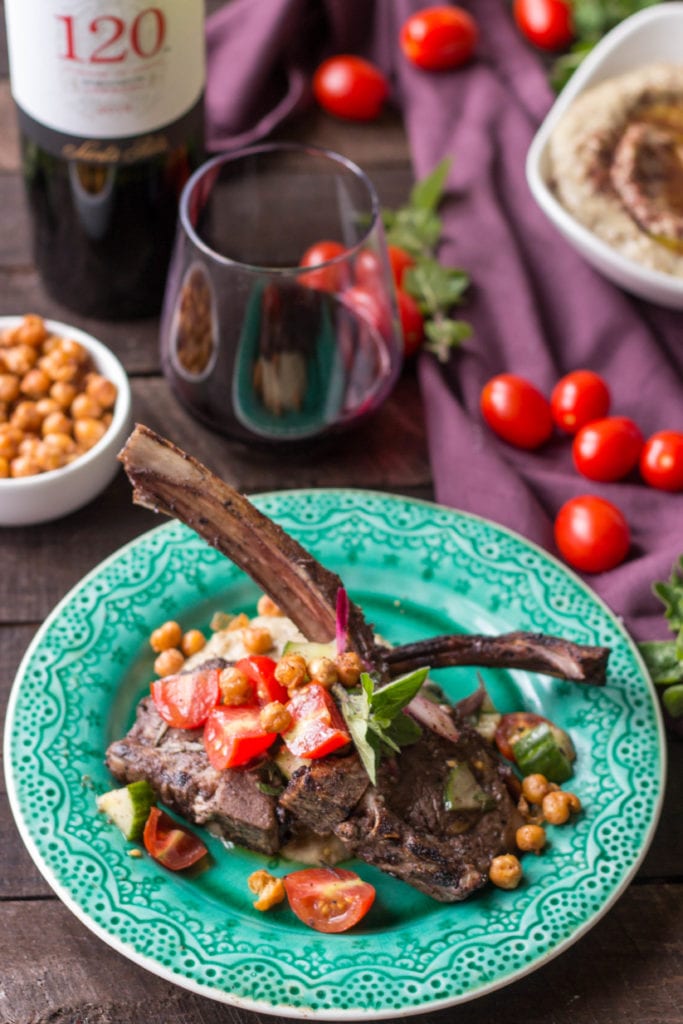 This dish is light, but substantial, and oozing with bright summery flavor. It might seem like a lot of ingredients and cooking, but it actually comes together quite easily. Any leftover eggplant puree is wonderful as a dip served with pita, and the crispy chick peas are excellent for snacking. I hope you give it a try. 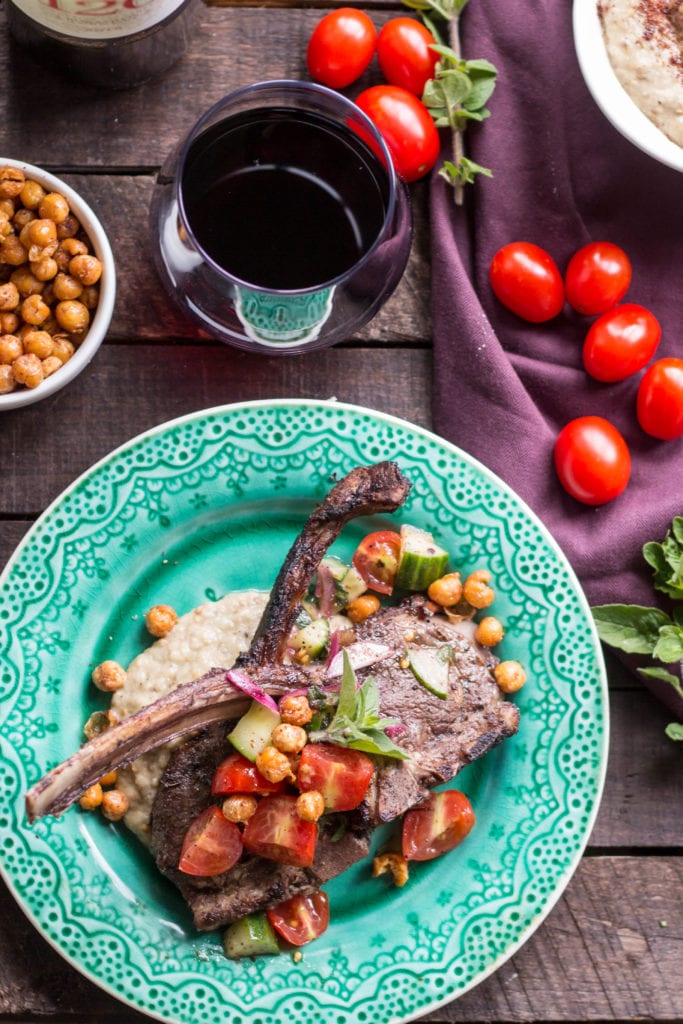 For the Lamb Chops

For the Eggplant Puree

For the Crispy Chick Peas

Penne with Zucchini, Pancetta and Ricotta