To me, nothing invokes summer like Mediterranean food. Immediately lemon and mint spring to mind, quickly followed by garlic, olives and fresh salads. And with Olympic fever winding down on both sides of the Atlantic, I thought a nod to Mount Olympus was in order.

Besides, kissing up to Apollo et al. might not be such a bad thing when it’s sunshine you’re after. And it seems (for me at least) to have worked like a charm. 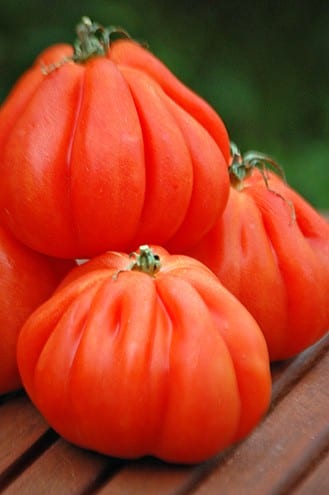 I decided to stuff these stunning Coeur de Boeuf heirloom tomatoes, uncooked, with a Greek-inspired spin on tabbouli, a Middle Eastern chopped salad. Substituting quinoa for the traditional bulgar and fresh mint for parsley, I also diced up fresh bell peppers, Kalamata olives and feta cheese (which you could easily omit if you’re vegan).

These self-contained salads make a flavor-packed light lunch or can be served alongside grilled meats at your next barbecue. The gods certainly seem to have liked them, and if they’re good enough for the Olympians, then…

Print
Author: Ruby Moukli
Serves: 4
Ingredients
Instructions
Notes
1. Measurements are in cups because there’s no real need for precision here. Use a teacup or coffee mug and adjust to taste. 2. You can use bulgar, couscous or rice instead of quinoa – simply cook according to the instructions on the packet. 3. Choose any large, fragrant tomatoes and don’t store them in the fridge or they’ll lose their flavour.
2.2.6