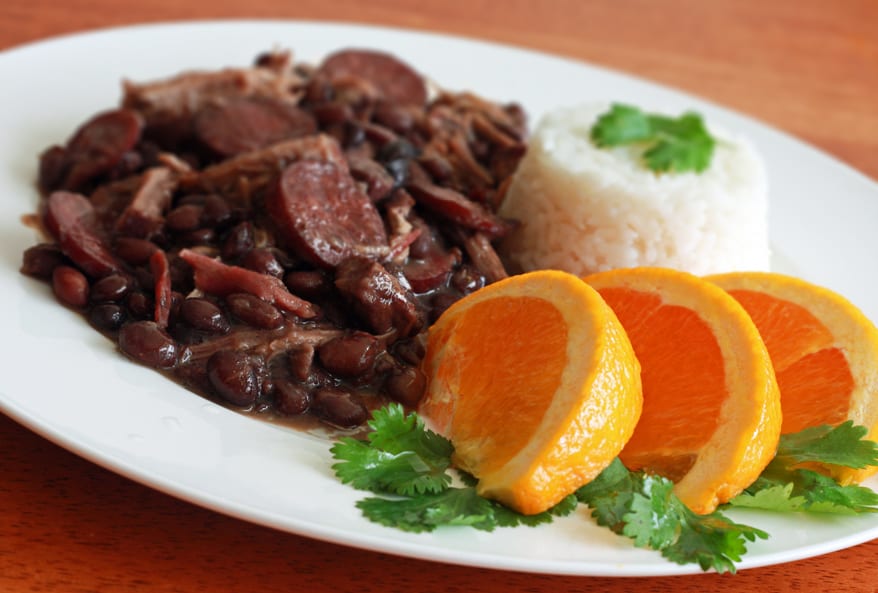 Feijoada is the national dish of Brazil and is the ultimate beans and rice dish. Made with several kinds of pork meat, slow-simmered to maximize flavor and served with refreshing slices of orange.
By Kimberly Killebrew 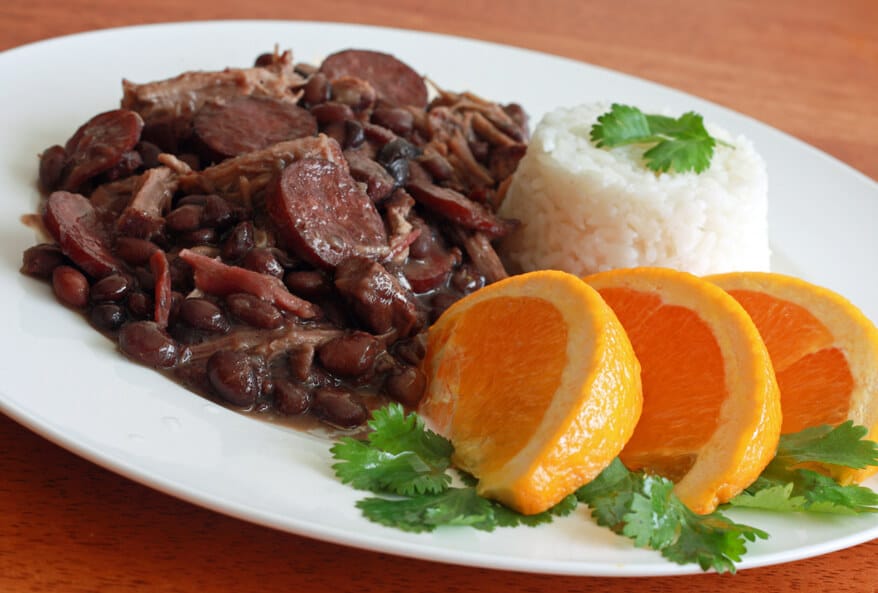 Feijoada (pronounced fay-jwa-da), is the National Dish of Brazil. It is essentially a black bean and meat stew, most commonly served with sliced oranges and rice, though fried bananas and chilies are also common accompaniments. Feijoada is made in virtually every Brazilian home and there are countless versions of it. This dish is found everywhere from the most humble of homes to the most sophisticated restaurants in Rio. Many restaurants even feature a “Feijoada Day.”

Feijoada not only uses practically the whole pig, it uses a whole family of pigs! Fresh, cured, salted, sausaged, and smoked – all thrown in together in one big pot of savory goodness. My version uses pork roast (slowly cooked in all the juices and later shredded), bacon, spicy sausage, smoked sausage, and smoked ham hocks. All of this is slow-cooked for a couple of hours with black beans and seasonings.

How about a little history on the origin of the dish?

Feijoada is believed to date back to the 16th century when it was made using the cheapest cuts of pork such as ears, snout, feet and belly. There are variations as to origin of this dish, one of them linking it to the 1.3 million slaves brought from Africa to work the sugarcane plantations of Brazil. Beans were a staple the African slaves were already familiar with from their homeland and when they were fortunate enough to benefit from leftover scraps of pork from the slave-owner’s kitchen, they made a meal of it that would eventually become the country’s national dish.

That’s the more romanticized version of its origin. Another version links it to Portuguese-influenced stews. Brazil was part of the Portuguese Empire until it won its independence in 1822, thus there is a lot of Portuguese influence in Brazilian cuisine.

Perhaps its origin in a combination of the two.

In any case, Feijoada is world comfort food at its best. The slow-cooked, deeply flavorful and smokey taste of this meat and black bean stew is addictive. The sweet and refreshing citrus provides a pleasing contrast and offers a quick cleansing of the palate before second servings of the stew are (inevitably) requested.

Alright, let’s get to that Feijoada recipe!