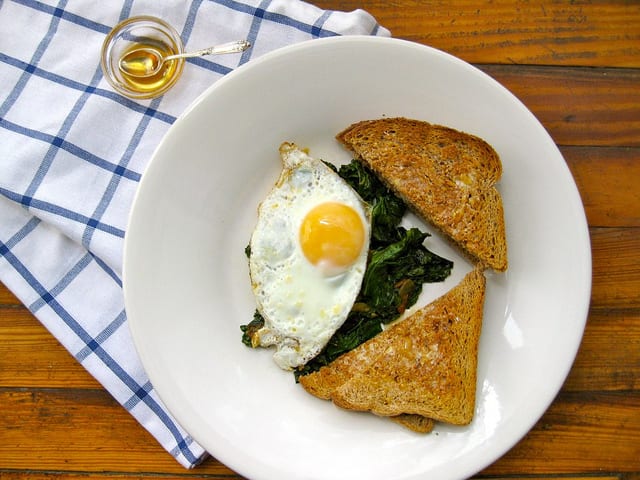 Aside from how obviously nutritious this breakfast is – what with all the kale and garlic and egg – it tastes good as all heck too.
By Carrie King 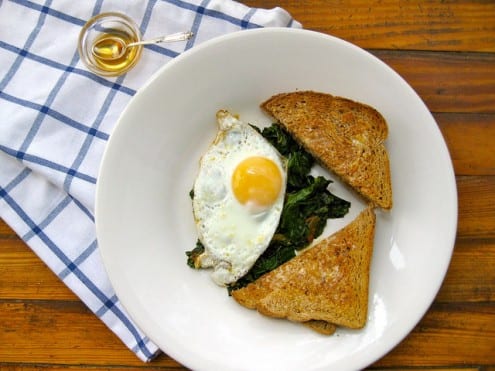 Kale sure is the popular kid at the greenmarket these days. But, mostly folks are looking for Dino kale, aka Lacinato kale, aka Tuscan kale. Its like Jason Bourne with all the aliases. I’m not sure at what exact point this specific type of kale started to get all of the kale kudos, but I don’t think it’s all that and a bag of chips. I mean, I like it a lot. I’m just saying, there are other varieties of kale out there. Other varieties of kale that bring more to the flavor party.

This Siberian kale is a prime example. It’s rather more tasty than Tuscan kale. It’s not as crunchy, but it’s still got body and I find it more versatile. I’ve used it in soups, salads, stir fries and quiches, and this week, I ate it for breakfast.

Wheaties, step aside, because this is truly the breakfast of champions.

Aside from how obviously nutritious this breakfast is – what with all the kale and garlic and egg – it tastes good as all heck too. I know what you’re thinking – chili and garlic may seem a little much for taste-buds that have only just rolled out of bed – but it’s all rather subtle and the honey kind of keeps this dish in check. Keeps it firmly planted in the breakfast category. Truthfully, since I have developed an extremely bad habit of running on coffee and caffeine fumes until around 11 or 11:30 every morning, this served more as brunch for me this week.

Speaking of brunch, I’ll leave you to your weekend. Hopefully, it’s filled with kale and eggs.

Hardly a recipe is needed for this one.
I roughly chopped half a bunch of Siberian kale and sautéed it in some olive oil, chili and garlic slices – that I finely shaved, Godfather-style – and seasoned it with salt and black pepper.
I chose sunny side up eggs, kind of crispy on the edges, because that’s how I like them. But you can go whatever way you prefer with the egg: fried, poached, scrambled, soft-boiled.
Here’s the clincher – serve this with whole grain toast, slathered in a bit of butter and lots of honey.
I highly recommend layering a bit of kale and egg on top of the sweetened bread and making sort of an open-faced sandwich. Savory kale – runny yolk – honey – crunchy toast. You get the picture.

I think this dish would work equally as well with swiss chard, mustard greens, other varieties of kale – any hearty green, really.