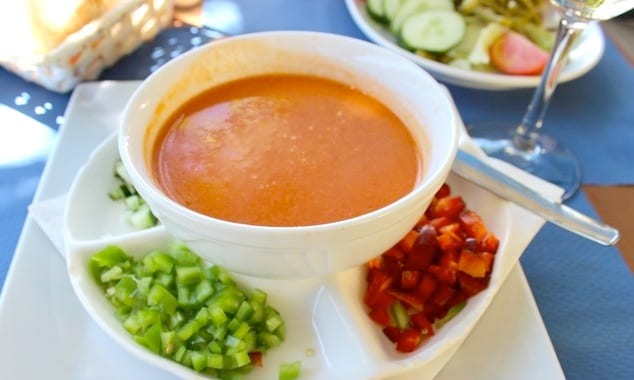 Granda, Spain is home to intricate architecture and stunning landscapes. Despite all the distractions, their delicious and varied gazpachos cannot be ignored.
It’s rare for a place to exceed my expectations. Usually when I travel, I’ve spent the previous few months reading about and planning for my visit, so that when I arrive at my destination it already feels familiar, and sometimes slightly disappointing. Every now and then, though, I come upon a place that blows me away. It’s kind of like falling in love. Granada was like this. 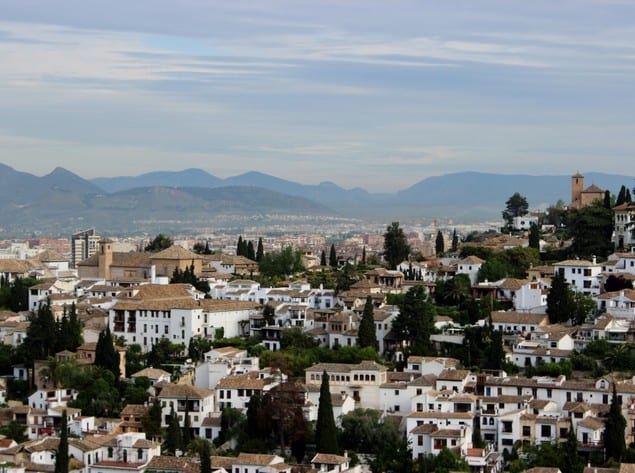 Our friends Maggie and Pete had been living there on a six-month sabbatical, and since I was going to be right next door on my trip to Portugal, I figured I’d fly down to visit them for a few days. I had been to Spain before, Barcelona and Salamanca, and liked them both, but neither one prepared me for the magic that is Granada. 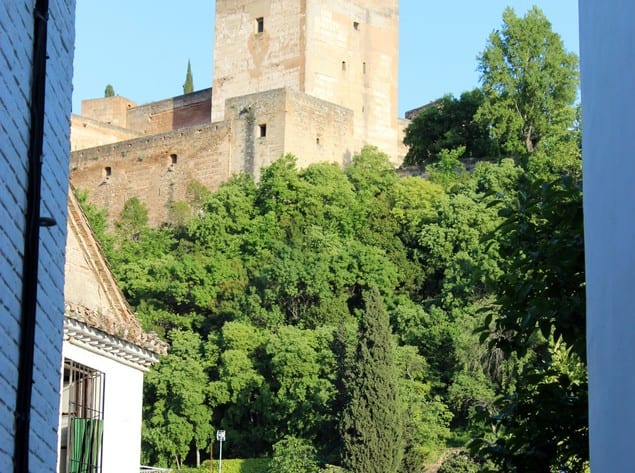 Maybe it has something to do with the Mediterranean light bouncing off the stone buildings, combined with the layers of history in the Medieval Moorish neighborhood of the Albayzin, or the abundance of fountains, or the majestic Alhambra overlooking the city, framed by the snow-capped Sierra Nevada range. This is a special place. 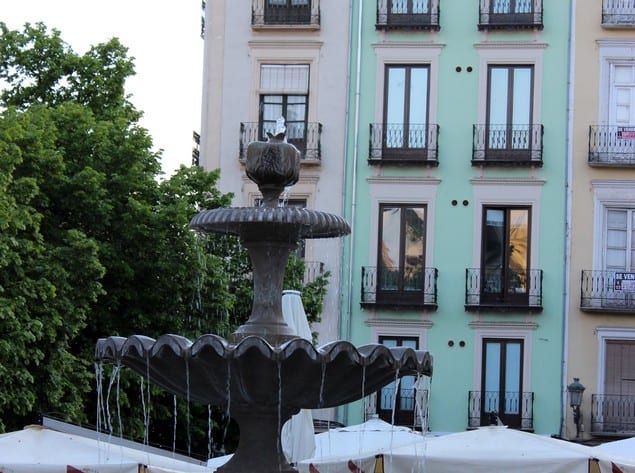 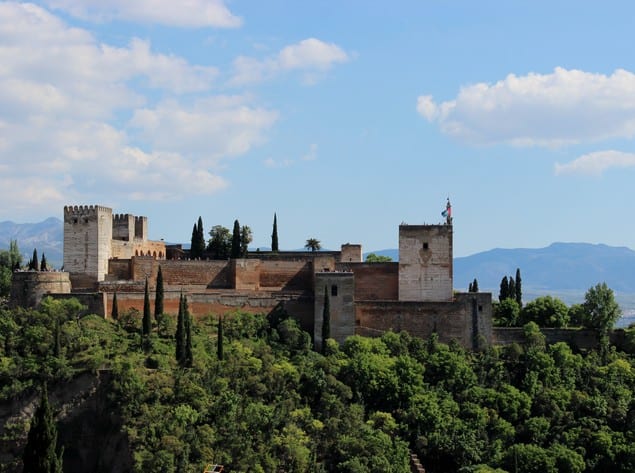 Shortly after I arrived, Pete and Maggie led me up the narrow, winding streets of the Albayzin to a restaurant perched across from the Alhambra. This modest spot has to have one of the best views in all the world. Alternating between sips of Ribera (did I mention that exquisite wines can be had for less than three euros a glass?) and smooth, garlicky gazpacho, I felt myself start to fall. 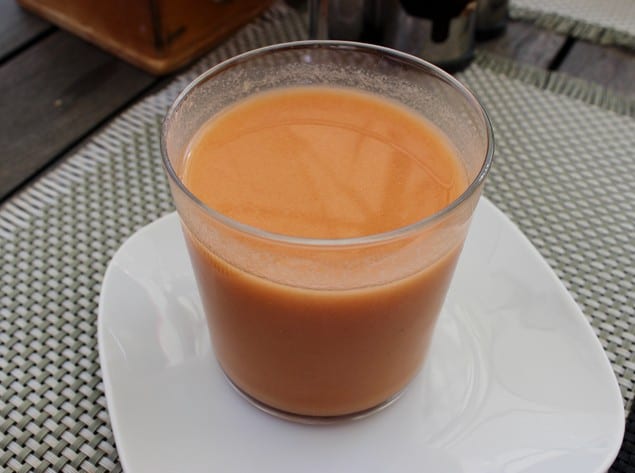 On our way back to their apartment, we passed by an ancient communal bread oven, walked under balconies made out of tile, and at one point turned into a small piazza, empty except for a central fountain and a  young man playing a haunting Spanish guitar. 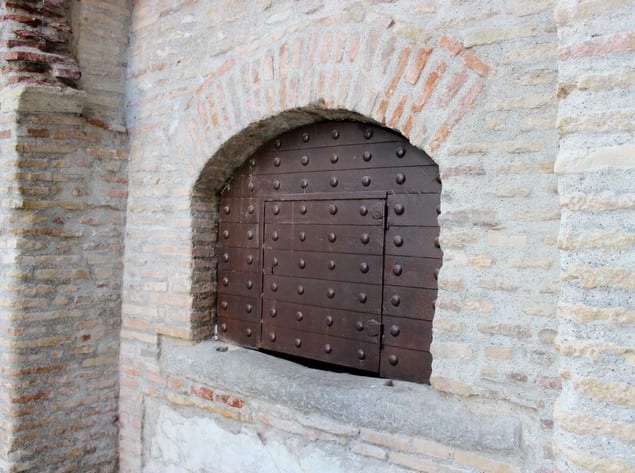 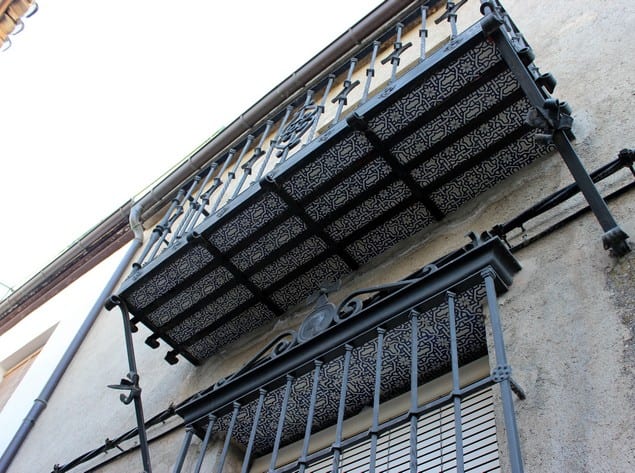 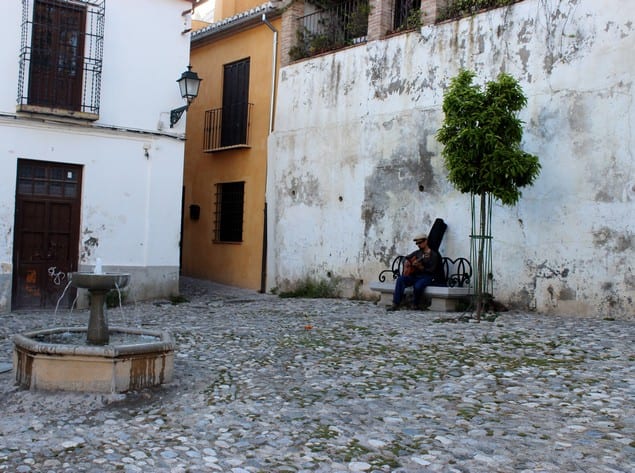 The next day, Maggie and I started off with a typical Andalucian breakfast of tostada con tomate, or bread slathered with fresh tomatoes. It’s served with olive oil, which you drizzle on top of the bread after pricking it with a fork to help the oil soak in. Delicioso. We then set off to explore the Alhambra, which soars above the city on a high plateau. The Alhambra’s rustic exterior, beautiful in its own way, doesn’t give any indication of the magnificent detail to be found within. 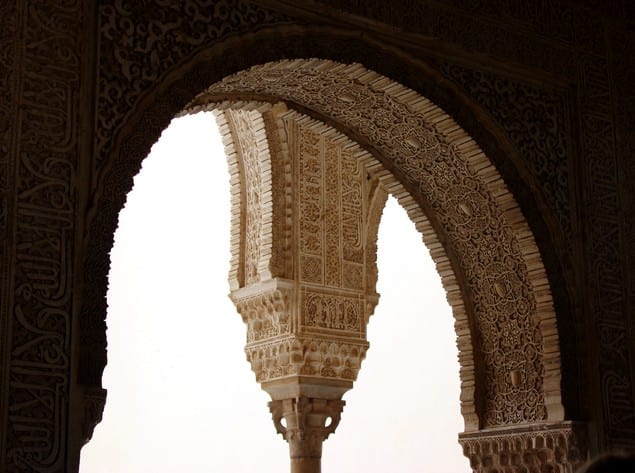 I’m not exaggerating when I say that it’s the most impressive structure that I’ve ever seen. Originally an Islamic palace and fortress complex dating back to the 13th century, it’s a jewel box of tile work, intricately carved plaster, wood, and stone, serene reflecting pools, and sculpted gardens. 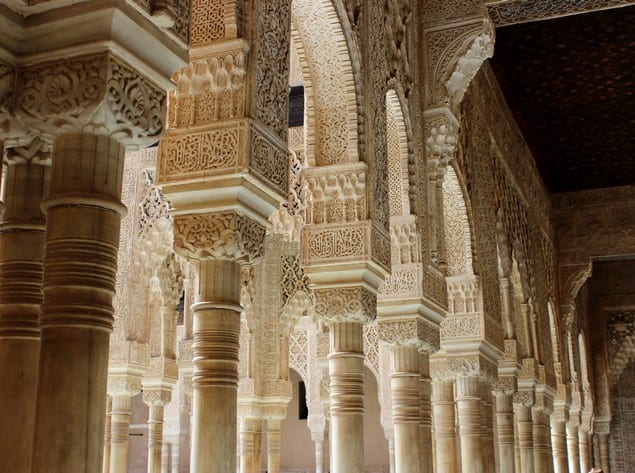 When the Moors’ 800 years of rule ended, the Alhambra fell into the hands of the Spanish monarchy. Although the monarchy renovated and enlarged the complex to suit their purposes, they fortunately did not significantly alter much of the architectural detail, thereby preserving its unique grandeur.  It was in one of the Alhambra’s rooms, the sultan’s throne room, that Isabella gave her approval and money to Christopher Columbus to embark on his voyage to the “new world.”

As we wandered through the Alhambra, I was struck by how nature is interwoven throughout— in the gardens and inner courtyards, in the glimpses of mountains through arching windows, in the green of the surrounding forest, and in the images of the natural world painted on the tiles and carved into the stone, plaster, and wood. Even though we were surrounded by other tourists, the serenity in each space was palpable. A Culinary Walk through Bobbio, Italy – Nature, Food and Traditions We stopped for a late lunch at a restaurant with an outdoor terrace overlooking the sultan’s summer palace. Maggie and Pete live about 15 minutes away from us in Vermont and we’ve known them for years, but there’s something about being with friends in a completely different environment that reveals a new side of the friendship, broadening and deepening it. Some of my best memories of various friendships over the years are from times when we were experiencing a different country together. That combination of familiarity and exoticism is, to me, one of life’s great pleasures.

Another afternoon, craving more gazpacho, I ordered it again and this time it came with chopped peppers and cucumbers to stir into the purée, creating an interesting textural contrast. No trip to Granada would be complete without a tapas crawl. The locals typically don’t eat dinner until around 10 pm, but they often lead up to the meal with several hours of drinks and tapas. Here’s how it works: for every round of drinks you order (soft or otherwise), your table gets one or two tapas on the house. Sometimes you have a choice in what’s delivered; sometimes you don’t. Pete and Maggie took me to some of their favorite spots, complete with entertaining staff, where we sampled the wines and the accompanying tapas: pork scallopini, Spanish tortilla, razor clams with fresh lemon. No need to order dinner after snacking on the likes of these. As we strolled home to their apartment through the winding cobblestone streets, I knew I’d be back. I’d gotten just enough of a taste of Granada to whet my appetite.

Print
In this recipe for classic gazpacho, I experimented with the amounts of garlic, vinegar, and olive oil until it tasted like the best one I had in Granada. The more olive oil you add, the richer and creamier it will taste, like a garlicky tomato smoothie.
Author: Sheila McGrory-Klyza
Recipe Type: soup
Cuisine: Spanish
Serves: 4
Ingredients
Instructions
3.2.1275 An EGG For Every Occasion — Frothy Peach Cocktail