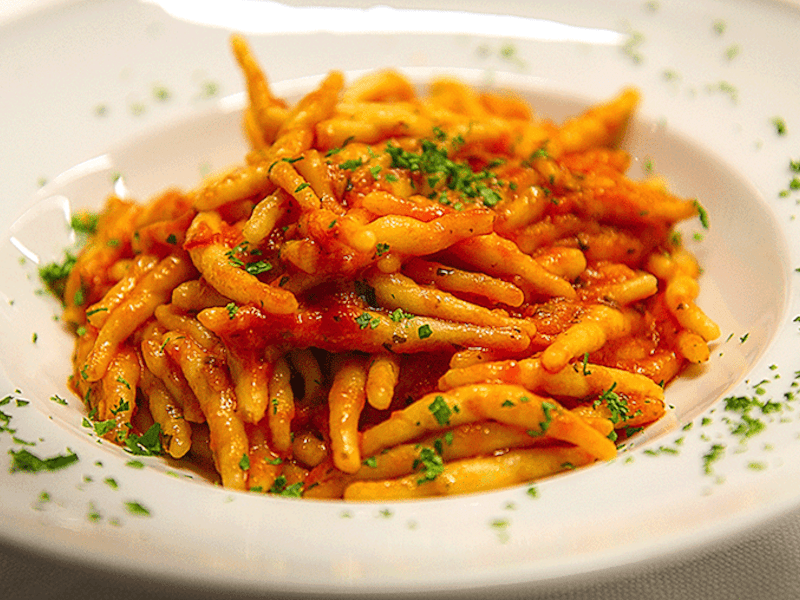 The cuisine in Florence is like the people who live there: simple, steeped in history, rough, ironic. Often it is appreciated only after a second tasting.

Florence is well-known worldwide for its incomparable Renaissance history. In Florence, however, there are several must-taste recipes of Italian cuisine. A few weeks ago I went back to Florence. I walked around the taverns, the market stalls and carts of street food. Read on and take a trip with me between grilled steaks, slow-cooked recipes, weird-but-tasty street food, vegetarian soups, crunchy bruschetta and local cheese of the Florentine tradition!

I returned to Florence after more than a year. For me, born in Bologna and expatriate in the US in 2013, Florence is my second home. Here I use to live and study (sometimes …) for six years. Here is where my wife’s family lives and here is where I turned on the stove the first time, collecting some successes and many burns.

One apartment, seven boys and a constant coming and going of people; these are the first memories that come to me from the past. Memories of parties, dinners and hungry girls. The kitchen sink was always cluttered with dishes, with one single shared refrigerator — fresh supplies mixed with leftovers and other weird things. Discussions were had on the management of the common funds. It was the student life. T-bone steaks alla Fiorentina admired more over the glass of the butcher than on my plate…. a lot of street food. Sharp flavors, strong, brutal. The discovery of the quinto quarto (the entrails of the cattle, destined to poor people in the olden time, but actually delicious delicacies for gourmets) after so many years of vegetarianism.

I walk along from Borgo Albizi to Pietrapiana Street, going beyond the Loggia del Pesce. I’m almost arrived at Piazza Sant’Ambrogio when I glimpse the front part of the cart of the Lampredottaro (lampredotto seller) just behind the corner. Vapors come out intermittently from a large pot — where I am, I can’t see it, but I KNOW that it is there. Getting closer, I see a bunch of people who already gathered at the space in front of the cart. As I had imagined, the pot of Lampredotto opens and closes, Pierpaolo (the Lampredottaro) pierces the cow stomach cooked to perfection and laying it on the cutting board. Fast and precise cutting reduce the meat into small pieces; salt, pepper, salsa verde (read here my personal version with wasabi) and the sandwich is ready! With the first bite comes some flavors that I missed for a long time. The calloused meat, made unbelievably soft due to the slow cooking blends with the crispy bread crust while the inside remains soft.

Sergio and Pierpaolo are the latest owners of the older lampredotto’s bench still in business in Florence. Everyday their knifes pass go through 50 pounds of lampredotto. Sergio hands me a large portion of Trippa alla Fiorentina: tripe stew with tomato sauce and a sprinkling of Parmigiano Reggiano cheese. I look at the crowd growing,with the passing of time; the spoken Florentine inflection is predominant, but there are also many persons coming from abroad. What has long been a poor food, eaten only by locals, is opening up to the world. The face of those who try for the first time tripe or lampredotto is something I can’t miss, I know how they feel because it happened to me! Their expression changes several times in a few seconds: curiosity, disgust, surprise, pleasure, desire, addiction! If you want my advice: for your first time, opt for the sandwich, the serving bowl without bread is only for experienced!

In just a few steps, I reach Piazza Santa Croce and move on to Via dei Neri. Just behind the Uffizi Museum, the Antico Vinaio is waiting me. Bread without salt and olive oil green, intense and spicy. It’s so difficult to find far from Tuscany! And the cured meats: Tuscan ham, shoulder boar, Finocchiona (typical spicy salami with fennel seeds and red wine), Soprassata (I am not sure you want to know how it is made, but I can assure you: it is very good; I can confide you that somehow the pig’s head is involved…). To combine the cured meats on the counter of Antico Vinaio are waiting me seasoned and soft Pecorino cheese, olives and croutons with fresh tomatoes, cannellini beans and fegatini (chicken liver and hearts patè). All I can find in this place is a hymn to the simple peasant food.

Markets and botteghe (small artisan workshops); In the middle of them, local food and traditional recipes. In Piazza San Lorenzo, between the leather seller’s stalls there is one of the most ancient covered market of Florence, the Mercato Centrale. Inside the market, locals are buying supplies daily: Chianina beef, Tyrrhenian Sea blue fish, fruits and vegetables from the surrounding countryside. This is a scene, untouched through the centuries. On the second floor, the market was renovated a few months ago. A large space offering the great variety of Florentine cuisine available to those who want to sample a plenty of products at the same time: buy at the counters and looking for a place at the tables. For who want to learn, a space dedicated to cooking classes hosted by local cooks who hold daily lessons.

Just outside the Mercato is what is perhaps the most popular trattoria in Florence, the “Fiaschetteria Mario”. Open since 1953, this restaurant embodies the Florentine spirit brought forward by three generations. “Mario” is open only for lunch, as is the tradition of Florentine trattorie. Customers sit where there is room, eating together as it is clearly written on the sign near the entrance. Once you are finished eating you must get up and leave the place to those who wait, there’s not time for small talk! If you are willing to accept the rules of the house you will be rewarded with an absolutely authentic daily menu, depending on the availability of the fresh supplies prepared every day.

Soups and local bread are two staples of Tuscan cuisine. In my years in Florence, with the money that can be found in the pockets of a student, bread and soups were the classic trattoria meal to accompany a wicker bottle of red wine to share with friends. The typical Tuscan bread (Ciabatta and Bozza are the most popular shapes) is without salt to not cover the taste of the food. The queens of the soups with bread are Pappa al pomodoro with basil and fresh tomatoes and Ribollita with Lacinato Kale (Cavolo Nero): simple products, created with leftover bread, which enhance the flavor and texture details. These are two delicious dishes, that have become famous throughout Italy. Also try some Pasta e Fagioli (cream soup with whole and crushed Borlotti beans and served with or without sausages) and Pumpkin soup.

A meal in Tuscany has to start with a selection of crostini such as Fettunta, a simple slice of lightly toasted bread rubbed with garlic, salt and extra virgin olive oil, crostini with Cannellini white beans (served sometimes with little shrimp), or crostini with chicken livers, are the most popular.

Crossing Piazza della Signoria, along the Piazzale degli Uffizi, I reach the Lungarni (the roads along the River Arno). Walking on the Ponte Vecchio across the river I enter in Oltrarno, the part of the city most beloved by the Florentine people, that includes the districts of Borgo Santo Spirito and Borgo San Frediano.

Wandering through the streets between Palazzo Pitti and the church of Santo Spirito, I stop to have a lunch at the trattoria “Quattro Leoni,” in Piazza della Passera. “I’ve missed a bit of carbohydrates,” I think, entering the restaurant. Sitting at a table after waiting a few minutes, I order a dish of Pappardelle (large Italian noodles) seasoned with wild boar sauce. After the Pappardelle I attack a big portion of Peposo all’Imprunetina, the typical beef stew slow-cooked into red wine, spiced with plenty of black peppercorns. I can’t miss the dessert so I decide for the classic Cantucci con Vin Santo (typical cookies poached in local sweet wine). Eating I look the dishes come from the kitchen: I will taste them in the following days: Fiocchetti con taleggio, pere e asparagi (pinched strips of fresh pasta with tasty soft cheese and cubes of pears and asparagus), salt-preserved cod alla fiorentina, fried meats and fish. The coffee at “Quattro Leoni” is served with mocha: it smacks of home, nice alternative to the usual espresso.

San Frediano is a neighborhood of Florence that is resistant to most attempts at renewal, often dictated solely by a desire to massive increase in revenue. Here I choose to eat the Bistecca alla Fiorentina (typical Steak of Florence) at “Antico Ristoro Di Cambi” a historic restaurant of San Frediano, open for over 60 years. Cousins ??Stefano and Fabio carry on the legacy of the restaurant today with flying colors. The Bistecca alla Fiorentina, simply called Bistecca in Florence, is a cut of sirloin of beef characterized by the typical “T” bone, weighing between 1.5 Lb to 4 Lb. Personally, the Best cut for the Florentine steak weighs 3 Lbs. and is quite a big deal! There is only one way to cook the Bistecca and if the cook is willing even to consider the idea of ??cooking it in a different way, get away because that place is a tourist trap!

I call my friend my old friend Samuele, one of the famous “seven” who used to share the apartment with me in Florence at university times. We drink a few glasses of wine and talked about the past; memories resurfacing again. But when the steak came to our table, we quickly stopped talking. The meat was magnificent on the wooden cutting board, four fingers thick and still smoking, sprinkled with coarse salt. There’s also a few of delicious side dishes, Canellini white beans and baked potatoes, but our attention is fully on the meat. Stabbing the knife into the steak, the meat is unbelievably soft in all its parts still rouge and juicy. Samuele and I wolf down the steak enjoying the moment.

Leaving Florence displeases me. It is a city that welcomed me, made me angry and fed my body and mind. The food they offered me was special, sometimes brutal, but sincere and honest. The flavors of the local recipes are distinct, using a few ingredients which are not open to manipulation. I leave you one last tip: approach the local food with curiosity and without fear to try something completely different from what you are used to eating at home, you will be rewarded!