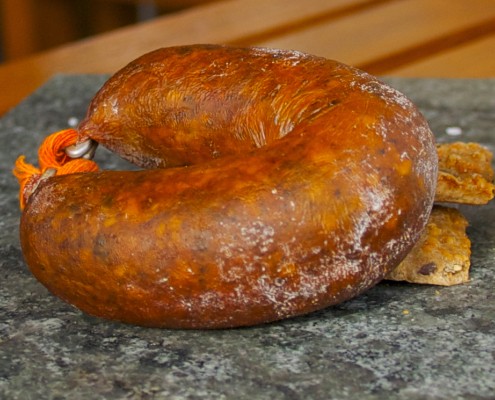 Brussel Sprouts – Something to be Thankful for

Steen Hanssen takes us on a short trip through the vast German liver sausage tradition.
By Steen Hanssen – Photo by Jarle Kottmann

More than 1600 different types of sausages are estimated to be produced in Germany. A general classification based on production method divides them into three basic categories;  Rohwurst (Raw Sausage, with raw pieces of meat and fat), Brühwurst (using heated or cured meat) and Kochwurst (with meat that has been thoroughly cooked). Examples of the Rohwurst category include smoked Mettwurst or air-dried salami. The Brühwurst family includes Weisswurst , Frankfurter and Leberkäse. In the cooked category we find Sülze or headcheese, blood sausages and Leberwurst as pictured above.

As the name indicates, the typical Leberwurst  is a sausage that includes liver (Leber in German), usually pork. The liver content will normally never exceed 25% with the remainder made-up by minced pork cuts, speck, fat, seasoned with salt, pepper and other spices and herbs of which marjoram will be the dominant.

A particular famous Leberwurst is the Frankfurter Zeppelinwurst named after Count Ferdinand von Zeppelin (inventor of the namesake air-ship). Legend has it that on 15 March 1909, Master butcher Herr Stephan Weiss created his signature Leberwurst and obtained Count Ferdinand’s personal approval to name it Zeppelinwurst. From this glorious day onwards the Zeppelinwurst became an obligatory part of the Zeppelin Air-ship’s onboard menu and Herr Weiss marketed his Zeppelinwurst with the slogan “Ein Genuss zum Abheben gut” (A pleasure good for take off) It’s almost certain that the Zeppelinwurst was on board the ill-fated Hindenburg when it crashed into the docking tower at Lakehurst, New Jersey in 1937. Whether or not Master butcher Weiss kept his slogan after the crash remains unclear.

Brussel Sprouts – Something to be Thankful for