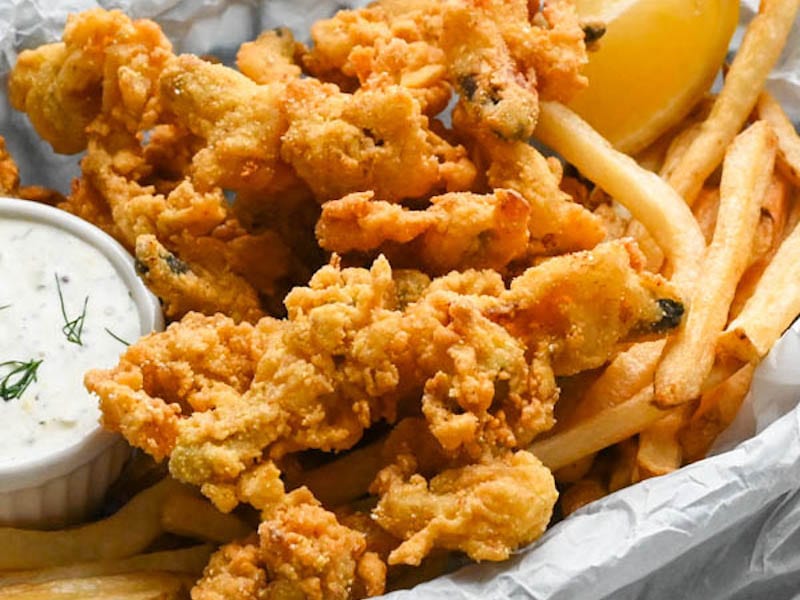 Lisa is a South Florida based food blogger who derives…

Crispy, golden Deep-Fried Whole Belly Clams are crunchy, chewy and a little bit briny — all in one bite. Great with homemade tartar sauce and fries. 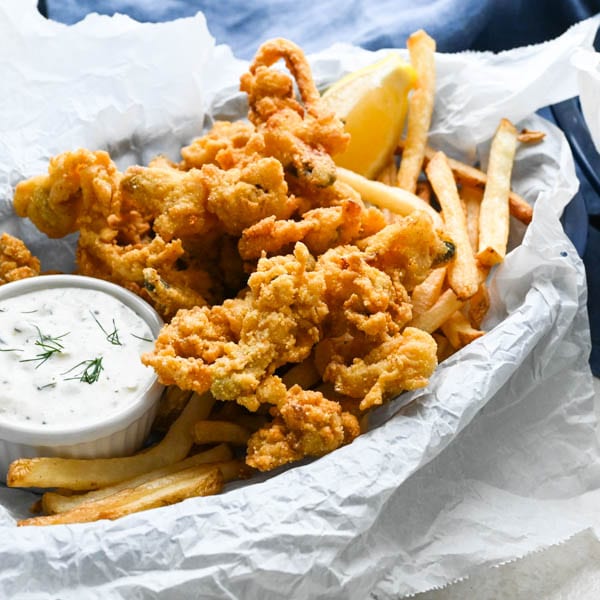 If you’re a fan of fried seafood (and who isn’t?), you’re gonna want to make a batch of these fried whole belly clams. To make them in the traditional New England style use Ipswich clams (a.k.a. Steamers or soft-shell clams) and use the whole clam bellies, strips and cleaned neck. Frying the clams is the easy part, but I’m also sharing a much easier method on how to shuck clams. Don’t forget the simple tartar sauce. Are you ready? 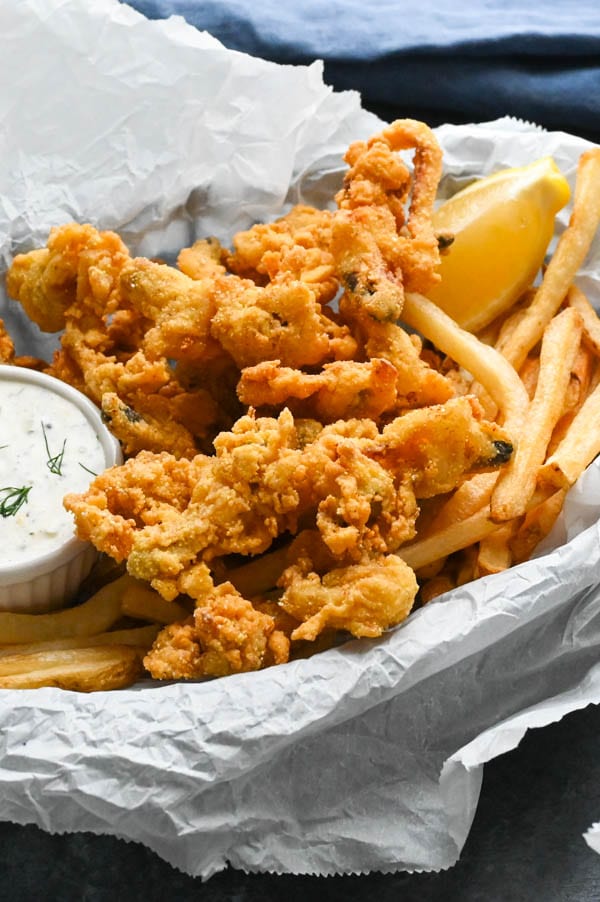 Love New England recipes? Check out my other favorites: Authentic New England Clam Chowder recipe, Clam Chowda Pizza recipe, Warm Lemon Butter Lobster Rolls recipe – and now I give you Fried Whole Belly Clams with Simple Tartar Sauce. These are a New England summer favorite, folks (as demonstrated by the multitude of clam shacks dotting the Northeastern coast) — and while I was leary about where to find the clams, they actually had them at our local fishmonger, Pop’s Seafood. 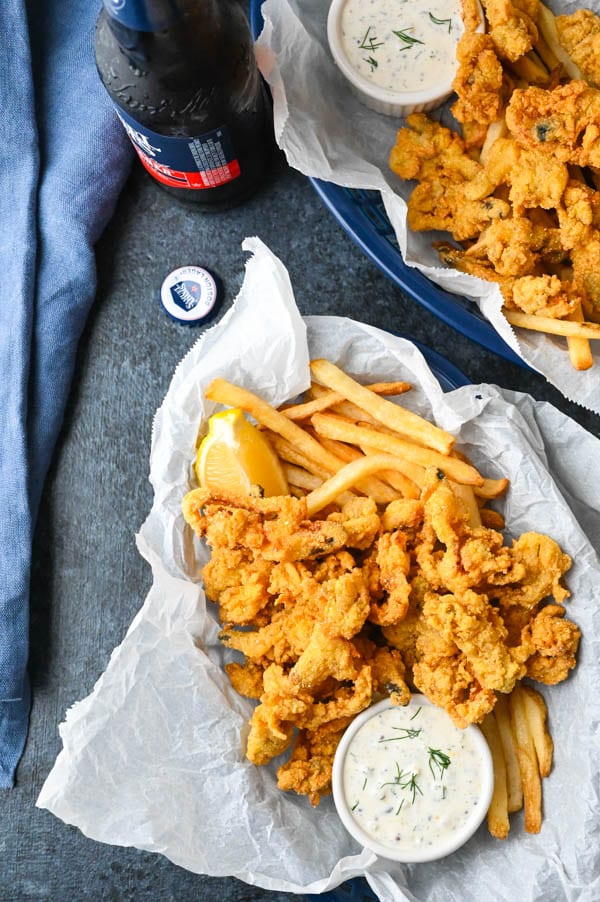 Let’s talk about the clams. I found it very confusing when looking at fried clam recipes to determine what type of clam everyone was talking about. Websites bandied about vernacular like steamers, soft shell clams, Maine clams and Ipswich clams. Turns out they’re all pretty much the same variety of clam (the biggest difference being from where they come from).

Having come from Virginia, I thought a soft shell clam would have a “soft shell”. Not. The shells are just thinner and more brittle than traditional little neck clams and other varieties. 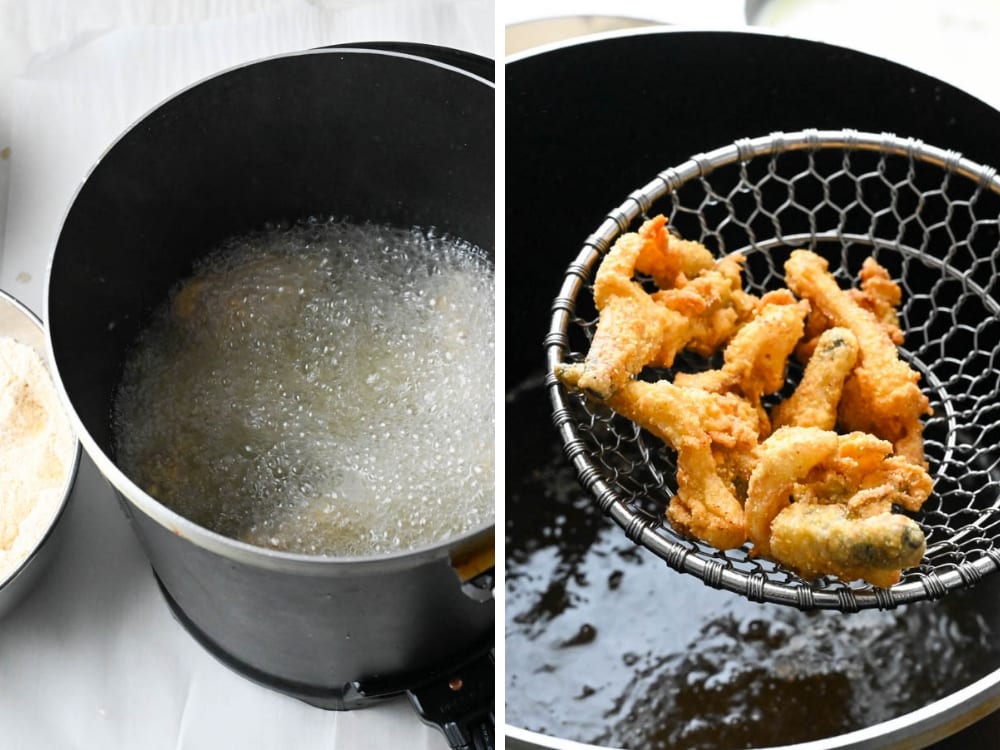 There are three main components to the clam.

-Belly – The belly (the most tender part of the clam) is the soft, round center of the clam.
-Strip – Clam strips refer to the loose hanging piece under the belly.
-Neck (Siphon) The neck is actually the chewy and kinda gross part that protrudes outside of the clam.

A whole belly clam refers to the entire clam insides (belly, strip and neck) and that’s what we’re making today.

Once you’ve obtained the clams, you want to give them a good soak in fresh water. This allows them to naturally discharge some of the sand and grit that they may have in their siphons (neck) and loosen it from the outer shell. 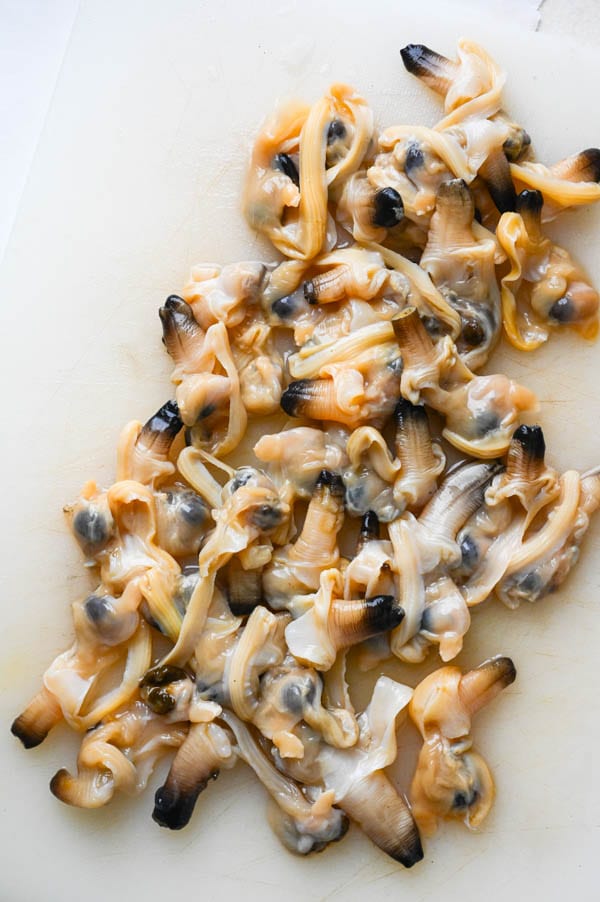 So here’s the skinny on how to shuck clams… These bivalves are not interested in becoming your game-day meal, so prying them apart with your bare hands will prove a battle of wills, that, trust me, the clam will win. So, how do you get to the briny mollusk? I watched a multitude of You Tube videos and these two were comprehensive.

How To Shuck Clams Two Ways:
Not my favorite, but it works…
Cut through the muscle on either side of the clam next to the hinge. Once the muscle has been cut, there’s nothing holding it shut and it’s easier to open.
Run your knife around the clam to free it from the shell.
Remove the unsightly outer membrane from the neck (the dark black portion of the clam).
Slit the neck vertically and check for any grit or sand.
Transfer the clams to a clean bowl of cool water and rinse several times to ensure no grit is evident.

By far, the easiest method…
Bring a pot of water to a boil.
Add the clams and let them blanch in the water for about 20 seconds (this won’t kill the clams, but it’ll relax them, like a hot sauna would relax you.) Click here to see how we did it.
Drain the hot water and immediately plunge them into cool water. Swish with your fingers to help dislodge sand and grit (there’s a lot of it with these guys — cause they live in the mud).
Remove a clam from the water and gently pull apart the shell — click here to watch how super easy it is.
Scoop the whole belly clam from the shell with your fingers.
Pull on the outer layer of the neck (the nasty bits) and discard the membrane. Cut the black tip on the neck, it’s the chewiest part of the clam. Not all people do this, but I recommend it.
Transfer the whole belly clams to a bowl of fresh clean water and give them a swirl to dislodge the grit. Now they’re ready to use.

The rest is easy. 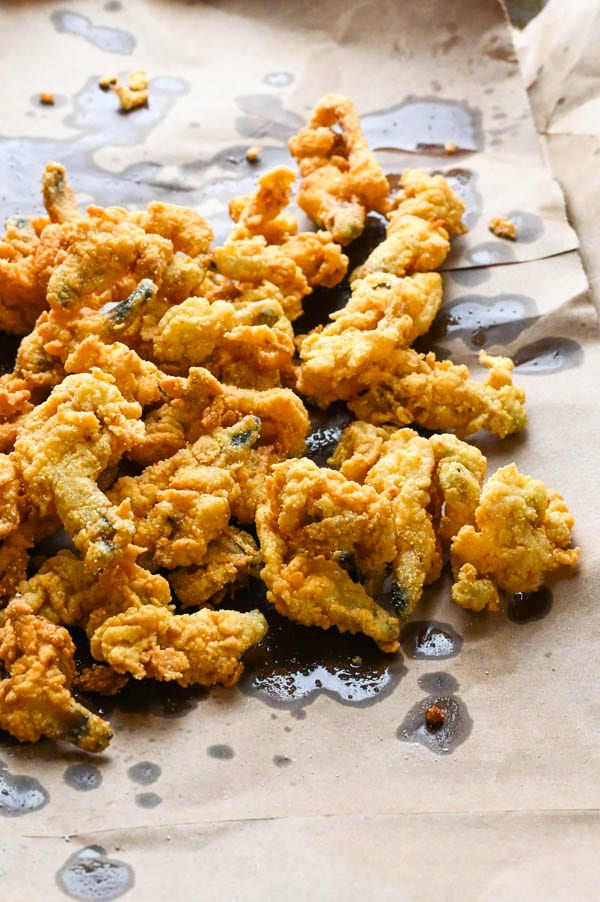 Serve the clams with tartar sauce and a wedge of lemon. I hear they sell bottled tartar sauce in the grocery store, but honestly, I’d rather mix it up myself. This simple tartar sauce blend takes about 5 minutes to make — though you should make it before you start on the clams. You don’t want your hot clams getting cold while your mixing the sauce and besides, making the tartar sauce in advance allows the flavors to marry.

The traditional New England clam shacks complete the meal with a bed of french fries. I can attest that they go together well — though, I admit to accidentally dunking a clam into ketchup and fries into the tartar sauce on a few occasions. You can’t blame me, it’s all so good!

Click HERE for the clam and tartar sauce recipe. 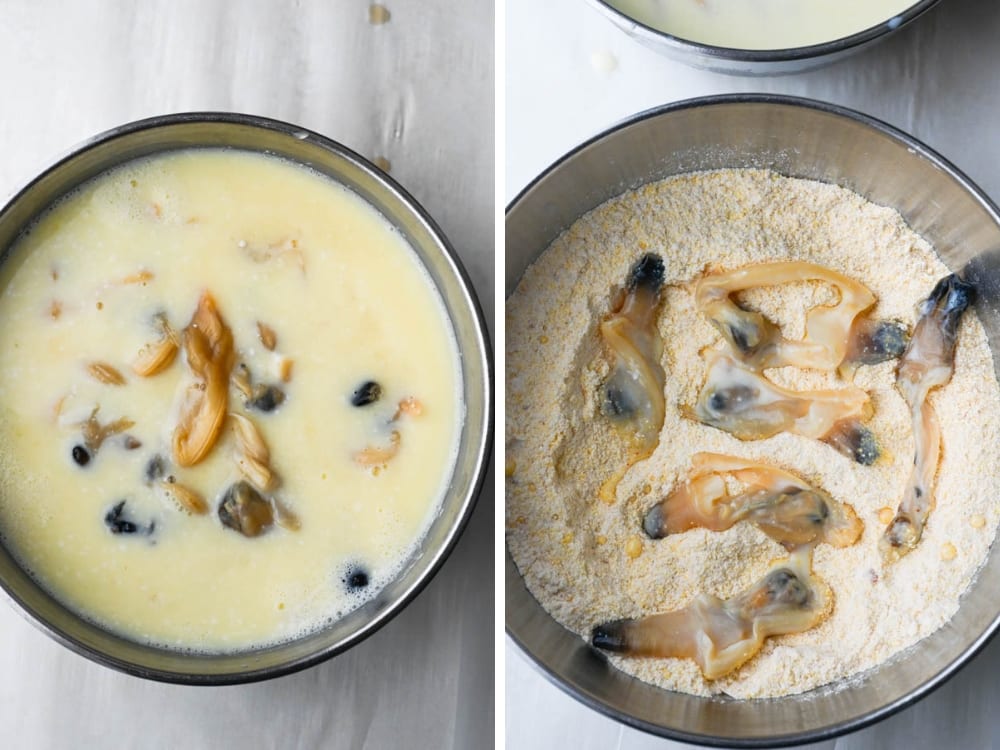 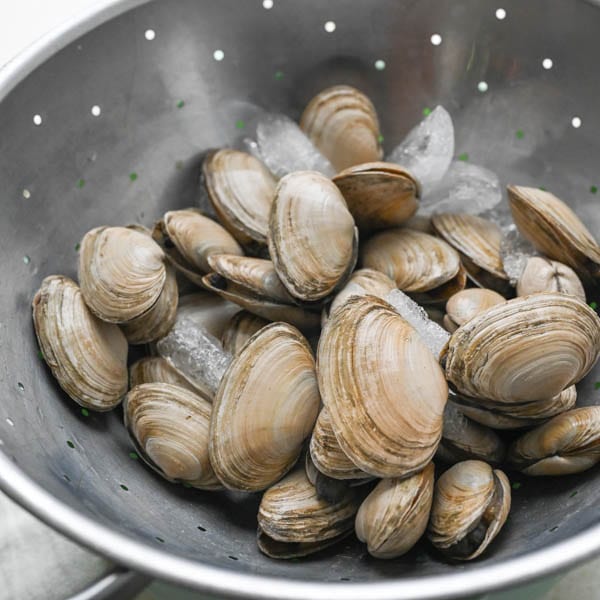 Lisa is a South Florida based food blogger who derives inspiration from a diverse family food-background, which includes southern comfort foods, traditional French and Caribbean cuisine. On her blog, Garlic and Zest, she explores fresh, innovative flavors and the inexorable link between food and family. Her approachable fare tastes like home.

Clams and Linguini in Wine Sauce