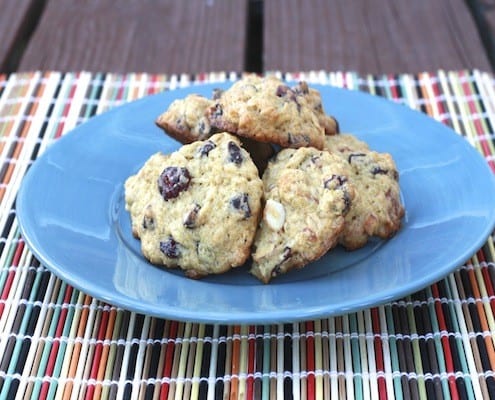 As it turns out, quinoa is not just a healthy ingredient, but it’s pretty darn versatile too. After using it in chili, salad, and meatloaf, I’ve discovered it’s one of those staples I need to keep on hand in my kitchen. Even better, I can now use it for COOKIES! I came across these quinoa cookies in Bon Appetit and made a mental note to try them sometime when I had some extra cooked quinoa. No less than a day later, my mom arrived in town with a Tupperware full of cooked quinoa! Aren’t moms the best?!

Because all cookies are better with chocolate, I added a handful of dark chocolate chips to the dough along with the dried cranberries and chopped almonds. The dough, even with the quinoa folded in, tasted no different than your standard cookie dough. These cookies baked up nicely, although I made them quite a bit smaller than the original recipe called for (and consequently took them out of the oven a few minutes earlier). Although they were good at room temperature, I had a sneaking suspicion they’d be really good cold, so I stuck a bag of them in the freezer. As it turned out, my favorite way to eat these cookies was straight from the freezer. They were still soft enough to bite into and had a great crunch from the almonds and cold chocolate chips.

Next time you’re matching a batch of quinoa, make a bit extra and give these cookies a try…you can’t beat cookies with an extra boost of protein!

Dining Down Under: Mini Chilli and Caramelised Onion Jam Tarts