Perfect with a bowl of chili or on its own, this quick cheesy beer bread is easy and so tasty. 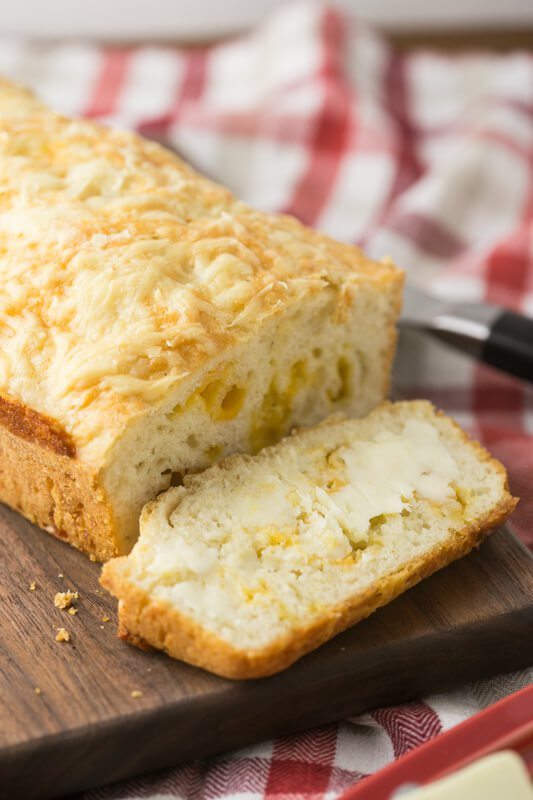 So…when your husband co-owns a beer store, you have a pretty big selection of beer at your disposal and you only have to send a text to get it (just FYI, we do pay for the beer we bring home, lest you think that we are rolling in “free” beer). That seems like a pretty good excuse to incorporate beer into as many recipes as possible, no? Honestly, though, I could make this beer cheese bread on the weekly and just leave all the other recipes…that’s just how good this bread is. I promise you, it’s better than any beer bread you ever made from a pricey mix.

The tricks to this bread (which I adapted from a recipe in the Cook’s Illustrated Baking Book):

1) Lots of cheese
I mean, it’s beer cheese bread. Why skimp on the cheese? Cutting the cheese into cubes instead of grating it results in the most amazing little pockets of cheese distributed throughout, and crusting the top and bottom with Parmesan means that your bread will have a nice, sharp, crusty, cheesy edge.

2) Lager or Pilsner
I mean, you can certainly use whatever beer you want (I wouldn’t recommend something chocolatey or anything like that), but the light flavor of a lager or pils works really well here because it lends a little bit of a beer “tang” to the bread without overpowering the flavor of the cheese. Philip doesn’t really drink a lot of lagers or pilsners (and you guys know I really don’t drink a lot of beer at all), but they really are perfect in this application.

3) Sour cream and Butter
The sour cream and butter up the moisture factor (but if you are out of sour cream, you can use Greek yogurt too). Full-fat will definitely lend the best texture and flavor.

I took a loaf of this into the shop and got rave reviews – including one guy who told me that it was the best bread he had ever had (I am not joking) and another who told me that it tasted like a Cheez-It, which is one of the best comparisons that you could possibly make in my book (I??Cheez-Its). Trust me, you want to make this bread (and it comes together in just about 15 minutes, so you really have no excuses).