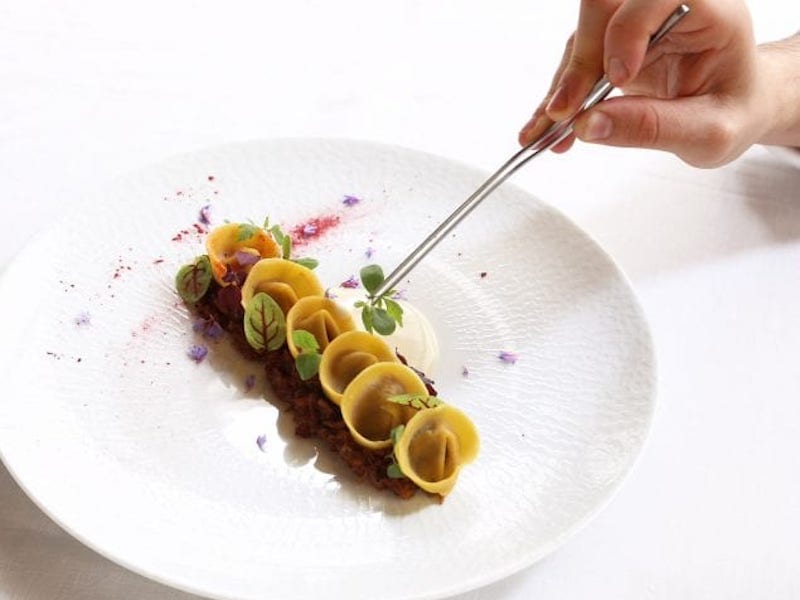 It’s fall in Milan. Good food means root vegetables, sweet onions, heavier pasta and a bit of meat with a depth of flavor created by cooking for many hours over low heat, like this recipe for Cappelletti and Pork Ribs.

One of my favorite cities in the world is also the home of the magnificent Four Seasons Hotel Milano, in Italy. I think one of the reasons that this property so special is their location in the heart of the modern Milan fashion district, and the classical Italian Renaissance architecture of the hotel, as it was once a 15th century convent. The Four Seasons Hotel Milano retains much of the charm of the historic architecture, resplendent with covered outdoor galleries framing a serene interior garden that offers delights in all seasons to the guests, especially those who dine at the signature restaurant here called La Veranda.  And one of the most delicious dishes for fall is this Cappelletti and Pork Ribs recipe from Four Seasons Milano’s La Veranda restaurant.

La Veranda is a cool space with sleek decor. Windows rise up about two stories and here it’s all about the natural light and garden views in the daytime, and twinkling lights and romantic shadows at night. I have very few requests of a restaurant, but they are non-negotiable for me to enjoy my experience there.  Graceful, seamless service, an excellent cellar represented by a knowledgeable sommelier who just might have an adventurous side, and certainly the freshest of ingredients based on the seasons, skillfully prepared by the deft hand of an artist who lets the ingredients speak. On these touch-points, La Veranda delivers with aplomb.

It’s fall now in Milan, a time when heartier fare is what’s called for. Root vegetables, sweet onions, heavier pasta and a bit of meat with a depth of flavor created by cooking for many hours over low heat. This recipe was graciously shared by the La Veranda kitchen for you, our dear readers and cooks. It does take a bit of planning and work to create but the results are more than the sum of its parts. Save this one to create on a drizzly Sunday with a loved one. Pair with a  Brunello like the Altesino Brunello di Montalcino Riserva 2012, or the Sangiovese Tenute Silvio Nardi Brunello di Montalcino 2011 which is great with pork.

Notes: The recipe was sent to me using gram weight measurements. I have converted it for our American measurement system as close as possible. You may not be able to find Provola Cheese so you can substitute smoked provolone. As for the Semola flour, you may use a fine grind of semolina. Also the “00” flour is an Italian milled flour for pasta also called Doppio Zero. It is not Semolina but a fine milled flour. The “00 flour” is not hard to find. 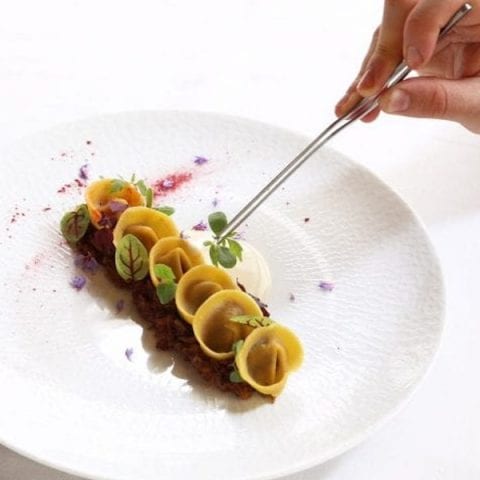 Four Seasons Hotel Milano's La Veranda Restaurant
It’s fall now in Milan, a time when heartier fare is what’s called for. Root vegetables, sweet onions, heavier pasta and a bit of meat with a depth of flavor created by cooking for many hours over low heat. Save this one to create on a drizzly Sunday with a loved one. Pair with a Brunello.
Print Recipe Pin Recipe
Course Entree
Cuisine Genovese
Servings 4 serve