A rich, lavish take on pizza made with brie cheese, caramelized onions and slivered almonds.
By Erica Scime 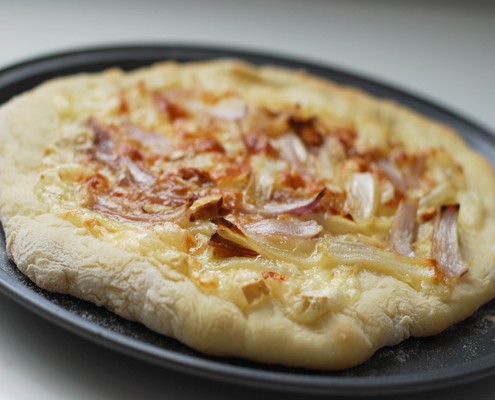 I just can’t get enough brie cheese. Spread roughly onto a piece of crusty bread at a picnic, baked and slathered with cranberry sauce at my boyfriend’s house on a cool, fall evening or tucked into a grilled cheese sandwich with a few slices of apple – there are so many ways to enjoy brie!But one of the best ways that I have ever enjoyed brie is on top of a slice of pizza, melted until it is as rich and creamy as only brie can be.

The other day, I indulged in a brie pizza of my own with caramelized onions for a bit of sweet and slivered almonds for a bit of crunch. The end result was so elegant. With a glass of white wine, this brie pizza was the perfect way to unwind after a long, long week.