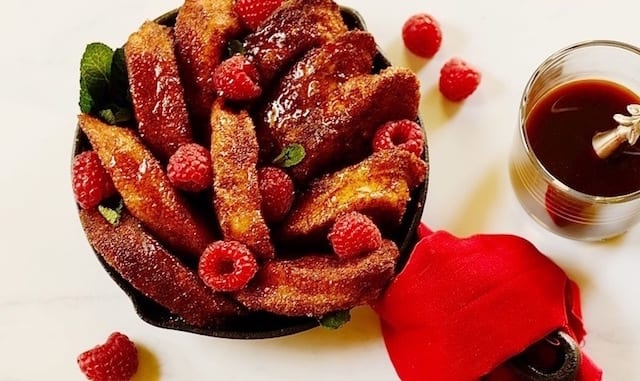 The Perfect Wines for the NFL Playoffs

Also known as rabanada, Brazilian French toast has more of a custard flavor than standard French toast and is sprinkled with sweet cinnamon sugar.
By Denise Browning 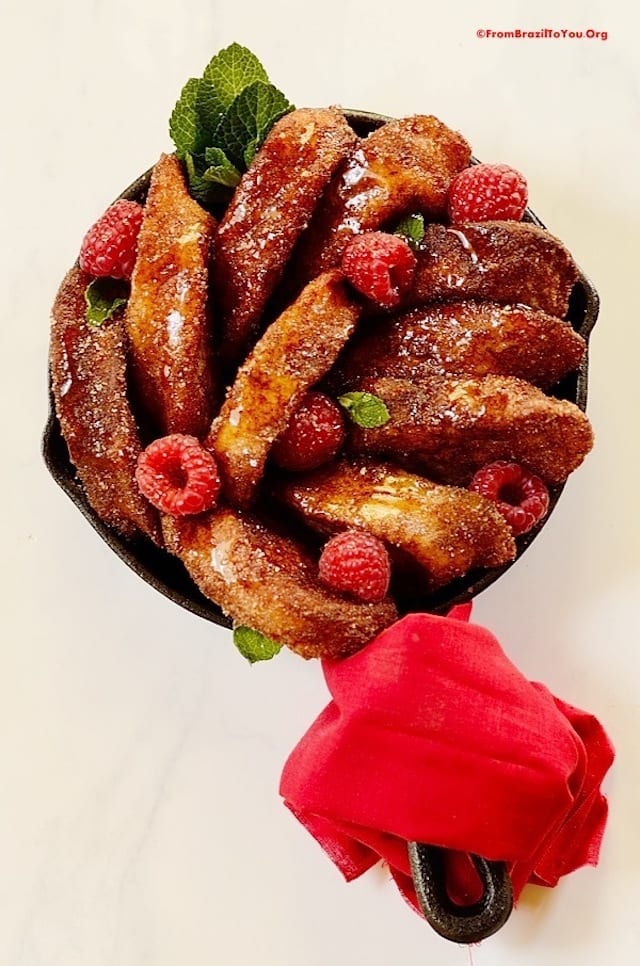 What’s so special about Brazilian French toast? Well, it’s small and thick, round or oval, custardy inside, and crunchy on the outside. It is simple and so comforting.

Brazilian French Toast (or rabanada, as it’s known in Brazil) is different from its cousin, American French toast. How so? Well to start, the bread used to make Brazilian French toast has to be stale, usually has either a round or oval shape, and is cut thick. The way it is prepared is also different! Bread slices are first soaked in milk (or in a milk mixture) and then coated with beaten eggs, fried in oil, and then sprinkled with a sugar cinnamon mixture — instead of being briefly soaked in a milk-egg mixture and cooked in sizzling melted butter, as the standard American French toast is. The result? The Brazilian French toast is much custardier inside, crunchier outside, and overall sweeter than its American counterpart.

Its sweetness may explain why it is served as a dessert or an afternoon snack instead of for breakfast. If you have never tried this, now is your chance! Your simple ingredients — a French baguette or other round/oval bread, milk, sugar, cinnamon, eggs, and oil — are available pretty much in any corner of the world. 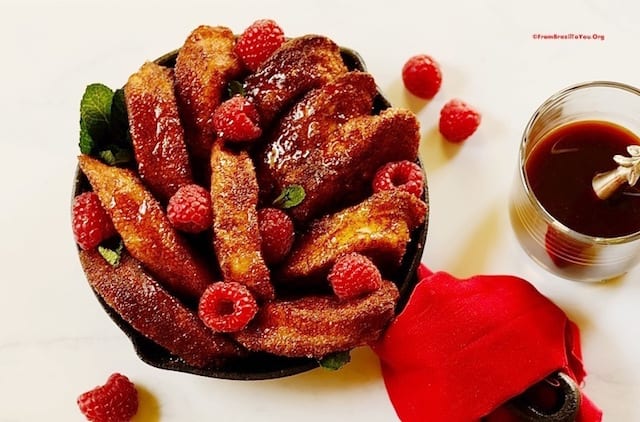 Rabanada makes its first documented appearance in the 15th century, as mentioned by Juan del Encina: ‘…honey and lots of eggs to make rabanadas…‘ evidently referenced as a dish helpful for recovery from childbirth. This is why it is also known as fatia parida or fatia-de-parida (i.e. slices for the new mom).

The first recipes trace back to the cookbook of Hernández de Maceras (from 1607) and the “Arte de cozina, pastelería, vizcochería y conservería” by Francisco Martínez Motiño (from 1611). By the beginning of the twentieth century rabanada was very common in the taverns of Madrid where it was served with jugs of wine.

From Spain to Portugal… and then from Portugal to Brazil, which was of course once its main colony. You may see some designate this treat as Portuguese French Toast while others, like us, designate it as Brazilian French Toast. Although the Portuguese and Brazilian preparation are essentially the same, there are some variations in the ingredients. In Portugal, their French toast is soaked in milk (flavored with spices and/or orange or lemon zest), wine (Minho province uses vinho verde, red or white), or a sugar syrup. In contrast, Brazilian rabanada is often soaked in either plain milk or a mixture usually made from milk, sugar, and vanilla. 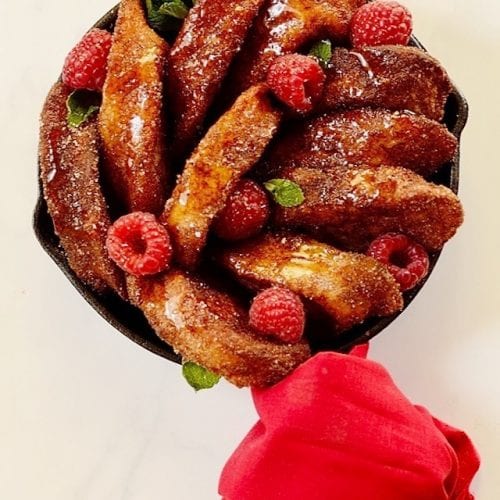 NOTE: Cook in batches and do not overcrowd the pan! You may have to lower the heat a bit for the next batches or cook slices in less time since temperature will be higher.
INACTIVE TIME: 20 minutes