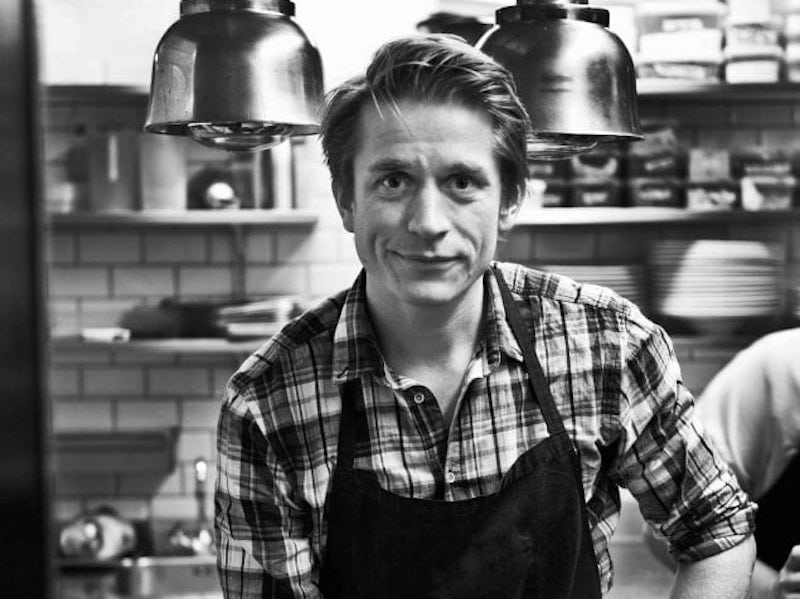 Barely has the dust settled on the latest addition to the growing Aamann-enterprise before the food trendsetter is taking on a whole new project. This time the king of smørrebrød steps out of his comfort zone and into the constant evolving field of Nordic dinner cuisine, as he reinvents the Danish inn-food classics that have been a steady part of Danish culture for decades – in some cases centuries. It’s less than a year since his latest restaurant, Aamanns 1921, opened its doors and introduced Danish and international foodies to a high class, modern and reinvented Danish smørrebrød, yet Adam is already ready to embark on his latest quest.

“Over the last year I’ve worked very hard to get where we are now with 1921, and we are at such a good place, that I thought it was about time to shift my focus towards Aamanns Etablissement and reinvent our style there”, Adam explains.

Technically Etablissement (Danish for Establishment) is not a new kid on the block. This popular eatery has been serving patrons since 2011, offering a more relaxed bodega-like feel, while still keeping the quality high and the prices low. But as Danish cuisine starts to attract more and more attention from international foodies and the media, it felt like the perfect time for a reinvention.

Reinventing Danish dinner dishes is however not completely untread territory for Adam. At 1921 they also offer classic Danish dishes with a twist, but the new menu at Etablissement will still be completely different.

“We are taking the word “reinvention” way more literal at Etablissement. Sure, at 1921 we do stay true to the Danish kitchen, but the menu there is based more on drawing inspiration from the Danish kitchen. It’s more about recognizable ingredients and available produce of the season. Inspiration is more the keyword there, whereas at the Etablissement it’s more focused on well-known classic inn-dishes that we make a modern interpretation of”, Adam says and further explains how this idea came about.

“To be honest, I never quite thought the Danish dinner cuisine was all that interesting and I often grow tired of those classic Danish dishes like stegt flæsk med persillesovs (loosely translated into grilled pork belly with parsley sauce). These dishes are easy to make and you only come across them at bodega-style eateries or places that purposely have a retro menu. But now we want to take this part of the Danish heritage seriously and modernize them into 2018”.

It’s not about rewriting history

Some dishes, like the aforementioned stegt flæsk med persillesovs, dates back as early as the 1890s and have been a big part of Danish food history and since 2014 it is the official national dish of Denmark. So if as the old saying goes “if it ain’t broke, don’t fix it”, is messing with these classic dishes going to be a recipe for disaster? For Adam it’s more about how you choose to interpret them.

“It’s for the same reason we chose to reinvent the smørrebrød. These meals stem from a time, where we had completely different needs and our taste buds weren’t as sophisticated as they are now. Back then we ate as a means to a physical need, whereas now we expect a bit more from what we put in our bodies. So as our taste evolves, the food needs to evolve as well. It’s not about rewriting history, but more about a way to make sure that this history is being curated into our future.”

A quick glance at the menu instantly shows us how Adam puts his words in to action. The 12 courses are instantly recognizable and the revamps are subtle yet clever. The cauliflower gratin seems more layered with the addition of fresh truffle and matured cheese, while the classic Danish hash gets a French twist with the addition of a béarnaise crème. Others, like the pork loin sandwich, takes advantage of the rich Danish agriculture by adding rhubarb to the beloved recipe.

Adam does however point out, that he wholeheartedly agrees that the classic versions are pinnacles of Danish culture, and there is nothing wrong with them per say. Several popular Danish eateries have enjoyed great success in catering to the masses that take great joy in eating the inn classics unadultarated. Adam is simply looking to inject some diversity in the way we perceive and experience these classics.

“I think it’s great we have restaurants who are remaining true to the original form of these dishes, but that is not what Aamanns is about, but it’s great to have both sides of the spectrum. To compare it to smørrebrød again, then there is absolutely nothing wrong with the classic version, but for me as a chef I would like to take these things and create new experiences, that aren’t predictable. A surprise in your mouth if you will. The majority of our guests are also people who know of these classic dishes, but need to experience another version of them.”

As our pallets evolve, so do our expectations. One thing most classic inn-dishes are known for is the excessive use of carbs, butter and fat. Back in the olden days, before Instagram and Atkins diet, these dishes served their main purpose – they kept you fed for a reasonable price. But in the social media age we have high expectations to both what we put in our bodies as well as on our news feed. But can you update these dishes without them losing too much of their DNA?

“Thinking healthy has really never been my starting point for anything. For me it’s about finding the right balance between the ingredients and perfecting the taste of the combination of what you get on your plate. All homemade food is in itself healthy, so finding the perfect taste combinations and making it a bit lighter, makes the food healthier in the end. But it’s never the first thing on my mind when I start brainstorming new recipes”.

Adam said that creating this menu was a bigger challenge than reinventing the smørrebrød. Whereas there are almost an unlimited number of smørrebrød variations, these inn-classics are more defined and with very limited variation, which makes it that much harder to perfect.

“With these dishes the trick is being careful not to change too much about it and inventing something new. That goes against the whole concept of these being classics. That’s also why it’s more nerve-wracking to see how people – especially outside of Denmark – welcome these. With smørrebrød there will always be some variations that you would love – it’s kind of our version of sushi or pizza. Whereas these classics have this old Danish feel to it, that might be hard for foreigners to understand”.

If you are curious to sink your teeth into one of Aamann’s creations, but worried it’ll set you back a month’s rent, you don’t have to worry. The 12 dishes cost between $12-$20 and are all suitable for sharing, with Adam recommending 3 per person. For roughly $45 each you can also opt for the chef’s menu and let the staff make the choices for you. While you wait soak in the atmosphere that is specially selected by Adam and his interior designer friend Anders.

The restaurant, which seats 38, stays true to the original bodega-style venue and has walls covered with 8 different classic wallpapers. Small lamps are set on each table, and everywhere you look you’ll find old pieces of art and weird lithography that Adam has personally picked up during his many travels. Along with the updated interior and menu, an array of new schnapps have been created to go along with the modernized menu as well as a home-brewed IPA beer and grapefruit-infused gin. The icing on the cake however is the music.

“I tried to find a balance between typical bodega atmosphere but with a personal twist of mine. The common thread is that everything is a representation of what I like personally. That also comes to show with the music where we have an old school gramophone to play all the music, and I brought a selection of my home collection of vinyls, and the guests are more than welcome to come up and browse through the albums and put on the music of their choice. I really want to keep the atmosphere very homey and welcoming”, Adam explains.

Last time we spoke to Adam about his reinvention of smørrebrød, our final question was, what smørrebrød he would serve to a significant person from outside of Denmark, as a cultural representation of him and his restaurant. It only seemed very appropriate to ask the same question, but with the classic inn-dishes.

“I would serve them the cauliflower gratin and the Danish hash. The former because it is mildly based on a French soufflé. The latter because every country has their own version of a dish with meat and potatoes. Our version has a really great balance – especially with the pickled beetroots. And also because both of them taste f***ing good!”