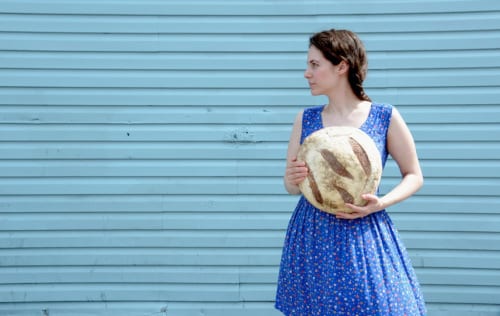 Meet Marie Constantinesco, the filmmaker behind My Life in Sourdough, a mini-series about the culinary and romantic adventures of a French girl living in New York.
By Carly DeFilippo

In the world of “food television”, there’s not much I like to watch. I’m easily bored by cooking shows, get aggravated by nearly all reality television (thought I did have my Top Chef moment), and am wholly persuaded by Michael Pollan’s observation that more time spent watching food TV inversely correlates with more time in the kitchen (not to mention general culinary proficiency).

But I am an avid fan of culinary cinema, works that seek to tell a story beyond who can quickly bang out canapés for 500 guests and actually delve into the story behind the food—see Hiro Dreams of Sushi, Toast, or Kings of Pastry. That said, I don’t often have the time to watch a two hour film, and wish there were more short-form cinematic food programs.

Enter My Life In Sourdough , a just-launched cooking show by filmmaker Marie Constantinesco, a French transplant and baking aficionado living in Brooklyn. Admittedly, if there was an equation for things that are likely to please me, Food + French + NYC would be a pretty good bet. But there’s an elegance and quirky honesty to Marie’s work that speaks to both an intelligent, subtle French sense of humor (that I very much appreciate) and the wondrous absurdity of being young today in Brooklyn.

I had the pleasure to meet with Marie and speak about the series, her own experience with cooking and the differences between home-cooking culture in New York and France:

What inspired the series, and how did it come to be?
My Life In Sourdough was inspired by my love for food and film. I wanted to do a new kind of cooking show involving a narrative and decided to tell the story of a girl looking for food and for love in NY. Food was going to be the link between the characters. The series was developed as an independent study at NYU (I’m a thesis student in the Graduate Film Program) and we started shooting the series with a really small budget and a tiny crew of very talented fellow filmmakers. 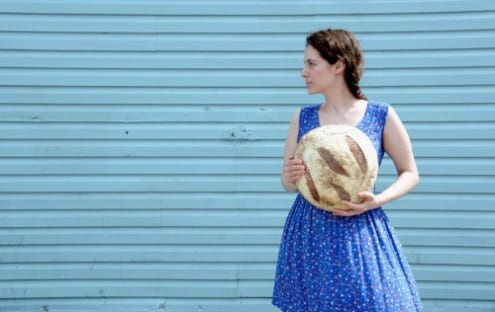 Is this your first foray into the food world?
Prior to the series, I had already been playing with food themes in previous short films (Too much strawberry jam, which involved an intense making out/bread kneading session) and I have been shooting food and blogging about food for a while—but food was never really the sole focus. So yes, the series is my first real food world adventure.

Any particular funny/interesting stories about the production of the series?
There are a few! From shooting at 6 am in Choice Green in torrential rain (It was literally raining in the store and, if you look close enough, you can actually see the rain in the scene with the made-from-scratch guy!), to feeding the crew prop food to save money (we used the pasta we made in the scene for lunch!).For episode 4, we also needed one shot in the waiting room of an ER. I scouted a grungy hospital, but there was a lot of security and I thought we would never get away with shooting there without permission. On the day of, we went in with a tiny camera. We sat down quietly, I hid the microphone in my handbag and we stole the shot in less than 10 minutes. The security guards couldn’t care less.

What’s already in store for the future of the show/where would you like to see it go?
I’m planning on shooting another season in the fall in NY – it’s my favorite season on this side of the Atlantic and I can’t wait to shoot in corn fields and apple orchards. A season in Paris is also on my mind. Eventually I would love to develop the series in a longer format. I’m currently looking for producers and investors.

Are there any food films/series that you particularly like and respect?
I love In the Mood for Love, which is not a food film per se, but I particularly like the slow motion scenes where Maggie Cheung goes down the stairs to buy her daily dose of noodles. The sensual atmosphere that comes with slow motion was an inspiration for the food videos of My Life in Sourdough, shot by Chananun Chotrungroj who brought her great sense of framing and aesthetics to the series.I also really like Rachel Khoo’s BBC series, and while not a film, Clotilde Dusoulier’s series on French food idioms is quite fascinating!

When and how did you start baking?
I started baking and cooking fairly young, watching my parents cook. My Romanian grandmother was also a serious baker, and I would make hundreds of biscuits with her every Christmas. My first cookbook was called La cuisine sans maman (“Cooking without mum”), but my first cooking endeavors quickly became family gatherings over mini-disasters. I once attempted to make some powered sugar and mint syrup candy balls that would refuse to come into shape. My mum invited along the postman to help out, and the green liquid paste magically turned into candy—but they tasted horrible.
The kitchen has always been a place of exploration for me. It’s the place where I go when I’m down, and I’ll make a rhubarb jam to cheer me up. The place I like to invite friends—to cook with me or eat the new cheesecake I’ve just made. It’s also the place where I can close the door, turn on the radio, and create something. I also love how you know very quickly when it’s working or when it’s a fail, and sometimes I wish making films would resemble that process. 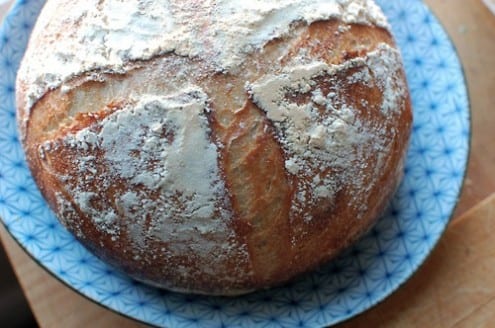 How would you compare home cooking culture in France vs. New York?
Typically in NY people have less time—they drink or eat their breakfast on the street, and tend to eat out or do take out for dinner. The tradition of home-cooked meals is not as rooted as in France, but it’s changing, as there is a growing movement towards home-cooking in NY, and farmer’s markets are becoming more and more popular.In France, where a croissant used to be the only thing that was acceptably eaten on-the-go, people now tend to devote less time to eating lunch. For instance, the two hour lunch break has often been reduced to one hour, hence more and more sandwiches eaten on the street. However, it seems that the tradition of family dinners remains somewhat unshaken, even though the communal table is often facing a television.

Eventually, the main difference is that in France, people are so obsessed by food that they can’t stop talking about it. Even in a “non-foodie” family, it’s not rare for a dinner conversation to focus exclusively around food. Reminiscing over extraordinary food experiences makes the best dinner conversation!