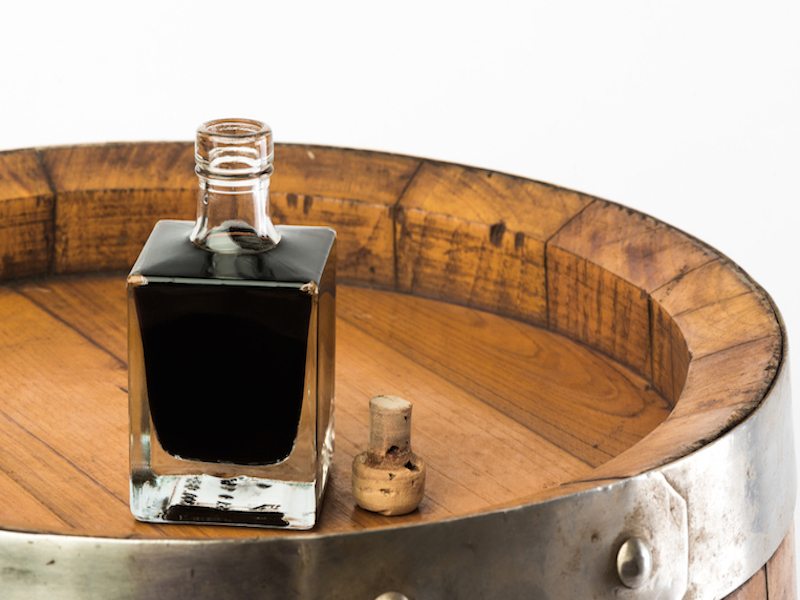 Wine vinegar (Aceto di vino) is one of the condiments of excellence in the Italian cuisine. After the fermentation and aging of the wine and vinegar, you get the Balsamic Vinegar of Modena, a typical product of Modena and Reggio Emilia (Northern Italy).

Modena and Reggio Emilia are the designated areas that have a summer that is favorable with warm and wet climate and cold winters, characterized on their Lambrusco, Trebbiano and Ancellotta vines. The origins of balsamico are ancient and date back to Julius Caesar, who indicated balsamico as medicinal disinfectant of the digestive system.

The luck of balsamico began in the Renaissance and is linked to the noble family of Este who ruled Ferrara from the thirteenth century until 1598. In that year, the Este family were forced to leave the city and move the family into Modena, the new capital of the Duchy. The passion of the Este for vinegars began in 1556 when, at the court of Ferrara, there were listed four types of vinegar. However, it was only from 1598, the year of the move to Modena, that the testimony relates to products closer to the Modena balsamico. Finally, in 1747 there was the first official testimony on the appearance of the adjective “balsamic”. On this term there have been many reflections. The “balms” are particularly odorous substances, can provide relief and comfort to soothe the pain. The therapeutic and digestive properties of vinegar were known for centuries. The combination of “balsamic” in reference to the vinegar seems to indicate the pleasantness, subtlety and fine fragrances and flavors. The adjective was judged appropriate so that in a list of the various types of vinegar in the court of the Este in 1830, we find the specification of four qualities: the “balsamic”; “semibalsamic”; the “up” and “common”.
The story of balsamic does not end between the aristocratic courts but becomes the story of many Modena families which, for centuries, in their small acetaie have passed down recipes from generation to generation. The recipes are often jealously guarded and customized. In that period, there was a remarkable proliferation of “balsamic” vinegars, the number of which was at least equal to that of their producers.

In 1796, Duke Ercole III d’Este was deposed by Napoleon Bonaparte and had to flee from Modena, bringing all the barrels and bottles. In this way, it was over, the story of Ducale Balsamic.

But some families in Modena continued to pass on this heritage and made it the pride of the land. In fact, the balsamico each family made was generally not sold. Each family produced it and treasured it in their barrels and then donate them to precious people or used it to enrich the dowry of their daughters.

Traditional Balsamic Vinegar of Modena is born and grows in the quiet of acetaie, through the technique of pouring, which requires many years of aging and aging. In this way, you get two balsamic qualities: the “classic” (12 years of age) and ‘”extra old” (over 25 years).

The raw material for the Traditional Balsamic Vinegar of Modena, following the rules of production, is produced from grapes grown in the province of Modena, Trebbiano.

The steps necessary to obtain the Traditional Balsamic Vinegar of Modena passes through four basic steps: collection of grapes; crushing; the cooking of the wort (cottura del mosto) and aging. The phase of aging is the most delicate and personal, made following scrupulously certain rules, most often passed down orally from generation to generation. With aging, and by decanting in different wood barrels that make up the batteries of a vinegar, traditional balsamic vinegar of Modena, in the process of maturation, takes on characters of roundness and balance, increasing the amount of residues and sugar, while maintaining the constant acidity.

Dark in color, with the traditional sweet and sour taste, Balsamico is used on fresh and boiled vegetables, meat, as a base for sauces, to finish preparations of meat and fish, strawberries, ice cream, mozzarella and other dishes where imagination requires it.

DOP (Protected Designation of Origin) is a reward for producers and certainty for the consumer that they are buying an unaltered culture, tradition and quality of a product that is unique and its scents and flavors are sure to be enjoyed.