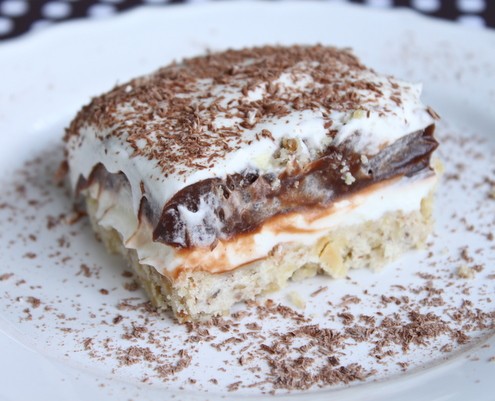 Kelsey Hilts with the recipe that made her husband shout the above out with joy.
Text And Photo By Kelsey Hilts

The first time that my husband spent Thanksgiving with my family we were all gathered around the table after dinner and my Aunt pulled out a pan of a layered pudding dessert. My husband exclaimed, “The Next Best Thing to Robert Redford! This was my favorite growing up!” We all started laughing because we only knew it as the layered pudding dessert. Not to mention that it was especially funny coming from my husband. A quick search on Google, however, revealed that my husband wasn’t nuts. There is actually a dessert with this name.

So here it is. The recipe that my husband grew up on. This rich, creamy and chocolaty dessert definitely isn’t for the weak. A little bit of the buttery cookie crust topped with vanilla-chocolate pudding and whipped cream goes a long way. The dessert is a crowd-pleaser and it’s simple to make, so it’s great for parties and potlucks. The original recipe calls for frozen whipped topping but I couldn’t resist using homemade whipped cream.

4.5 from 2 reviews
The Next Best Thing to Robert Redford