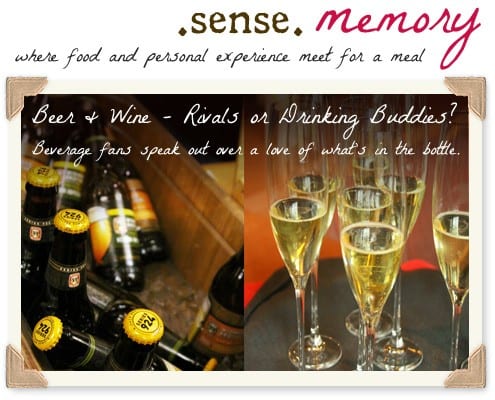 Wine and beer. Some people drink both without much preference, but many prefer one over the other, like the never ending Cold War between cat and dog owners.
By Denise Sakaki

I was at one of my favorite microbrewery taprooms having a frosty beverage. The beer was especially refreshing on a humid summer day and there was a great taco truck parked outside, the perfect accompaniment to a crisp, hoppy IPA. I texted a friend to see if she wanted to join the informal gathering of myself, the Mister, and a burrito the size of my head. The thing is, my friend doesn’t drink beer – it’s wine or nothing. She should have a tattoo that says, “If it’s not from the vine, it ain’t mine.” I made sure to include the crucial, “They have wine here,” on my text. I received a quickly-messaged response: “I’m on my way.”

Wine and beer. Some people drink both without much preference, but many prefer one over the other, like the never ending Cold War between cat and dog owners.  Both industries are powerful forces in the retail world – beer sales of macro brews like Budweiser and Heineken range from $6 to $8 billion per year, and while wine doesn’t have as high of a volume, US wineries in 2010 were showing total direct sales numbers of $3.4 billion, and growth numbers increasing with projections of double-digit jumps with each year. The numbers show Americans like to tie one on, but they don’t reveal why we drink what we drink.  I can admit that I’ve uncorked a bottle of wine because it’s an easy and delicious thing to sip at a party, plus it just feels more celebratory with a wine glass in hand. Linda Miller Nicholson, the writer behind the blog Salty Seattle jokes, “I don’t like to waste my time with any beverage below 12% alcohol or any food below 12% fat, so most beers are simply out for me. Unless they made butter beer, then I could bend the rules a little.” While there’s no correct answer to wine versus beer, it’s an interesting preference to explore, to see what drives the specific love of what’s in the glass.

Team Beer was holding court at the 34th Annual American Homebrewers Association National Homebrewers Conference held just outside of Seattle, Washington.  Comments included, “Give me Beer, or give me Death!” when asked what ultimately quenches one’s thirst. But the conference wasn’t just about drinking beer until you hit the floor, there were beer judges and experts to give talks and celebrate beer’s unique qualities, and why it’s not just yellow fizzy water. “Follow your tastebuds, not the pack,” advised Ted Hausotter, Beer Judge Certification Program (BJCP) Grand Master Level 2 Judge, to a crowd of a few hundred listening to him explain the fine art of drinking versus tasting beer. Hausotter brought up the point that mass market beers, much like any product, doesn’t necessarily guarantee quality flavors; it’s the smaller, artisanal beers that are what’s interesting. The merits of beer were highlighted in the fact that they can be brewed with a variety of ingredients, such as cardamom, dried jasmine or orange peel. Beer judge and BJCP instructor Steve Antoch explained why he preferred beer, “Beer is more complex…more ingredients lead to more layers of flavor.”  The wider spectrum of ingredients, combined with different strains of yeast create beers that range from smoky sweetness to tart, citrus notes.  Wine aficionado, Jameson Fink, author of wine blog Wine Without Worry, salutes the craft beer movement, “Now there are so many incredible microbrews available as well as great Belgian beers. It’s also cool to see brewers using wine barrels and other tools of the wine trade, bringing the two worlds together. Beer is a much more complex, fascinating world that it was twenty years ago. I love the creative spirit of the beer industry; it seems to be fueled by fun and crazy experimentation.”

Meanwhile, an enthusiastic wine crowd was raising a glass at Pour, an annual wine event hosted by the restaurant El Gaucho, in Bellevue, Washington, showcasing over twenty different wines, primarily from the Pacific Northwest region. While beer fans were citing ingredients and their complex flavors, wine drinkers were romantics at heart. “Wine has a sense of place,” one rep from Abeja Wines said. He went on to describe how wine was a coupling of the grape, the vine, and the earth that grew it. Wine was poetry. While I sipped my poetic wine and felt my cheeks get rosy, the ladies at my table all agreed that wine was more of an experience than what was simply in a glass – it was beauty, a reason to wear something special and gather with favorite friends.

There is no right or wrong when it comes to wine and beer.  More often than not, people answered, “Both” when given the choice. Regardless of where one stands on the beverage spectrum, Wine Without Worry’s Jameson Fink says it best, “I think context informs the enjoyment of beer and wine to a great degree. It’s the people I’m with and the experience surrounding the bottle that completes the picture.” He went on to add, “And if there is a beer versus wine mentality, the easiest way to debunk that is to look inside the fridge of any winemaker; it’s probably full of beer. As they say, it takes a lot of beer to make good wine.”