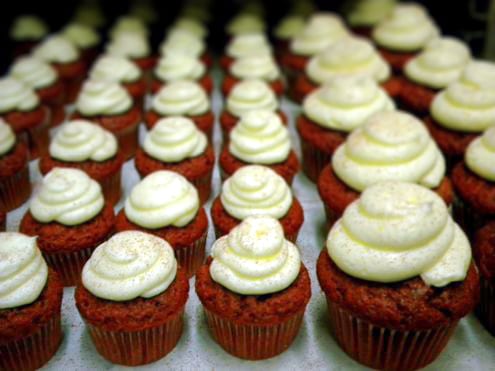 A blue chocolate chip cookie would be suspect and a magenta crème brulée might raise a few eyebrows, but somehow bright red cake slipped under the radar. Somehow, this sanguine stuff has become the popular norm. Everywhere, as we speak, bakers are dumping entire bottles of food dye into chocolate cake. Why?  What is appetizing about eating a blood-red colored cake? When did we loose sight that this behavior is objectively bizarre? Where did all the insanity begin?

Well, the question of human folly is not easily answered. Apparently, neither is the origin of the red velvet cake.

Although, there are several conflicting theories, the most common is that “Devil’s Food,” and red velvet cake once referred to the same thing. Before cocoa powder was “dutched,” (A chemical process that neutralizes cocoa powder, which is naturally very acidic, giving it a darker color and more mellow flavor), the acidic cocoa powder reacted chemically with the baking soda to reveal a subtle, naturally red hue in the final product. Today, almost all red velvet recipes contain an acid, such as vinegar or buttermilk, which enhances that red pigment in the cocoa.

Therefore, the “Devil,” in Devil’s Food, did simply refer to the sinful quality of the cake, but at one time, also alluded to the cake’s mysteriously reddish hue. When dutch-processed cocoa powder became more popular, bakers compensated with dye or beet juice, achieving a more exaggerated result.

Some say red velvet cake (as we know it today…with lots of red food dye) was first served at New York’s Waldorf Astoria hotel in the 20’s. Others claim that it has southern roots and its modern-day popularity can be attributed to the 1989 film, “Steel Magnolias,” in which a red velvet armadillo-shaped groom’s cake is served.

One thing is for certain; no matter where red velvet cake came from, or why, today it is everywhere.  Although objectively absurd (and consuming food dye by the cup-full is probably not advisable), red velvet is an admittedly fun cultural phenomenon.