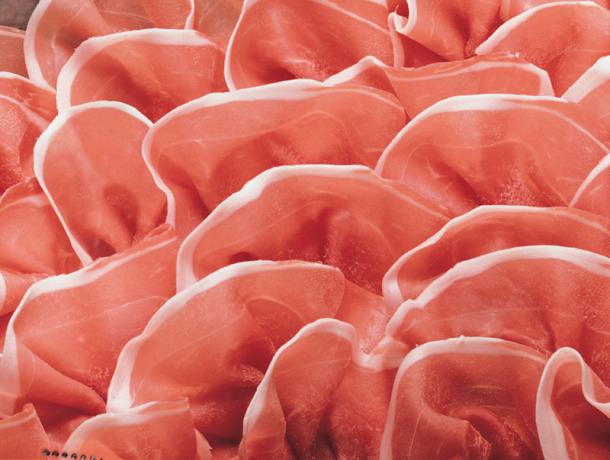 Noah Charney serves up a guide, with tasting notes, to a variety of competitors for the title of best ham slice, knocking on Prosciutto di Parma’s door.
By Noah Charney 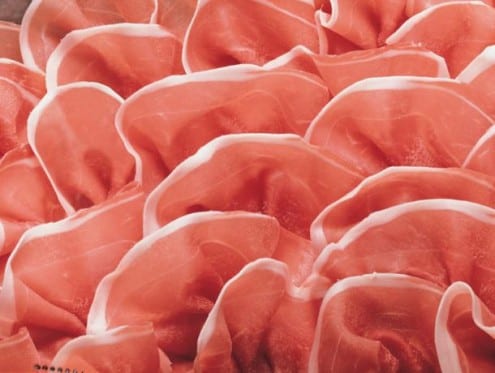 You could be forgiven for being a bit fuzzy on the different between jamon, prsut, speck, prosciutto crudo, prosciutto cotto, pata negra, bacon, and a wash of other terms for delicious, thinly-sliced portions of pigs. The best-known of the bunch is prosciutto di Parma, or Parma ham, which enjoys international recognition for quality and taste. But few could define the difference between, say, Spanish jamon and American bacon, although they taste quite different. What follows is a guide, with tasting notes, to a variety of competitors for the title of best ham slice, knocking on Parma ham’s door.

Jamon
Jamon is simply the Spanish word from “ham,” but it evokes a much more specific product. There are two main types of Spanish jamon, jamon Serrano (from the mountains) and jamn iberico (from the rare Black Iberian pigs, also called pata negra). Spanish pig legs hang to dry for a good deal longer than other types of prosciutto, up to 18 months, and they have a different taste—moister, one might even say sweatier (though I mean that in a good way). In fact, some bars in Spain which feature jamon legs hanging from the ceiling also include what look like white upside-down umbrellas stuck into the flesh beneath them—this catches a “sweat” of moisture that would otherwise drip on unsuspecting customers. Jamon Serrano is the standard style, but you can also find varying price levels of jamon iberico, the best of the bunch being pata negra, or jamon iberico de bellota. Free-range black pigs who only eat acorns produce an otherworldly ham that tastes like it is in a whole new category. And based on the price, it certainly is. It can run up to 30 EUR per 100g, about ten tiems the price of jamon Serrano.

Bacon
Bacon is ubiquitous these days in place that, ten years ago, you wouldn’t have expected it. It makes everything taste better, giving it a smoky, umami crunch that dresses up salads, breakfast plates, and ice cream sundaes alike. Even McDonalds offers sundaes with bacon, demonstrating that exciting uses of bacon has truly gone mainstream. Unlike air-cured jamon and prosciutto, bacon is cured in brine or dry-packed, and it can be either boiled (not quite as tasty) or smoked (extremely tasty). Unlike the other meats described here, bacon is cooked before eating, rendering it crispy. You can get American-style “streaky” bacon, which comes from pork belly, or cut from the side or back, which has more meat and less fat. Fatback is another category that is almost entirely fat—not exactly on most diets, but it sure tastes good.

Speck
The German word for “blubber,” translated into Italian as “lardo,” this is smoked (or sometimes pickled) pork belly, with a higher degree of fat than normal bacon. In fact proper speck can be entirely white with fat, with just a crust of meat. It can be eaten straight if smoked and thin-sliced, or in uncooked cubes it is added for flavor to dishes like Pasta alla Gricia.

Pršut
The Slavic term for prosciutto, this speciality is air-cured by hanging the pork legs in a very special way: so that they are dried by the burja, or bora, a wind that blows from the north-east, and is a part of Balkan culture, from Slovenia to Poland to Turkey, named after the Greek North Wind god, Boreas. It is a cold, dry wind which, according to tradition, imparts and different, and better, flavor to the ham legs it strikes than other winds. In Slovenia, when the wind blows hard across the karstic plains near the Adriatic, it imbues special flavor to the pršut legs that swing in its path.

Prosciutto
The most famous of the thin-sliced pork legs is prosciutto, the generic Italian word for dry-cured ham legs that is served uncooked (although in cooked form, it is called prosciutto cotto). By far the most famous, an international household name, is Prosciutto di Parma, prosciutto from the northern Italian city of Parma (equally well-known for parmigiano, or parmesan, cheese). The mother of dried ham, the name actually comes from the Latin pro (meaning “before”) and exsuctus (the past tense of the verb meaning “to suck out,” as in removing the moisture). Our ancient ancestors realized that meat would keep far longer, and also taste quite nice, if preserved: salted, brined, smoked, or air-dried. This ancient technique features the hind leg of pigs or wild boar, hung up to dry for a period of at least nine months, and as long as two years. Great care must be taken with the process, because keeping the legs in an inappropriate atmosphere will result in their rotting. It cannot be too warm, or the drying process will not begin and the meat simply spoils. You cannot start the prosciutto process in the summer. Too dry is also bad. It should be damp and cool, with a fairly constant wind blowing.

The first step is that the ham leg is cleaned, covered in salt, and left for around two months, to extract some of the liquid. It is then carefully pressed, removing any blood left within the meat. Then it is washed, to remove the salt, and it is finally hung in a dark, ventilated space until it is determined ready. It is served in very thin slices—slicing is an art form.

The prosciutto crudo di Parma has a nuttier flavor than other, the result of whey from the famous Parmigiano Reggiano cheese of the area that is added to the diet of the lucky pigs who will become this world-renowned delicacy.

The bottom line is that smoked or dried pork should be on anyone’s Reasons to Exist list. And a sampling of the various styles of thin-sliced, cured ham leg makes for a great party centerpiece or weekend pastime. Buy 100g of each of the types we’ve listed above, and eat a slice or two of each alone. Though I live in Slovenia, my personal favorite is the prosciutto crudo di Parma—but I’m a great fan of pork tastings, so you can decide on your own this holiday season.