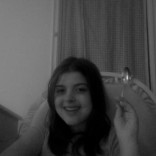 At the age of thirteen, Kelly Morrison founded Foodie Fiasco,…

Agree that this is what you need in your life. And yet it tastes even better than it sounds. I know what you’re thinking… this can’t possibly be healthy!!

I mean LOOK at this. This has to be hyperglycemic shock on a plate?! Wrong! Thankfully. Somehow these brownies manage to be only 67 calories and 2g net carbs each, with 5g protein!

That’s for 1/12th of the pan, by the way. Not the 1/16th of the pan the infamous Ghirardelli tries to sell you for 200 calories and who even knows what additives.

This is healthy recipe alchemy at its finest, my friends. (I love you too.)

While we’re at it, let’s bring some (healthy) ice cream to the party. Because that’s never the wrong answer.

(Except on math tests. Apparently putting ice cream on the test, written and/or literally, was not the correct answer. But from my limited experience as a high school graduate, it seems like those math tests are much less valuable in the real world than these brownies are.) I’ll keep this short and sweet (as opposed to tall dark and handsome like these brownies are), because you’re probably here more for the brownies than my commentary, as charming and witty (and modest) as it may be. Also, as always, you can click on the handy “jump to recipe” button on the top right of each post if you want to skip the talking and get right to the eating. No worries, we’ll still be friends. Using my original brownie recipe as a framework, I subbed applesauce with Nutella and (because that obviously was not enough) added additional Nutella to be swirled into the batter right before baking. Feel free to send me roses. But I accept virtual hugs as well. If the original recipe was the director of a groundbreaking play that indelibly improved the course of low carb brownie kind forever, then this Nutella version is the star, nothing short of a dazzling larger-than-life personality that steals the show every time. 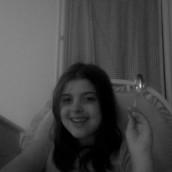 At the age of thirteen, Kelly Morrison founded Foodie Fiasco, a popular healthy recipe website that provides the ultimate guide to having it all: happiness, decadence, and loose pants. Five years later, she currently resides in West Hollywood, CA, where she spends her days developing recipes, photographing food and her cats, and writing bios in the third person.