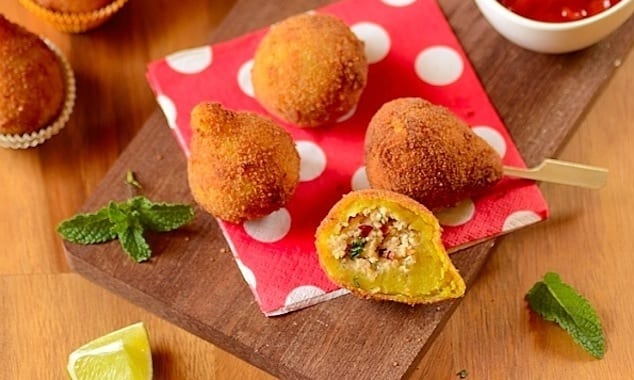 [adrotate banner=”44”] Coxinha de Frango or Brazilian Chicken Fritters, consist of a dough made with wheat flour and chicken broth, which is filled with spiced chicken meat, shaped into a chicken drumstick, and deep-fried. It is one of the most popular appetizers in Brazil, and for good reason.
By Denise Browning 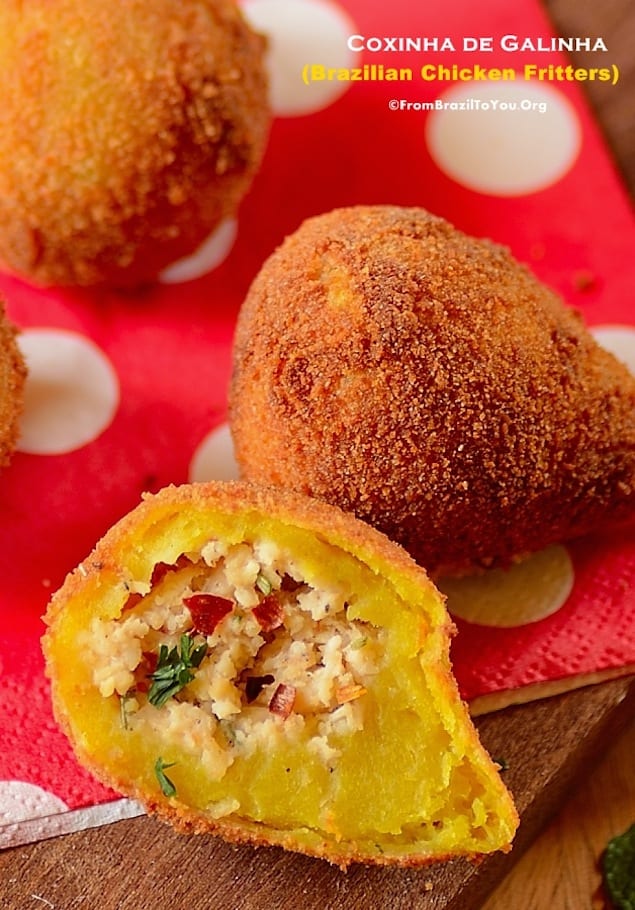 Have you ever heard about, or perhaps even gotten a chance to experience, a coxinha? “Hum? Come again!!!” Coxinha – a “little drumstick” that is actually a fritter molded into a shape resembling a chicken leg… Well, if you haven’t, now is your chance… I would like to introduce to you a favorite of mine, a real star among Brazilian salgados or appetizers: Coxinha de Frango or Brazilian Chicken Fritters!

Coxinha de frango ( pronounced like koh-SHEEN-ya dee FRAHN-goo), also known as coxinha de galinha, originated in São Paulo about 2 centuries ago, having now become one of the most popular appetizers in the country. It consists of dough, originally made with wheat flour and chicken broth, which is filled with seasoned shredded chicken, shaped into a little chicken drumstick, and then deep-fried.

Coxinha de frango is a street food, although common in snack bars, bakeries, and cafés. It is also served at birthday parties and many other events as an appetizer. I have been a fan of coxinha de frango for as long as I can remember, just like everyone else who has taken a bite. The thing is unforgettable!

Well, as if this weren’t enough, I am pairing this savory beauty with another star: Rioja Wine, of course! 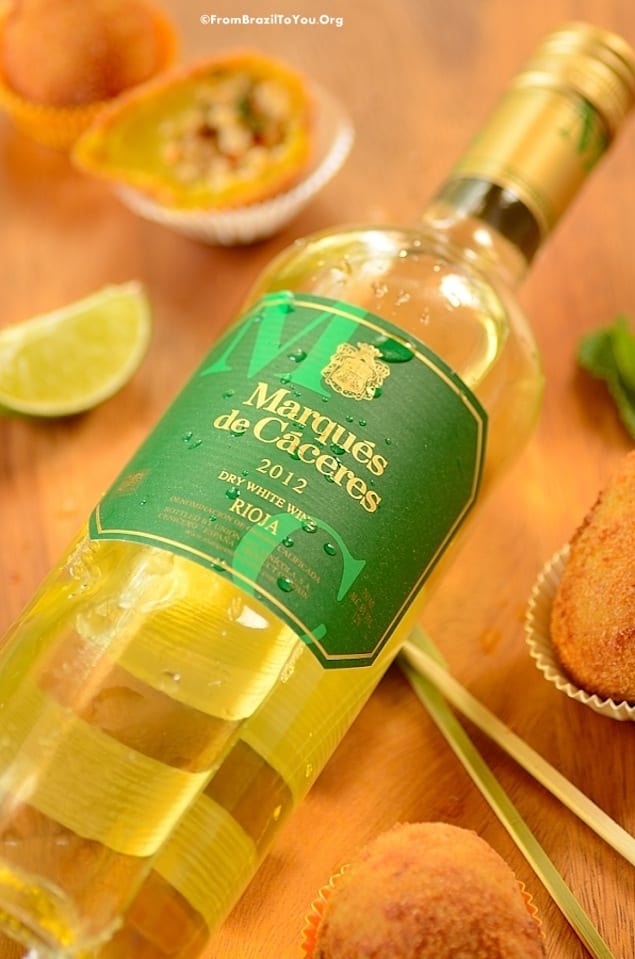 I know, I know… Rioja wine is not from Brazil (unfortunately)! But it doesn’t have to be in order to pair well with coxinha de frango, our Brazilian tapas this time around. In fact, Rioja wine is so food-friendly that can perfectly complement a huge range of dishes from different cuisines — not just those from Spain and other Mediterranean countries. If you didn’t know, Rioja reds, whites, and rosés are beautifully balanced in their alcohol content and acidity — complementing everything from fish to veggies, meats, and cheeses… most of the time without you even having to order different wines. How about that?!
Rioja wines are also “aged for you”! This means that Rioja winemakers age the wine for you in their cellars. When you pick up a bottle of Rioja, you can be sure it will taste great right away.

2012 Marqués de Cáceres is a dry, crisp, clean, and citrusy white wine from Rioha Alta, Spain. It goes well with our Brazilian tapas for at least 3 reasons:

1. Its clean acidity complements chicken, seafood, pastas, rice, hors d’óeuvres, sushi, fresh salads, etc.
2. This Rioja has both a long length, and lasting flavors that are not carried away by the intensity of garlic and spices in our coxinhas or chicken fritters.
3. This is a light wine that contrasts well with our heavy (fried) Brazilian tapas dish. Yes, its acidity cuts through the fat in fried foods! 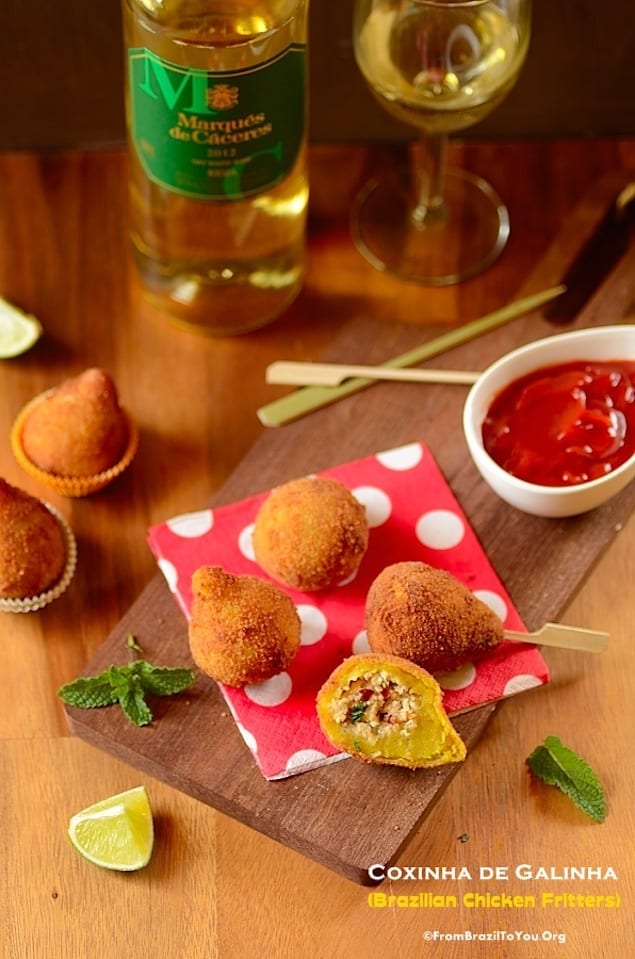 A Match Made in Heaven — Brazilian Chicken Fritters

Print
Prep Time
60 mins
Cook Time
35 mins
Total Time
1 hour 35 mins
Coxinha de Frango or Brazilian Chicken Fritters, consist of a dough made with wheat flour and chicken broth, which is filled with spiced chicken meat, shaped into a chicken drumstick, and deep-fried. It is one of the most popular appetizers in Brazil, and for good reason.
Author: Denise Browning
Recipe Type: Appetizer
Cuisine: Brazilian
Serves: 34
Ingredients
For the coxinha filling
For the coxinha dough
For dredging
Instructions
Prepare the filling:
Prepare the coxinha dough:
3.2.1275