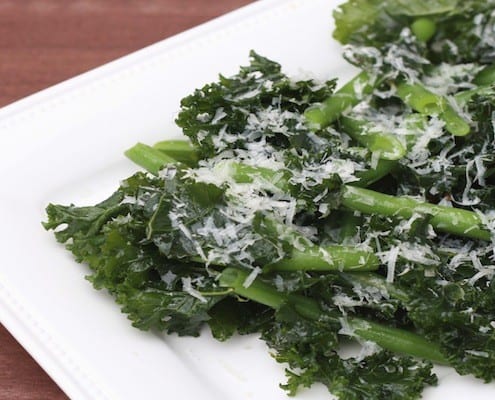 On the rare occasion that I get my nails done, I love to take advantage of the stacks of magazines sitting there. I use the 30 minutes during my pedicure to flip through as many trashy magazines as possible. On my most recent trip to the nail salon, I was pleasantly surprised to see the July issue of Bon Appetit, one of the few food magazines I don’t subscribe to. Us Weekly was quickly tossed aside. When I flipped to the page featuring Marinated Kale and Green Bean Salad, I knew I had to make this recipe, and soon. You’re not going to judge me when I admit I ripped the recipe out of the magazine, are you? Does it help that I gave an extra big tip? It turns out, kale makes me do crazy things!

Whatever sin I committed by taking the recipe with me was well worth it. I know it comes as no surprise to you that I was a fan, I’m always trying to shove kale in your face on this site, aren’t I? The other time I made a salad with raw kale (also from Bon Appetit, and featuring brussels sprouts, another vegetable love!), the kale wasn’t required to sit and marinate. This one can be prepared up to 24 hours ahead of time, depending on how soft you want it. I let it sit a full 24 hours before adding the green beans and parmesan, which was about the right consistency for me (leftovers were also good for the next two days).

The salad is rather green and unassuming, but the flavors are brighter and fresher than you’d expect. Don’t skip the freshly grated Parmesan, which is sure to get any kale-haters to at least give it a try, right?